In a developed country like the United States, most people assume that nearly everyone has access to markets where they can purchase healthy foods to eat. The fact of the matter, however, is that there are “geographical areas in industrialized countries that lack retail stores with healthy, nutritious options.” These geographical areas are called food deserts. [“Food Desert,” mendath] Distance to a store and lack of transportation can also combine to create food deserts. The following graphic shows areas in the United States in which most residents have no car and no grocery store within a mile. 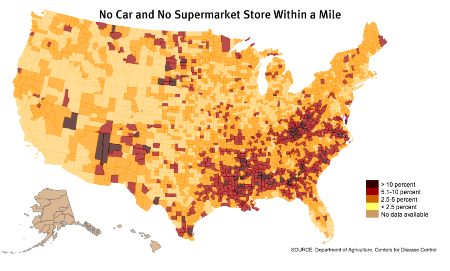 In a recent issue of Bloomberg BusinessWeek, Meg Tirrell focuses on food deserts located in Baltimore, MD. She writes, “One out of five Baltimore residents lives in a food desert. … Those 125,000 people are at higher risk for obesity, diabetes, and heart disease.” [“Fresh Relief for Baltimore’s Food Deserts,” 23 August 2012] The reasons that food deserts exist differ depending on where they are located. In rural areas, there often is not a large enough population to support a full service supermarket. In urban areas, high crime rates can discourage grocery chains from opening stores. Each food desert needs to be dealt with differently and that is where big data can lend a hand. To give you an idea of how data is currently being used to reduce food deserts, watch the following video of a presentation given to TEDx in Chicago by Mari Gallagher.

In previous posts, I have discussed how targeted marketing is going to be the next big thing for manufacturers and retailers. The type of data that is going to make targeted marketing successful can be combined with other kinds of data that can be used to help reduce food deserts. If, for example, an area has a high crime rate and is unlikely to attract a retailer, virtual stores can be offered. That is one of the solutions offered in Baltimore and discussed by Tirrell. She writes:

“Baltimore has pioneered another solution: bringing a virtual grocery store to those living in food deserts. The program, called Baltimarket, allows shoppers to order groceries online from home or attend sessions at a local public library where they can receive help ordering. A delivery arrives later in the week, with no fee for residents. ‘There’s a barrier for people to get groceries,’ says Laura Fox, Baltimarket’s coordinator. Residents who don’t have cars or live near a supermarket may have to pay hacks, or unlicensed taxis, to take them to and from a store, she says. ‘If it costs you $15 to go to the grocery store, how much are you going to go?'”

Since it is unlikely that a virtual grocery store can offer every conceivable product now on the market, targeted marketing techniques can be used to ensure that the most likely requested products are available. Obviously, tastes will change depending on the demographic and/or economic make-up of each food desert. Virtual stores are not the only strategies being used to decrease the number of food deserts. Tirrell reports, “Cities including New York and San Francisco have hired food-policy directors to expand access to fresh produce, promote farmer’s markets, bring in more grocers, and encourage corner stores to offer healthier fare.”

The First Lady, Michelle Obama, has taken a leading role in trying to eliminate food deserts. She has called for retailers to open new stores in areas that now lack them. Unfortunately, that effort has stalled. “After vowing to open more than 1,000 stores selling fresh fruit and vegetables in underserved urban neighborhoods, or ‘food deserts,’ grocers have opened a fraction of them, putting in jeopardy Michelle Obama’s effort to improve food choices for low-income Americans.” [“Michelle Obama’s Food Desert Plan Yields Few New Stores: Retail,” by Leslie Patton, Bloomberg BusinessWeek, 7 May 2012] As Gallagher noted in her TEDx presentation, the goal is to establish food oases that offer healthy and affordable foods. Big data analysis is essential to ensuring that these food oases are established in the right location so that they can make the greatest impact (and, for retailers, offer the greatest potential for profit).

The United States Department of Agriculture (USDA) offers an online map of food deserts. The Centers for Disease Control and Prevention (CDC) are also involved in trying to eliminate food deserts because of the unhealthy impact they have a person’s quality of life. The CDC notes:

“Many scientific studies have suggested that food deserts may negatively affect health outcomes, but more research is needed to determine how access influences the types of foods consumers purchase and eat. Some researchers believe a link exists between access to affordable nutritious foods and the intake of those foods. However, other studies have shown that even after healthier food options are more widely available in food deserts, many consumers continue to make unhealthy choices based on personal preferences.” [“A Look Inside Food Deserts“]

Using targeted marketing techniques, retailers could offer healthier food options that correspond more closely to personal preferences. The CDC site offers strategies that people living inside food deserts can use to improve their diet even if they “struggle with finding affordable fruits, vegetables, whole grains, and lowfat milk and other healthy foods.”

Not everyone agrees that food deserts are a pervasive problem. Gina Kolata reported that two “studies have found something unexpected.” Those studies conclude that poor urban neighborhoods “not only have more fast food restaurants and convenience stores than more affluent ones, but more grocery stores, supermarkets and full-service restaurants, too. And there is no relationship between the type of food being sold in a neighborhood and obesity among its children and adolescents.” [“Studies Question the Pairing of Food Deserts and Obesity,” New York Times, 17 April 2012] It would be interesting to know what data sets these studies used to reach their conclusions. As Mari Gallagher pointed out in her TEDx presentation, how you code stores makes a big difference in the conclusions you reach. Roland Sturm of the RAND Corporation, lead author of one of the studies, told Kolata, that “within a couple of miles of almost any urban neighborhood, ‘you can get basically any type of food. Maybe we should call it a food swamp rather than a desert.” Kolata continues:

“Some researchers and advocates say that further investigation is still needed on whether grocery stores and chain supermarkets in poor neighborhoods are selling produce that is too costly and of poor quality. ‘Not all grocery stores are equal,’ said John Weidman, deputy executive director of the Food Trust, an advocacy group in Philadelphia.”

Kolata goes on to describe briefly the methodology and purpose of the studies about which she writes. The bottom line is the availability of affordable, healthy foods doesn’t mean that people are going to buy them rather in place of unhealthier foods that they prefer eating. However, corporations like McCormick & Company are working with food manufacturers and retailers to develop healthier versions of foods for which individuals have demonstrated a preference. The effort to get people to eat healthier is a long-term effort and it will involve numerous stakeholders. Big data will be one of the essential tools that helps this effort succeed.