Home » Risk Management » Examining the "What Ifs" in Life

Examining the "What Ifs" in Life

Over the past couple of years, I have repeatedly noted that I am a supporter of examining “what if” scenarios, sometimes labeled alternative futures analysis. Read, for example, my post entitled Modeling “What If” Scenarios. As I wrote in that post, “Good planners don’t just extrapolate the present into the future. They engage themselves in alternative futures exercises. They identify the assumptions upon which decisions are being made and question each one of them for their validity. And they ask a lot of “what if” questions.” Pierre Wack is generally credited with creating alternative futures analysis while he was with Royal Dutch Shell. Any resilient enterprise examines alternative futures, especially potential futures that could adversely affect its business model. Resilient enterprises then position themselves to be able to respond if such futures actually evolve.

Not everybody, however, is a fan of alternative futures analysis. “Critics question whether the practice can ever offer value for money. As Nassim Nicholas Taleb, who argued in his book The Black Swan that society is ill-equipped to deal with rare events, told the McKinsey Quarterly: ‘I don’t like scenario-planning because people don’t think out of the box. [It] may focus on four, five or six scenarios that you can envision, at the expense of others you can’t.'” [“A plan for unexpected events,” by Paul Tyrrell, Financial Times, 29 November 2010]. Taleb’s criticism would be fair if scenario planning took place on only one occasion and the scenarios were then frozen forever. That, however, is not how I see scenario planning being used. I prefer the term “what if” analysis, because it implies that anybody can ask a “what if” question about anything at anytime. Every new “what if” question raises new possibilities that should be explored. Tyrrell indicates that there appears to be more proponents of scenario planning than opponents. He writes:

“Imagine a future in which everyone got by on just three hours’ sleep a night; or in which employers were required to hire equal numbers of men and women for every type of job; or in which a technological meltdown persuaded millions to quit their cities in favor of rural self-sufficiency. Now imagine what each of these unlikely scenarios might mean for your business. Such thinking might seem woolly but an increasing number of organizations are trying similar exercises as they struggle to make predictions in turbulent times. The practice of ‘scenario-building’ (or ‘scenario-planning’) can, say its advocates, inform both long-term strategy and present-day decisions but most importantly it can equip senior managers with a mode of thinking that will help them deal more effectively with the un­expected.”

According to Tyrrell, “the three scenarios described above [were created] as talking points for the Women’s Forum for the Economy and Society, a global advocacy group.” Are they scenarios that are likely to emerge? Probably not. The principal reason that I like scenario planning has little to do with the scenarios developed. As Tyrrell points out, “what if” exercises “equip senior managers with a mode of thinking that will help them deal more effectively with the un­expected.” Taleb was surely correct when he indicated that people simply are unable to imagine every possible scenario. Like any exercise, however, the purpose of scenario planning is more than just planning for the unexpected. Participation in such exercises flexes the mind so that one is better equipped to deal with the unexpected when it actually happens.

“Organizations know they must prepare for more turbulence, … given the world’s economic imbalances, environmental pressures and so on [says Luc de Brabandere, a partner and managing director at the Paris office of Boston Consulting Group]. But they are not sure how to do it, given the ever-increasing number of variables they might consider – the deluge of market information now available via the internet, for example. ‘If you’re trying to make long-term plans, then the future is so far away and so many things can happen in the meantime that the brain gets lost. What you need is a way to organize your thinking.'”

I believe it is the deluge of information now available that makes “what if” analysis so valuable. It allows you to parse and combine information in creative ways that can stimulate interesting discussions and help generate flexible responses. Tyrrell continues:

“In 2000, it was used regularly by about 35 per cent of companies, according to the Management Tools and Trends survey, published every two years by Bain & Company, the consultancy. After the terrorist attacks of September 11 2001, this figure rose sharply to reach 70 per cent by 2002, before falling back again. Today, it stands at about 42 per cent, and rising, as companies use scenario-building ‘to search for innovative ways to remain competitive and emerge from the downturn in a stronger position’.”

One of the companies that has made its name doing scenario planning is Global Business Network. Peter Schwartz, Chairman of GBN, wrote a best seller on the subject entitled The Art of the Long View. GBN has been involved with scenario planning since 1987 and obviously doesn’t believe that it is a passing fad. Tyrrell continues:

“If this seems faddish, it is only because so many companies have judged scenario-building on the wrong criteria, says Nick Turner, co-president of Global Business Network, a consultancy. Scenarios are not forecasts, says Jeremy Bentham, Shell’s vice-president for the Global Business Environment and Mr Wack’s present-day successor. ‘Forecasts can have value in the short term but they’re at their most unhelpful precisely when you need them most – when discontinuities are occurring.’ Scenario-building, by contrast, aims to develop situational awareness and identify future ‘critical uncertainties’.”

“The new style of scenario-building is one in which the imagined futures need only be plausible, rather than probable, with the aim of preparing leaders for the unexpected. According to Mr Brabandere, demand is rising for ‘a swifter, simpler approach’ that ‘trades a lower level of detail and specificity for drastically increased speed and greater impact on the business’. Even a short scenario-building exercise can, he says, be very useful.”

Tyrrell points out that the timeframe for scenario building differs depending on the sector involved. Military scenarios, for example, must consider how long it takes to acquire new weapons systems. You can’t simply change strategies, equipment, and training overnight. As a result, military scenarios are often placed some 20 years in the future. Tyrrell indicates that energy companies may have even longer timeframes (i.e., 50-year outlooks). Companies in other sectors, like financial services, will probably have a much shorter “long-term” outlook (i.e., 3 to 5 years). In a side bar, Tyrrell provides some suggestions about how to build your own scenario:

“Involve leadership. ‘You can’t just instruct your planning department to go away for six months, do some scenario-building and come back with a report,’ says Nick Turner at Global Business Network. ‘This needs to be a co-creative process, with emotional resonance.’

“Combine internal and external perspectives. Shell’s scenario-building team communicates regularly with a global network of contacts: about 150 inside the organization and about 250 outside.

“Aim for variety. Don’t just produce one scenario but three or four at least. ‘Imagine you were in Hollywood and you had to produce three movies with the goal of attracting as many people as possible,’ says Luc de Brabandere at Boston Consulting Group. ‘You would not choose three scripts that were all science-fiction or all thrillers.’ The problem with many organizations is that they only perceive one scenario in their future, and that is ‘dangerous’.

“Communicate vividly. To resonate with stakeholders, a scenario has to be shown vividly and not too conceptually, suggests Mr Brabandere. So be creative in the way you imagine each one, using a variety of media and elements that are instantly memorable, such as witty neologisms or funny characters.”

Sometimes scenario planning has immediate impact. Two of my colleagues, Tom Barnett and Bradd Hayes, facilitated a number of alternative scenario workshops before joining Enterra Solutions®. One of their clients was a community development organization that was created after the Second World War to attract businesses to the city. The organization had a 50-year charter that was just about to expire. Organization members were at a crossroads as to whether to dissolve the organization according to the rules established in the charter or continue in some other form. This was a matter of some importance because the group still had millions of dollars in its coffers and they had to decide what to do with the money. To help the group consider their alternatives, Barnett and Hayes set up two simple X-Y frameworks that clearly laid out the alternative futures from which they could choose. Their discussions involved all of Tyrrell’s recommendations listed above except one — there were no “black swans.” The organization was either going to reorganize in some new way or dissolve and disburse the money. The only “black swan” would have involved a member of the group absconding with the funds. An X-Y framework permits a group to look at two “what if” questions simultaneously and generate an interesting scenario in each of the four resulting quadrants. In the case at hand, the questions in the first framework surrounded the survival and relevance of the organization. 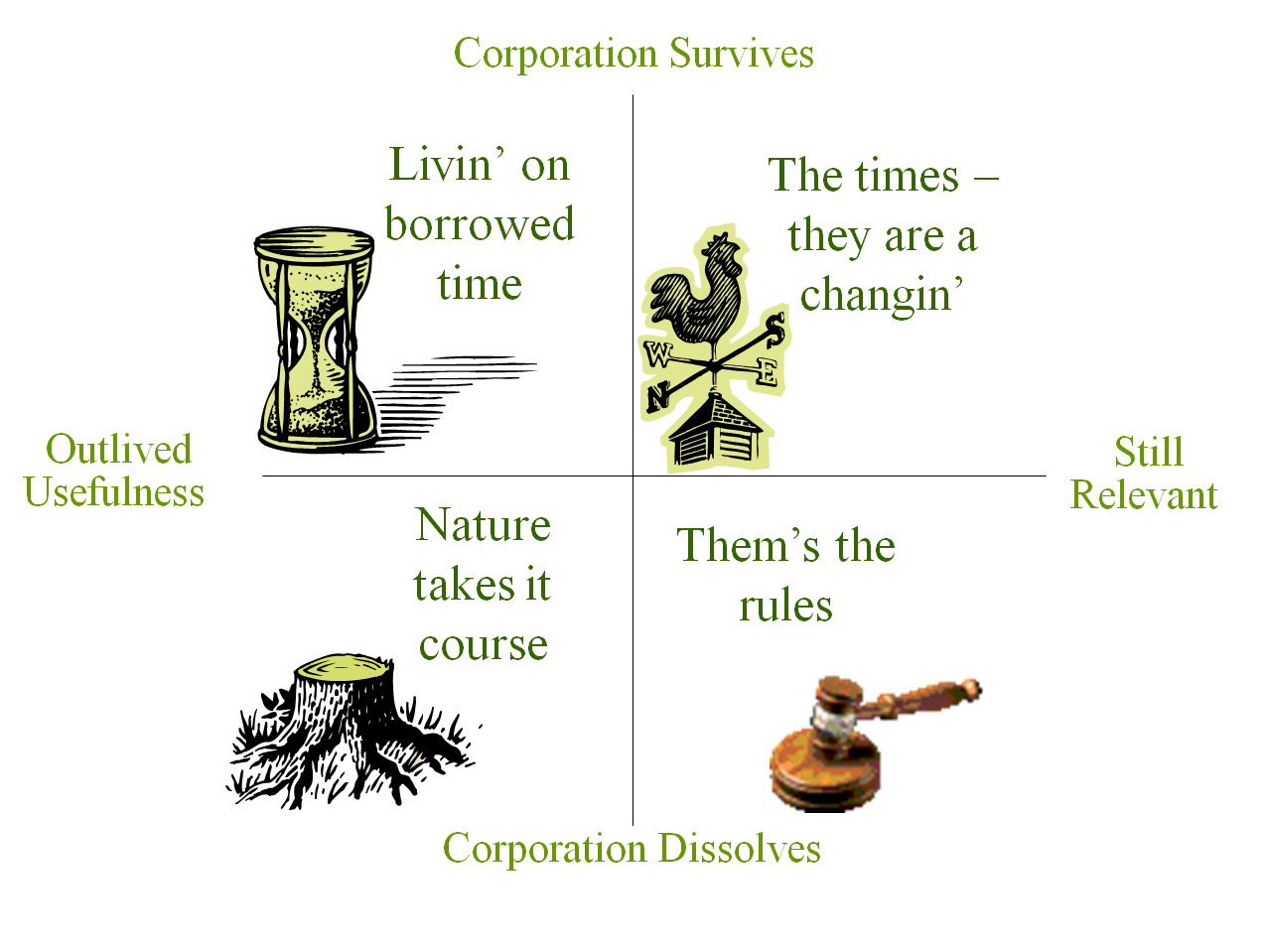 As Tyrrell recommends each scenario was labeled so that participants would instantly understand what was involved without having to go into a lot of detail. The choices were stark and the discussions lively. The group decided that it wanted to recharter itself and continue to use its funds to benefit the community. That led to a second X-Y framework that discussed who would use the money and how. 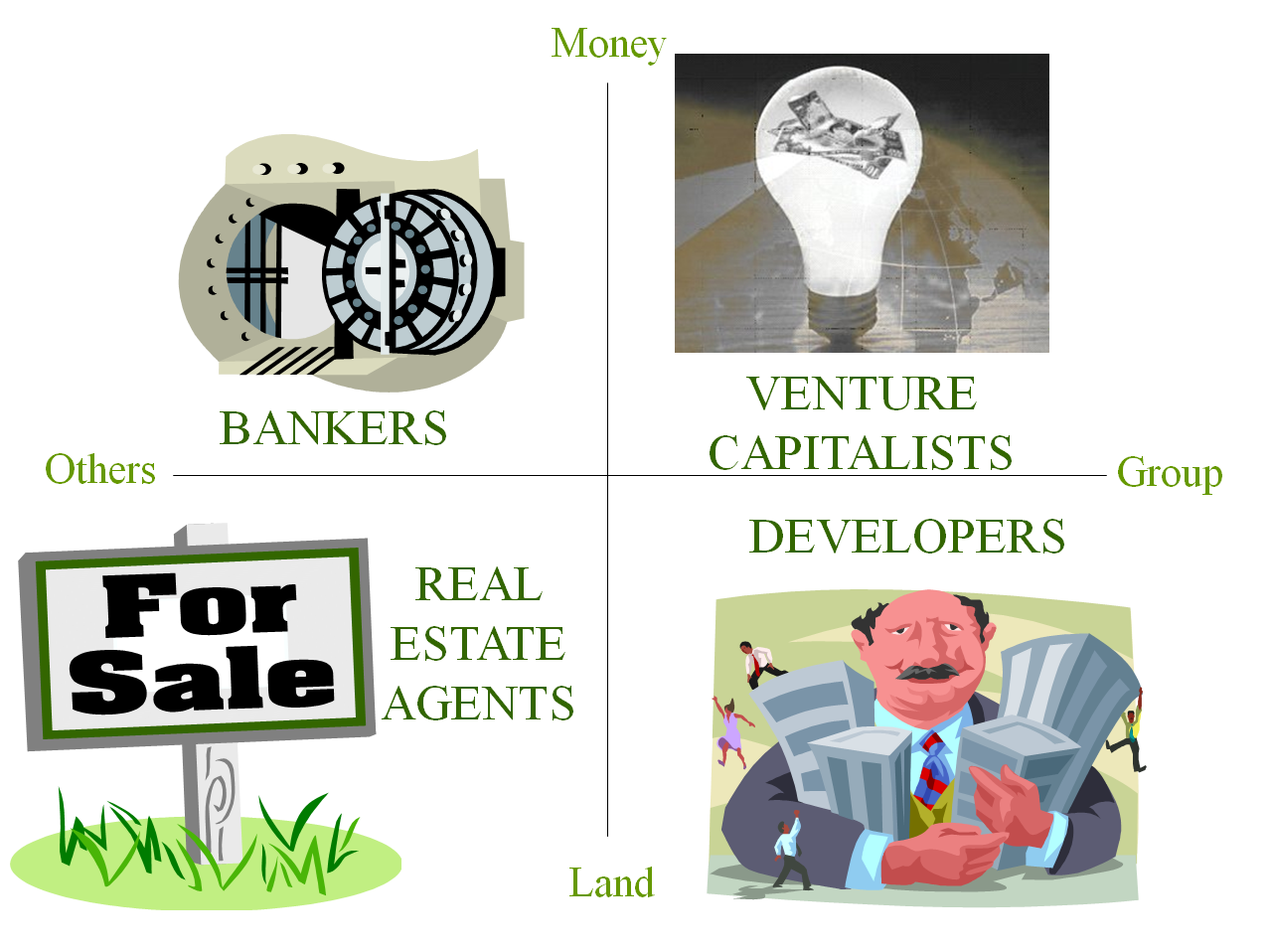 Because the group had made most of its money in real estate investments, the question at hand was whether to continue to invest in real estate or get out of the real estate business and just deal with money. Because a lot of money was involved, participants were torn between investing it themselves or hiring others to do the work for the group. Again the scenarios were labeled so that participants readily understood what was involved and the choices they had before them.

Not every organization’s future has such clear cut alternatives. That’s why Tyrrell and others recommend variety. My recommendation is to ask those who will be participating in an alternate futures exercise to come armed with at least ten “what if” questions that could affect the future of the organization. Those questions can then be winnowed down to a reasonable number that can be thoughtfully pursued during the course of the exercise. Companies are bound to find a few “black swans” among the questions. “What if” exercises should be conducted before a crisis erupts. Once the crisis is at hand, leadership will be dealing with too many alligators to consider the long-term alternatives for the future of the swamp.