Home » Business » The Evolution of the Grocery Store 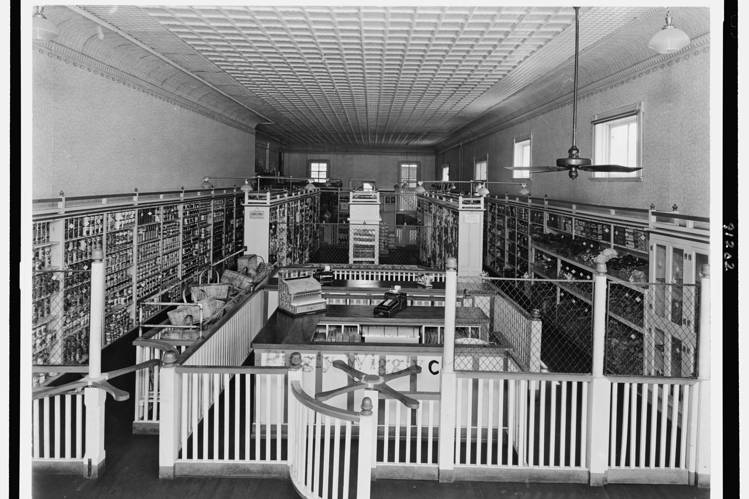 The Evolution of the Grocery Store

We’ve all seen western movies that include a scene in which a calico-clad frontier woman tells the owner of the town’s General Store what items she wants to purchase. The General Store owner dutifully handpicks those items from off his shelves, while other customers dutifully wait to be served. Those frontier retail establishments were “general” stores since they carried much more than food staples. Since people grew much of their own food, the General Store relied on the sale of other items to stay in business. Even though today’s supermarkets can trace their roots general stores, they weren’t really grocery stores as we now think of them. The evolution of the General Store into a Grocery Store owes a lot to a man named Clarence Saunders who opened the first Piggly Wiggly in Memphis, TN, a century ago. Jerry Cianciolo observes, “A typical U.S. supermarket carries 42,000 items: Grab a cart, stroll the aisles and help yourself to an extravagant assortment of goods. Today it’s hard to imagine buying groceries any other way. But self-service was a game-changer when Clarence Saunders opened the first Piggly Wiggly.”[1] He continues:

“The 35-year-old Saunders set out to ‘slay the demon of high prices,’ as he teased in an announcement. He reasoned that shoppers would gladly hand-select their own merchandise, and pay upfront, in exchange for lower prices and faster shopping. … King Piggly Wiggly, as Saunders christened his first store, opened Sept. 6, 1916. It stocked 1,000 products, four times the variety of a typical market. Customers entered through a turnstile and, basket in hand, followed a path through the aisles. Goods were neatly arranged with clearly marked prices, something heretofore unseen. There were even scales for shoppers to weigh sugar and other staples.”

Stores have grown in size since the first Piggly Wiggly was open, new technologies have been introduced, and global food supply chains have been implemented. Each of those changes marked a waypoint on the evolution of the grocery store. The next few years are going to witness even more changes. I provided a glimpse of these changes in a previous article and discuss them further below.[2]

“It’s no secret,” writes Keith Loria, “that one of people’s least favorite parts of the grocery shopping experience is waiting in long checkout lines. And despite advancements in automated technology to make the checkout experience faster and easier, it’s still often cited as the No. 1 reason people dread going to a store.”[3] Amazon believes it has the solution to the dreaded checkout line — no line at all. Loria explains, “Amazon Go, an innovative concept that’s being piloted in a downtown Seattle grocery store lets customers walk in, grab food from the shelves and simply walk out again, without ever having to wait in a checkout line. According to a spokesperson at Amazon, the checkout-free shopping experience is made possible by the same types of technologies used in self-driving cars: computer vision, sensor fusion and deep learning.” Not to be outdone, Walmart is retesting its own self-service technology. Maricris Francisco reports, “With the help of the new Walmart ‘Scan and Go’ mobile app, you will be able to cut short your grocery times. The app works as a self-scanning system where all you have to do is to open the app from your phone or tablet, scan the barcode of your items in an in-app shopping cart using your mobile device’s camera before dropping them in your trolley. You can also opt to add the grocery item manually if the barcode is not functioning or if you can’t find the barcode. Once you have all of your grocery items scanned, check out your online shopping cart, and pay for your purchases. Simply show the receipt from your phone on your way out.”[4]

Anybody who has ever had difficulty using a self-checkout station may have concerns about this new technology. Amazon believes it has worked out the flaws. Loria writes, “Many analysts feel the grocery industry is ripe for change. Consumers’ habits have changed dramatically, and grocery chains have not necessarily kept up. Automation of the customer experience and the removal of friction when buying groceries could bring a true sea change in the category.” Francisco reports, “At the moment, Walmart’s ‘Scan and Go’ mobile app can only be used in Walmart store #5260, which is located in Rogers, Arkansas. However, this could swiftly change if the test run proves to be a hit among the store’s customers.”

Sarah Halzack (@sarahhalzack) reports, “Walmart is America’s largest grocer, and its aggressive expansion of pickup services has turned its parking lots into a laboratory for the future of online grocery shopping — one of the trickiest puzzles in all of retail. … With the pickup model, Walmart is testing whether its best weapon in this digital fight is its most old-school — and hardest to replicate — asset: a network of more than 4,600 stores. It is counting on a different idea of convenience, one that caters to time-starved suburbanites who spend hours each day in their cars. Maybe for them swinging into a parking lot for a few minutes makes more sense than waiting around the house for a delivery.”[5] In some ways, this strategy harkens back to the days of the General Store. Although Walmart is known as the king of big box stores, its latest venture is the size of a large house (about 4,000 square feet). Monica Mendoza (@MMendozaDenBiz) reports, “The idea at the new Walmart store is that customers place grocery orders online and pick them up at the station, where they can also get gas, coffee and snacks, Kretoski said. Also, any Walmart order online can be picked up at the new location, just not same day.”[6]

Halzack notes, “Despite an e-commerce stampede that has upended sales of items such as books, electronics and clothes, researchers estimate that online shopping accounts for 2 percent or less of U.S. grocery sales.” That hasn’t discouraged companies from trying. Halzack notes, “Plenty of companies have tried to carve out a market for this. Instacart, along with tech titans Google and Amazon.com, have put their muscle behind doorstep grocery-delivery models that are similar to what Peapod has offered for decades.” Perhaps the most successful doorstep grocery-delivery business is the UK’s Ocado — the world’s largest online-only grocery retailer. It operates profitably because it is highly automated and trying to get more so. As Baby Boomers age, the enticement of doorstep grocery-delivery models will only increase. Jeff Daniels (@JeffDanielsCA) reports, “Online grocery shopping could grow five-fold over the next decade, with American consumers spending upwards of $100 billion on food-at-home items by 2025.”[7]

Most established grocery chains will likely end up adopting an omnichannel business model that combines many (if not all) of the models discussed above. Kristen Cloud (@KCloudShelby) reports, “Multichannel supermarkets generated larger online orders than online-only grocers, according to a recent benchmarking study from Brick Meets Click. More than half of the banners in the study reported average online orders between $120 and $180, compared to the average order size recently reported for Fresh Direct ($105) and Amazon Fresh ($84). The study compared online orders for the same week from 19 multichannel supermarket banners that offer both traditional and online grocery services. Benchmarks were then developed for four Key Performance Indicators (KPIs): average order size (in dollars), average number of orders per week, lost sales as a percentage of online sales and percentage of orders with lost sales.”[8]

There will always be shoppers who want to pick out their own fresh products rather than trusting the selection to someone else. So-called digital natives, however, have demonstrated a certain amount of comfort with ordering things online. As meal providers like Hello Fresh and Blue Apron demonstrate that strangers can be trusted to select prime ingredients, the comfort level of letting others select fresh products will likely increase. All the signs point to a growing trend of omnichannel grocery chains. 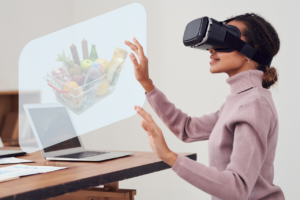