In a number of past posts about the Enterra Solutions® Development-in-a-Box™ approach, I’ve noted the importance of business clusters. In one of those posts, I discussed a concept called “geographical stickiness” in relation to technological development and innovation. The concept supports Michael Porter’s theory that competitive clusters built around natural advantages are essential for competing in a globalized world. In another post, I noted that “creative people like being around other creative people and when smart people from one discipline get together with smart people from another discipline great things generally happen. That is probably the best argument for clusters. But clusters need not be big to be effective. Universities have effectively established campus clusters that have inspired great ideas and entrepreneurial enterprises, even if they are not located in large metropolitan areas.” An article in the Financial Times claims that “clusters of companies in similar sectors can enable more start-ups and higher productivity” [“The added value of a group,” by Paul Tyrrell, 6 July 2010]. Tyrell reports:

“Babel Media is a company that could, in theory, be based anywhere. It provides the video games industry with outsourced services such as localization and quality assurance. Most of its 1,000 staff need only computers and reliable internet connections to do their jobs. Yet they are concentrated in just a handful of places worldwide to take advantage of specific local conditions. The company was founded in 1999 in Brighton, on the south coast of England, partly because the city has one of the highest concentrations of young foreign workers and students in the UK. Its latest production office was opened in 2005 in Montreal, Canada – again a source of young, multilingual talent but also, critically, home to one of the world’s fastest-growing ‘business clusters’ for video games production.”

Tyrell acknowledges that the idea of clusters was first examined by Michael Porter. He continues:

“The concept of the business cluster has become an increasingly important part of regional development and corporate strategies since 1990, when Michael Porter of Harvard Business School published The Competitive Advantage of Nations. In the book and subsequent research, Prof Porter found that as more companies of the same type cluster together in the same place, so they derive more benefits from their ‘colocation’. Companies have long recognized that siting themselves near to rivals could make life easier for customers, cut supply chain costs, and – most important – make it easier to recruit specialists. However, Prof Porter identified other benefits such as increased productivity, innovation and start-up activity.”

Tyrell’s article begs the question, “Why is someone writing about a 20-year-old idea?” Tyrell explains that the reason he wrote about the importance of clusters is that Porter is releasing another paper on the subject.

“In his latest paper on the subject, written with Mercedes Delgado and Scott Stern and due to be published this month, he finds that strong clusters produce ‘higher growth in new business formation and start-up employment’ and ‘contribute to start-up firm survival’.”

As headlines in the United States continue to remind readers, current efforts to reduce unemployment have been woefully inadequate. As a result, the Great Recession is lingering and full recovery continues to remain just over the horizon. I have consistently stated that the best way to create jobs is to foster conditions in which entrepreneurs can flourish. If Porter is correct, finding ways to strengthen clusters is one way to promote start-ups that survive and thrive. Tyrell describes why Babel Media decided to join the tech cluster in Montreal:

“For Babel Media, the benefits of being part of the Montreal cluster are numerous, says Steve Kingswell, the company’s chief financial officer. ‘It provides an enhanced labor pool, so recruiting is easier,’ he says. ‘The colleges and universities here are encouraged to offer courses in the creative media and technology, and research in the universities gets tailored to our industry. Also, the companies in the cluster can lobby together for changes in the locality.’ The decision to open an office in Montreal, however, was largely influenced by generous incentives from the Quebec government. Software producers in Montreal can, for example, claim tax relief on up to 30 per cent of the salaries of their production staff, or up to 37.5 per cent if their work is published in French.”

Tyrell notes that the Quebec government is not alone in trying to strengthen local clusters. “Other governments,” he reports, “are employing similar tactics to help create jobs and lure businesses.” Tyrell reports that Porter thinks they are doing the right thing.

“‘There is a growing realization that just working on the framework conditions for growth (say, good infrastructure and education) is insufficient,’ explains Prof Porter. In the past, he argues, national governments have either tended to think too broadly, focusing only on general business environment conditions, or too narrowly, cherry-picking ‘winners’ in specific sectors by giving them special treatment. For companies, a cluster can offer a raft of benefits, provided its members start talking to each other.”

In looking forward, sometimes it helps to remember the past. Tyrell provides a short history lesson of how Porter learned about the power of clusters:

“Prof Porter learnt this in Massachusetts in the mid-1990s, he says, while chairman of the state’s Governor’s Council on Economic Growth and Technology. ‘We discovered that we had about 400 medical device companies in the state, but these firms didn’t see themselves as part of a cluster,” he recalls. All were benefiting in various ways from their colocation – for example, the cluster had drawn a high number of parts suppliers to the region – but there was no co-ordination. Prof Porter organized a networking event for the chief executives of the top 25 companies in the cluster, at the headquarters of a leading defibrillator manufacturer. ‘All these CEOs – some of whom were rivals – came only because the governor invited them,’ he says. ‘For the first hour, they were all looking at their watches and dying to leave. But then we asked them to identify the most important challenges they were facing.’ All were concerned about how to plug certain skills gaps and about the inefficiency of the regulator, the Food and Drug Administration. ‘Suddenly, they began to see how they could help each other.’ The meeting led to the establishment of the Massachusetts Medical Device Industry Council, an organization that now collaborates with local colleges on curriculum and skills development, and provides cluster companies with export assistance – all with minimal government intervention.”

Porter goes to explain that even though governments can help foster conditions for clusters it’s only when people involved in a cluster come to “own it” that the cluster becomes a viable entity.

“‘The less the companies feel responsible [for cluster development], the more these things tend to peter out,’ says Prof Porter. Michel Guay agrees. He is the CEO of Group Techna, a developer of software for the law enforcement sector, and the chairman of Techno-Montréal, the official steering group for Montreal’s information and communications technology cluster. The board of his cluster includes representatives from municipal, provincial and federal governments, ‘but only as observers’. Official cluster activities are financed by 15 corporate members, which represent a cross-section of the sector and a variety of company sizes. Their combined contributions are then matched by each of the three levels of government, quadrupling the amount of money available. Each year, the government members of the board approve the cluster’s three-year strategy, based on success criteria such as job creation, but that is as far as their intervention goes. ‘The government observers actually appreciate it when we ask for, say, better high-speed internet infrastructure, because they know they will get a good return on their investment. We are speaking on behalf of about 3,000 job-creators,’ says Mr Guay.”

As I noted in one of my earlier posts mentioned above, not every cluster is created equal. Clusters are, first and foremost, geographically based (i.e., they occupy real estate) and the first rule when valuating real estate is location, location, location. Tyrell continues:

“Other cities and regions – notably in the US and elsewhere in Canada – have adopted or are adopting similar financial incentives in order to attract video gaming talent. However, research by Richard Florida, an urban studies theorist based at the Rotman School of Management in Toronto, suggests their success will depend on other factors. Montreal is ‘a key center for emerging musical acts’, he points out. It is a great place to live, with a healthy stock of affordable housing. Overall, the city helps its clusters by ‘being open to creativity, mixing it with history and facilitating what we called “spill-acrosses” from technology to art and entertainment’. Governments can help clusters become the ‘go to’ destinations for particular industries, he concludes. ‘But it takes time. And it takes sustained investment in great universities and in people and, of course, in the physical fabric of the place.'”

I like the concept of “spill-acrosses.” I think it is a complementary idea to Frans Johanssen’s “Medici effect.” You can’t get “spill-acrosses” if people don’t connect. A graphic that accompanied Tyrell’s article (shown below) demonstrates the central role that cluster organizations play in holding clusters together. 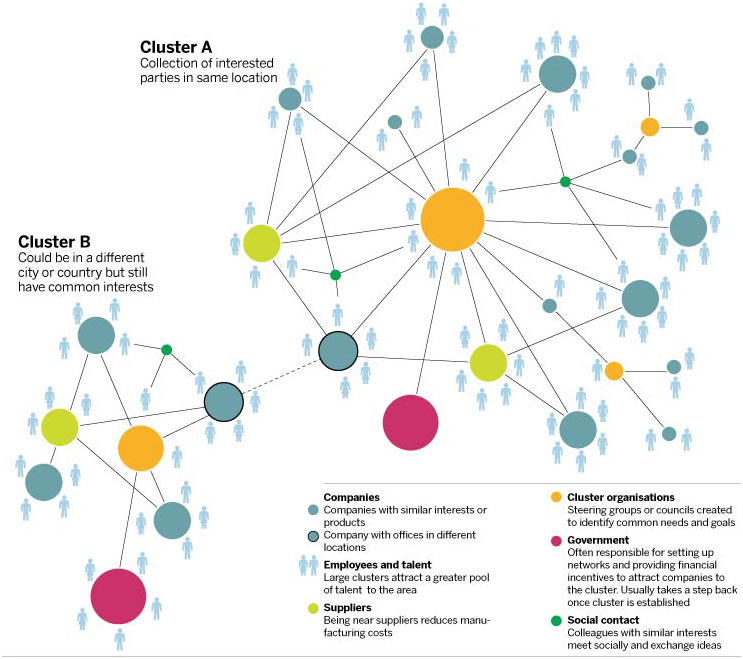 Sometimes, like in Maryland, two “cluster organizations” merge to form a single association. In 2006, MdBio merged with the Tech Council of Maryland (TCM). According to its web site, TCM is the largest technology trade association representing over 500 tech and biotech companies, along with government, academia and service providers, who employ more than 250,000 people in Maryland and the region. Creative people and innovative companies thrive on stimulation. They appreciate good architecture, good food, great art and music, good education, and associating with other creative people/organizations. Fill a space with a balance of education, arts, technology, and good governance and you’ve got the makings of a great cluster. It may, like in Boston, take government intervention to get a group talking; but, smart people understand the value of connections and will generally keep them going.