Home » Innovation » Do You Play a Role in Innovation? 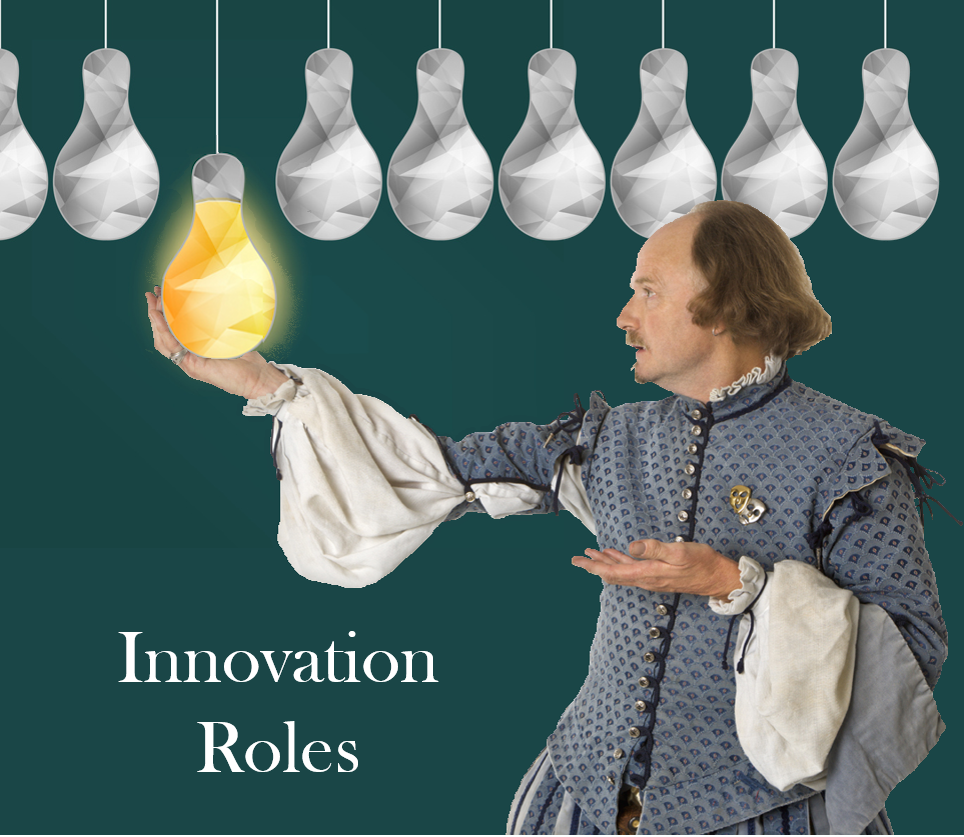 Do You Play a Role in Innovation?

“All the world’s a stage,” wrote William Shakespeare, “and all the men and women merely players. They have their exits and their entrances, and one man in his time plays many parts.”[1] Although Shakespeare was writing about life in general, he could have been writing about the roles people play in the innovation process. Over the years, innovation gurus have identified a number of different roles (or personas) people play on innovation teams. One of the earliest examples of how innovation flourishes when a diverse group of people gathers to exchange ideas was found at the court of the Medicis — a powerful and wealthy Italian family that assembled some of the Renaissance’s best thinkers and artists in Florence. The combined intellect of those artists, philosophers, theologians, and scientists combined to help burst the historical pall known as the Dark Ages. In his very interesting book The Medici Effect: Breakthrough Insights at the Intersection of Ideas, Concepts, and Cultures, Frans Johansson writes about the value of creating a space in which people from diverse fields of expertise can gather to exchange ideas. In today’s corporate environment, putting together an innovation team made up of a diverse group of people from different disciplines — each playing a role — is one of the best ways to foster the chances of success.

Personas on the Innovation Stage

What makes a great innovation team? One answer is diversity. Some of the world’s greatest innovations have come about because experts from different disciplines have collaborated. Diverse teams are effective because individuals from various disciplines bring with them unique perspectives. A truly great team is one that can look at a challenge from all angles. That simply can’t happen if everyone on the team shares the same kind of background, expertise, and world view. Over the years, innovation gurus have identified a number of individual roles that need to be filled in order to enhance a team’s innovation process. Below are a few of the roles innovation teams require to be filled — and, as Shakespeare noted, a single person often plays many parts.

The Explainer: Companies innovate when they find a new way to solve a problem. The first step in the innovation process is understanding the problem and why it needs solving. Every group needs an explainer who can make the group understand the task before them.

The Know-It-All: Someone in the group needs to have the data, facts, and figures that grounds the team in reality. The know-it-all is the individual who provides what has been called “White Hat” or critical thinking. Critical thinking ensures the team will eventually analyze ideas objectively using information from all possible sources, and rationally evaluate all courses of action. In today’s technologically-advanced environment, the know-it-all doesn’t really need to know it all. They may be the person who leverages cognitive technologies (aka artificial intelligence), like the Enterra System of Insight and Actions®, to help the team understand market trends, identify consumer preferences, and glean other actionable insights.

The Crazy Idea Person: Not all ideas are great. Nevertheless, studies have shown that the most creative people are those who constantly come up with new ideas. The more the better. Adam Grant (@AdamMGrant), a professor of management and of psychology at the Wharton School, University of Pennsylvania, insists the best way to become more creative is to generate a constant stream of ideas — be they good or bad. He insists, “Some of the most original people in history achieved their level of fame or legend because they wouldn’t stop coming up with ideas.”[2]

The Questioner: Curious people ask questions. It’s a great trait. Katherine Graham-Leviss, founder and president of XBInsight, believes one of the most important traits an innovative leader can possess is curiosity. She explains, “They exhibit an underlying curiosity and desire to know more. These leaders will actively take the initiative to learn new information, which demonstrates engagement and loyalty to company goals. Keeping their skills and knowledge current gives them the competitive edge they need to lead effectively, and also stimulates new ways of thinking in other workers.”[3] Being curious, however, isn’t enough. The questioner doesn’t just ask questions, they ask good questions. Bad questions can send teams off on tangents and generate needless arguments. Einstein once wrote, “The important thing is to not stop questioning. Curiosity has its own reason for existence. One cannot help but be in awe when he contemplates the mysteries of eternity, of life, of the marvelous structure of reality. It is enough if one tries merely to comprehend a little of this mystery each day.”[4]

The Futurist: The futurist also asks questions — mostly “what if” questions. The futurist’s role is to help the group escape from the past and the present and critically face future challenges or opportunities they might not have otherwise considered. The futurist might, like any good science fiction write, also be a great storyteller.

The Storyteller: The storyteller is closely related to both the explainer and the futurist. Their role is help others see possibilities and help the group develop methods to sell their ideas to others in the organization. The world is a complicated place that only gets more complex as new knowledge is created. Without storytellers, skilled in the use of analogies, new ideas have a difficult time gaining traction. Jennifer Aaker, a marketing professor at Stanford University, insists, “Treating stories as assets is an underrealized idea right now.”[5]

The Consolidator: The consolidator has the special skill of seeing how disparate ideas can combine to create something new. Combining ideas is at the heart of creative thinking. Divergent and convergent thinking are only two of the activities that individuals and groups must participate in to achieve success. Divergent thinking (the creation of number of ideas) should be followed by idea organization (so that relationships can be identified and understanding enhanced). Next comes evaluation. Ideas are not all created equal. They need to be evaluated so that the most time is spent pursuing the most promising ideas. Once the evaluation is underway or complete, convergent thinking plays a vital winnowing role. During the convergent thinking phase, shared meaning between ideas (and, if applicable, participants), is fostered. Finally, consensus through agreement and mutual commitment is built through consolidation.

The Administrator: Ideas don’t magically turn into innovations. It takes decisiveness and hard work. That’s where the administrator plays a role. Management guru Gary Hamel knows that change is not easy and is often challenged.[6] All of the factors in what Hamel calls the “change formula” need to be present. The change formula is often expressed as D x V x P > C — where D = Dissatisfaction with the current state; V = Clear vision for change; P = Process for getting it done; and C = Cost of change. The administrator takes the inputs and efforts of all other role players then champions the process for getting things done.

The Killer: The killer has a role to play both during the initial innovation process and after the administrator has started implementing ideas. Sometimes getting passionate about a bad idea can hurt rather than help a company. Isabelle Royer asserts, “[Failures often result] from a fervent and widespread belief among managers in the inevitably of their projects’ ultimate success. … The result is what I call collective belief, and it can lead an otherwise rational organization into some very irrational behavior.”[7] The killer is the person who finally puts an end to irrational behavior.

Recognizing that a variety of roles must be played in the innovation process can help companies perform better. Innovation isn’t easy. It’s an all-actors-on-stage effort. And, as Shakespeare noted, all men and women are merely players. They have their exits and their entrances, and each in their time plays many parts.