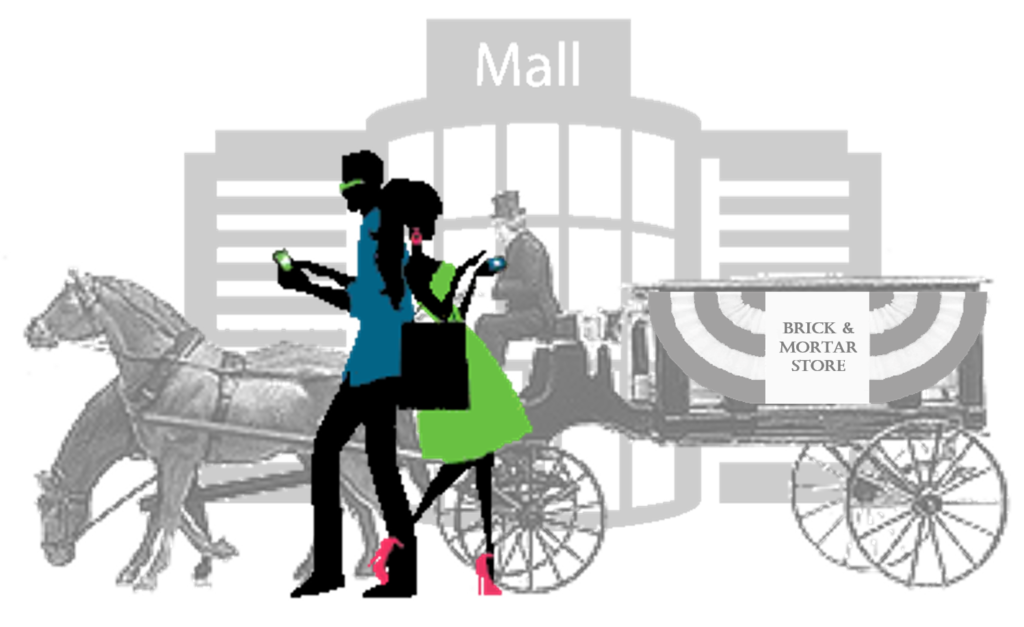 Retailers should have been smiling this past holiday season. Paul Ziobro (@pziobro) reports, “Estimates from retail research firms suggest sales growth in the [holiday] period — which spans from Nov. 1 to the end of December — could outpace that of recent years.”[1] Unfortunately, business leaders are playing a dirge rather than a ditty for traditional brick-and-mortar stores. The reason is eCommerce and the digital path to purchase proved to be the big winners this holiday season. Krystina Gustafson (@KrystinaGustafs) reports, “Retailers rang up a record $91.7 billion in online sales over the holidays, an 11 percent increase year on year.”[2] On the other side, a spate of store closings were announced both before and after the holiday season.

Mobile Technologies and the Digital Path to Purchase

According to Gustafson, mobile technology drove the increase in online sales this past holiday seasons. “Mobile devices raked in $28.4 billion,” she reports, “an increase of 23 percent over the prior year. The majority of that value came from smartphones, which generated $19.3 billion in revenue. Of the 61 days that made up the November and December holiday shopping season, 57 were billion-dollar days, Adobe said. That included record results on Black Friday and Cyber Monday. ‘It’s not just the total online sales figure that made this a historic holiday shopping season,’ Tamara Gaffney, principal analyst and director at Adobe Digital Insights, said in a statement. ‘This year, Black Friday set a new record by surpassing the $3 billion mark for the first time… We also saw big gains in mobile spend, with Black Friday becoming the first day in retail history to drive over $1 billion in mobile revenue.'”

As noted above, numerous store closings were announced both before and after the 2016 holiday shopping season. In September, Charis Rebecca Brown (@Charisnotparis) listed all of the major retailers that had announced 100 or more stores in the near future.[3] They are (in alphabetical order):

To that list you can add The Limited, which announced it would be closing all of its 250 stores.[4] Courtney Reagan (@CourtReagan) reports, “Many retailers reported choppiness in the all-important holiday selling season, with consumers slowing their shopping — particularly in early December — more than expected. Despite a spike at the end of the season, RetailNext data gathered from hundreds of stores found that sales and traffic fell double-digits.”[5] In an interesting twist to this story, the Pew Research Center found that Americans claim they still prefer shopping in-store to online. The Center’s poll found “64% of Americans still prefer buying from brick-and-mortar stores: 78% say it’s important to be able to try a product out in person, 77% want advice from people they know.”[6] At the same, the poll found “74% at least want to be able to read reviews, with 45% using their phones to look up reviews or compare prices while in stores.” In other words, even among people who prefer traditional shopping, the digital path to purchase is a touchpoint.

Rise of the Digital Path to Purchase

That same Pew poll determined, “79% of Americans have made an online purchase of some type, up from just 22% when Pew first asked about online shopping activity 16 years ago. In addition, 51% have bought something using a smartphone and 15% have made a purchase by following a link from a social media site.” If you want further anecdotal evidence that retailers have finally figured out that the consumer digital path to purchase is the future of retailing, look no further than Walmart, the king of big box stores. Walmart recently purchased Jet.com, one of the fastest growing eCommerce companies in the U.S.,[7] and Jet.com, just acquired ShoeBuy, a Boston-based eCommerce site that has been selling loafers, sneakers, and stilettos online since 1999.[8] If you need further evidence, Slice Intelligence analysis determined that during this past holiday season Lowe’s online sales grew 58 percent, Home Depot online sales grew 40 percent, Best Buy online sales grew 31 percent and Wayfair online sales grew 27 percent.[9]

Concerning the Pew findings, Daphne Howland (@daphnehowland) writes, “There aren’t a lot of surprises in Pew’s research — the data matches up with other research indicating that e-commerce continues to grow, aided by smartphones and social media, and that younger people are more likely to be mobile shoppers. Some 90% of Americans ages 18 to 29 buy online, while 77% have purchased something using their phones and 24% have bought something following a social media link. By contrast, 59% of those 65 and older have a habit of buying online, just 17% have bought something using phones and 5% have done so through a social media link.”[10] A study conducted by xAD and Millward Brown “examined shopping behaviors in five countries (U.S., U.K., Germany, China and Japan)” and found “once a consumer starts researching products on their smartphone, the actual purchase of a product is pretty close behind.”[11] Like the Pew Poll, the xAD/Millward Brown study found, “In the U.S., the final purchase is most likely to occur in a physical store, which is not the case in some other countries.” Chuck Martin (@chuckmartin), reporting on the study, writes:

While more consumers in Japan make purchases on their phones, U.S. shoppers head to the store for that final purchase. For example, 67% of consumers in the U.S. make a trip to the store to complement their mobile research compared to fewer than half (45%) in Japan. The real key in all of this is that once consumers start researching on their phones they are in the market to make a purchase relatively soon. Mobile research is the beginning of the intent to purchase cycle.”

Although traditional brick-and-mortar stores are not going extinct, retailers must adjust to the fact most consumers are going online sometime during their path to purchase. Omnichannel sales is becoming the norm and eCommerce is on the rise. From all of the announced store closures, it appears most retailers are still trying to figure out the best omnichannel strategy for their particular business. For those mastering omnichannel sales, the future appears bright. If brick-and-mortar stores were truly doomed, Apple wouldn’t have been singled out as the fastest growing retailer this past holiday season and Amazon wouldn’t be opening its own brick-and-mortar stores.