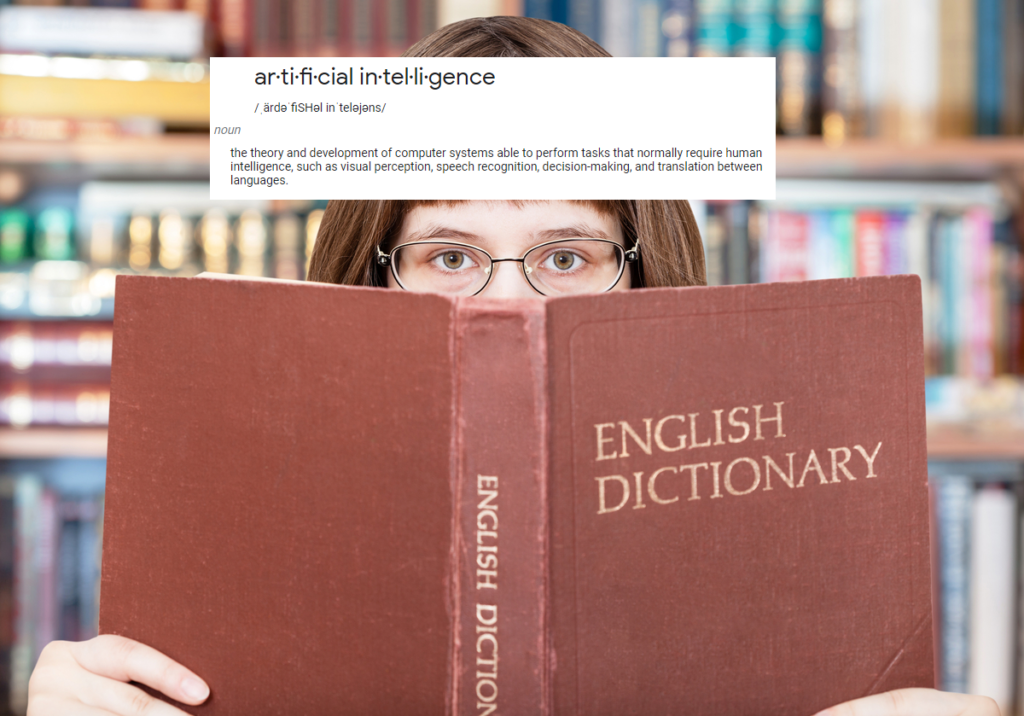 Definitions are essential for helping us understand the world. According to the Merriam-Webster Dictionary, a “definition” is “a statement of the meaning of a word” or “a statement expressing the essential nature of something.” Unfortunately, when it comes to defining the term “artificial intelligence” (AI),” there is little clarity. Eric Siegel (@predictanalytic), a former computer science professor at Columbia University, writes, “A.I. is a big fat lie. Artificial intelligence is a fraudulent hoax — or in the best cases it’s a hyped-up buzzword that confuses and deceives.”[1] Arvind Narayanan (@random_walker), an associate professor at Princeton, asserts, “Most of the products or applications being sold today as artificial intelligence are little more than ‘snake oil’.”[2]

Lack of clarity is a problem when one understands that AI algorithms are having a significant impact in our lives. Joanna J. Bryson (@j2bryson), an academic expert in both natural and artificial intelligence, recently published an article entitled, “Europe Is in Danger of Using the Wrong Definition of AI.”[3] She begins her article this way: “What does it mean to be artificially intelligent? More than an endless parlor game for amateur philosophers, this debate is central to the forthcoming Artificial Intelligence Regulation for the 447 million citizens of the European Union. The AI Reg — better known as the AI Act, or AIA — will determine what AI can be deployed in the EU, and how much it costs an organization to do so.”

What is Artificial Intelligence?

The term “artificial intelligence,” as it is widely used today, is an umbrella term under which rest a number of related technologies. That’s why Siegel and Narayanan have such problems with it. And that’s why Anthony Bradley (@BradleyAnthonyJ), a Group Vice President in Gartner’s Technology and Service Provider research practice, concludes, “Artificial intelligence is, at its core, a marketing term.”[4] He adds, “It is a brilliant marketing term as inaccurate as it is prevalent. … The term has captured people’s imagination for over 60 years. It has, to some degree, propelled the field forward. But it has also generated an unprecedented amount of destructive hype.” To make his point, Bradley provides a few AI definitions he has gathered: 1) “[AI is] the ability of a digital computer or computer-controlled robot to perform tasks commonly associated with intelligent beings”; 2) “[AI is] the capability of a machine to imitate intelligent human behavior”; and 3) “[AI involves] machines that can understand or learn anything that a human being can.” Let’s look at a few more definitions.

• Walt Mayo, CEO of expert.ai, writes, “Artificial intelligence is any technology that tries to replicate some broader aspect of human intelligence. I emphasize ‘broader,’ as that’s where a fair amount of confusion emerges. Think, for example, of the ability to perform arithmetic. Most people would agree that this capability is uniquely human. But I doubt anyone would conclude that a calculator is built on artificial intelligence. It’s the broad capabilities that involve higher-order compound intelligence that makes the difference. … One of the key elements is that AI does more than just capture data and perform a predetermined task. … AI goes a step beyond this by applying some degree of ‘intelligence’ to interpret the data and offer a next level of insight. But that’s still short of a far more complex and elusive element of human intelligence.”[5]

• Science and technology journalist Kieron Allen (@_allenk) writes, “Artificial intelligence is a branch of computer science concerned with the development and study of machines that are capable of learning, making decisions, planning, problem-solving, and demonstrating other features of natural (e.g., human) intelligence.”[6]

• Darrell M. West (@darrwest), Vice President and Director of Governance Studies at the Brookings Institution, writes, “Today, AI generally is thought to refer to ‘machines that respond to stimulation consistent with traditional responses from humans, given the human capacity for contemplation, judgment, and intention.’ According to researchers Shubhendu and Vijay, these software systems ‘make decisions which normally require [a] human level of expertise’ and help people anticipate problems or deal with issues as they come up. As argued by John Allen and myself in an April 2018 paper, such systems have three qualities that constitute the essence of artificial intelligence: intentionality, intelligence, and adaptability.”[8]

Bradley concludes, “The unifying theme behind most of the common definitions of AI is around imitating or simulating human intelligence. This is where the inaccuracy lies.” He continues, “Let’s for fun try out an alternative and more accurate description of AI. … Artificial intelligence is a computer program that accepts inputs and infers desired outputs using rules-based or statistics-based algorithms. So perhaps a more accurate label than ‘artificial intelligence’ would be ‘inference programs.’ Computer scientists often refer to AI programs as inference engines.”

I think most experts would agree that taking references to humans or human intelligence out the definition makes it more accurate. Indian AI expert Amit Ray (@sriamitray) also manages to define AI without having to reference humans. He writes, “Artificial intelligence is defined as the branch of science and technology that [is] concerned with the study of software and hardware to provide machines the ability to learn insights from data and [the] environment and the ability to adapt in changing situation[s] with high precision, accuracy and speed.”[9] Ray comes close to Siegel’s position that we should abandon the term AI. “The much better, precise term,” Siegel writes, “would instead usually be machine learning — which is genuinely powerful and everyone oughta be excited about it.”

Why the Right Definition Matters

Let’s return to Professor Bryson’s concern that the EU is in danger of using the wrong definition of AI. She writes, “What the EU set out to address with the AIA is this: When and how can we allow artifacts to take actions? What system of development and of operations should be in place to ensure that AI systems are safe, effective, and socially beneficial? How can we ensure that those who develop and operate intelligent systems make them trustworthy and equitable?” She adds, “To answer these questions, we must understand what, exactly, the EU is trying to regulate. What is artificial intelligence? A recently popular joke says that AI is neither intelligent nor artificial. It’s true that AI is ‘real’ and present, but nothing matters more in terms of regulation than its artificiality — its constructedness. And here’s where we’re in danger of the European Parliament being misled.”

Even though the current draft of the AIA contains a very broad definition of AI, Bryson believes it isn’t broad enough. She explains, “This may already be too narrow a definition of AI, given what the AIA is primarily about — ensuring that decisions taken by or with machines are done so well, transparently, and with clear human accountability, at least if those decisions matter.” Even more concerning for her is the fact that “about half of the EU member states are pushing back against this broad definition.” They want an even narrower definition to be used. If oversight of the development and implementation of AI is the desired goal of the AIA, she believes the broader the definition the better. “The call to restrict the definition of AI to only ‘complex’ machine learning or other reasoning ‘ordinarily understood’ to be intelligent is a problem,” she writes. “It produces not one but two ways people building or operating AI could avoid the kind of oversight the AIA was designed to provide, which every market needs for any potentially hazardous processes and products. The AIA is supposed to incentivize clarity and good governance, but a more complex definition of AI incentivizes either complexity or no governance. Either way potentially avoids oversight.”

She concludes, “If we choose the simple, broad definition of intelligence I’m advocating here [i.e., the conversion of information about the world into some action], then we motivate people to use the clearest, most explainable and maintainable version of AI they can, or even just ordinary software. That benefits everyone — corporations and developers just as much as citizens, residents, and activists. We can still write fiction and philosophy about fantastic versions of intelligence that converge or diverge from human intelligence in interesting ways. But for writing laws, let’s be broad and inclusive enough to help us keep our devices and systems safe for our societies.”

Benjamin Mueller (@Ben_CDI), senior policy analyst at the Center for Data Innovation, isn’t sure the AIA is such a good idea in the first place. He argues, “If adopted, the EU’s Artificial Intelligence Act will be the world’s most restrictive regulation of the development and use of artificial intelligence tools. It will not only limit AI development and use in Europe but impose significant costs on EU businesses and consumers. The AIA will cost the European economy €31 billion over the next five years and reduce AI investments by almost 20 percent.”[10] If that’s the case, one can readily see why defining AI is so critical to moving forward.