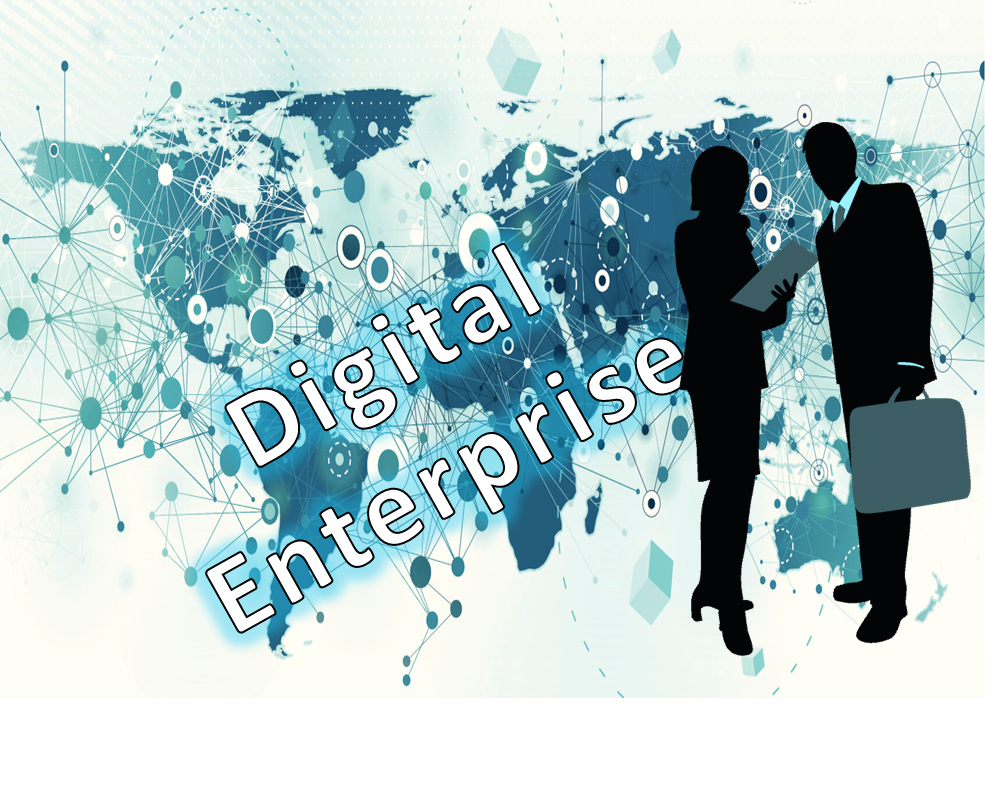 Data-driven Business and the Digital Enterprise

“Whether we like it or not,” Sohini Bagchi (@sohinidiva) asserts, “digital transformation is already underway.”[1] That’s both a bold statement and an ambiguous one. You might be asking: Exactly what is transforming in this Digital Age? The simple answer to that question is: Everything is transforming; which is why Bagchi made the statement deliberately broad and vague. As former IBM executive Irving Wladawsky-Berger observes, “Increasingly ubiquitous and commoditized, digital technologies are all around us.”[2] And Jessica Twentyman (@jtwentyman) adds, “Organizations have little choice but to overthrow their traditional business models as digital technologies sweep through their industry.”[3] Little wonder business leaders are being told that transforming their companies into digital enterprises is an imperative in the years ahead. The Information Age has been with us for decades. It reached maturity with the introduction of the World Wide Web in the mid-1990s and has been aging gracefully ever since. The Digital Age is the natural successor to the Information Age. Several emerging technologies are emerging to push us out of one age and into the other.

The first technology is the Internet of Things, which is normally described as a machine-to-machine (M2M) network whereas the Internet (i.e., the World Wide Web) is primarily a human-to-human (H2H) network. Cisco believes the two networks will merge so completely in the emerging Digital Age that an Internet of Everything (IoE) will be created. For more on that topic, read my article entitled “Always On: The Internet of Everything.” Maribel Lopez, founder of Lopez Research, bluntly states, “[The] IoT is at the heart of digital transformation. It promises to be the biggest revolution since the Internet because these connected devices will provide data that companies and consumers couldn’t easily access in the past.”[4] Ajit Kumbhare, Founder and CEO of FreshGravity, told Bagchi, “[The] IoT is emerging as the third wave in the development of the Internet. The 1990s’ fixed Internet wave connected 1 billion users while the 2000s’ mobile wave connected another 2 billion. The IoT has the potential to connect 10X as many (28 billion) ‘things’ to the Internet by 2020. By connecting to the Internet billions of everyday devices — ranging from wearables, industrial equipment, cars, cities etc. — the IoT merges the physical and online worlds, opening up a host of new opportunities and challenges for companies, governments and consumers.”

The second technology pushing us into a new age is advanced analytics. That term has been associated with other terms — Big Data and Big Data Analytics. Because the IoT is going to generate so much data (exponentially more data than was created during the beginning of the Information Age), the term Big Data will simply fade into the past and you will simply be reading more about advanced analytics. Advanced analytics will play an important role in everything from discovering new drugs to making personalized offers to consumers. Kumbhare uses the latter case an example. He told Bagchi, “With advent of technologies like Big Data, predictive analytics and changing consumer behaviour from traditional channels like web and contact centre to more mobile, there is a need to transform customer experience from traditional approach to more modern ‘digital experience’. One of the areas that transforming rapidly is Marketing, where there is more emphasis given on ‘micro segmentation’ and ‘personalization’ using advanced [data science] techniques. … Context driven marketing has become very important.”

A third technology lying at the heart of advanced analytics is artificial intelligence (AI) and specifically a branch of AI called cognitive computing. Cognitive computing is required to make sense of the massive amounts of data that will be collected and analyzed. Cognitive computing will be used both for cognitive process automation and for insight generation. Cognitive computing will be at the heart of every digital enterprise. As Kumbhare told Bagchi, “Enterprise software is getting more advanced to do more ‘intelligent’ tasks than just being an information store. With technologies like Machine Learning and Natural Language Processing, there is more intelligence being built into enterprise software.” Because cognitive computing systems use Natural Language Processing, non-technical people are going to be able to communicate with these systems without the need for a technical middleman. Or as Patrick Nelson (@Patnet) put it, “Digitization is ‘flattening’ privilege.”[5] IDC forecasts, “By 2020, 40% of all business analytics software will incorporate prescriptive analytics built on cognitive computing functionality.”[6]

According to a report published by the McKinsey Global Institute, “Digital capabilities, adoption, and usage are evolving at a supercharged pace. While most users scramble just to keep up with the relentless rate of innovation, the sectors, companies, and individuals on the digital frontier continue to push the boundaries of technology use — and to capture disproportionate gains as a result.”[7] In other words, the faster a company transforms into a digital enterprise the greater the benefits will be. Nelson adds, “Whether it’s in 2016 or 2020 and beyond, the digitization of everything will eventually happen.” The question is: Why delay the inevitable? IDC predicts, “Data-driven organisations could achieve an extra US$65 billion in productivity benefits by 2020.”

Rodger Howell (@rodger_howell), PwC’s Strategy& principal specializing in strategy and operations, writes, “Today, it is critical that companies go beyond making adjustments and instead open themselves up to a complete re-imagination of their strategic and operational purpose, including objectively assessing competitive position and thoroughly realigning operations to the new normal.”[8] Because cognitive computers can integrate both structured and unstructured data, they can create a single version of “the truth” that breaks down information silos and helps businesses achieve corporate alignment. Howell adds, “Digital technology will become increasingly integral to companies across broad swaths of industry. The line between technology companies and technology-enabled companies competing within traditional industries has blurred, which will force organizations in every facet of the economy to realign their operations to compete in a digital world. … 2016 is sure to be a year of transformation, and we see significant opportunity for executives to position themselves for success through proactive renovation of the operational processes. This ongoing period of disruption, though on the face it may seem simply turbulent, can be seized as an opportunity to build stronger more profitable companies.” Wladawsky-Berger adds, “Digitization, like electricity a century ago, is a general-purpose technology that underpins a very large share of economic activity.” Companies that don’t transform into a digital enterprise risk missing out on a large share of that economic activity.