Home » Business » Corruption Around the World

Corruption Around the World

In numerous past posts that focused on development, I have stressed that progress can seldom be made when a country is weighed down by corruption. Corruption is perhaps the single most corrosive factor that keeps developing countries mired in poverty. Corruption also affects developed countries since it unproductively siphons off resources. Each year Transparency International publishes a Corruption Perceptions Index in which it ranks how well or how poorly countries are doing when it comes to eliminating corruption. If you click on the link provided, it will take you to an interactive map and a table that provide a full listing of 178 countries. A quick glance at the map (a static version is shown below), shows that most of the countries that my colleague Tom Barnett places in the “non-integrating gap” (or “Gap” countries) remain extremely corrupt. 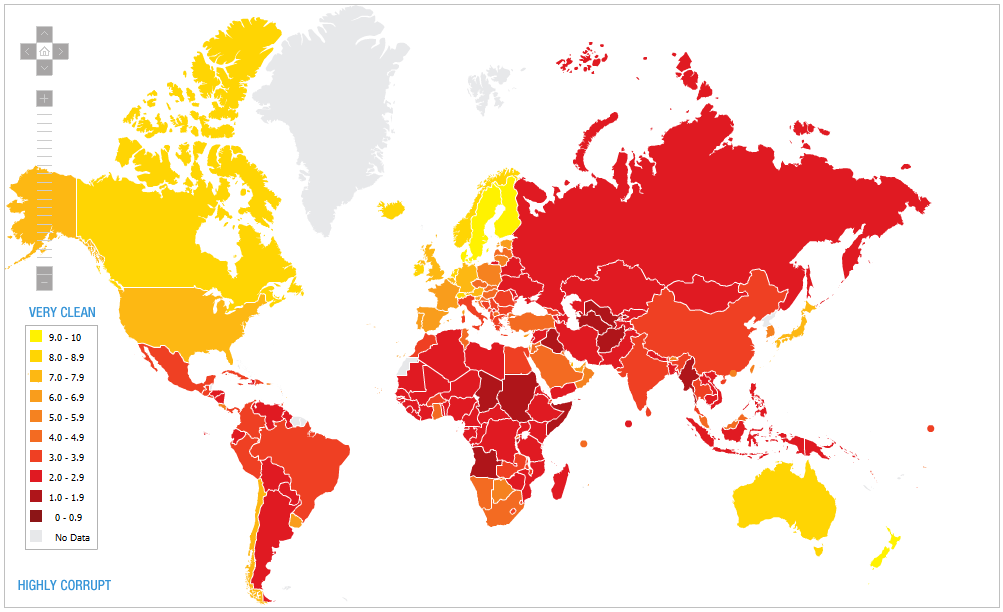 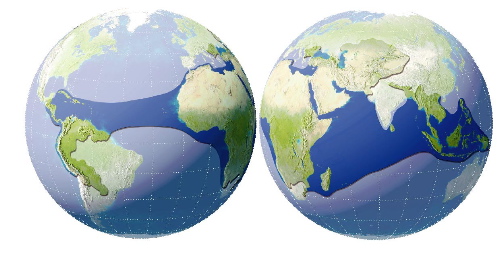 You might be wondering how Transparency International comes up with its rankings. The Report states:

“Transparency International (TI) defines corruption as the abuse of entrusted power for private gain. This definition encompasses corrupt practices in both the public and private sectors. The Corruption Perceptions Index (CPI) ranks countries according to perception of corruption in the public sector. The CPI is an aggregate indicator that combines different sources of information about corruption, making it possible to compare countries. The 2010 CPI draws on different assessments and business opinion surveys carried out by independent and reputable institutions. It captures information about the administrative and political aspects of corruption. Broadly speaking, the surveys and assessments used to compile the index include questions relating to bribery of public officials, kickbacks in public procurement, embezzlement of public funds, and questions that probe the strength and effectiveness of public sector anti-corruption efforts. For a country or territory to be included in the index a minimum of three of the sources that TI uses must assess that country. Thus inclusion in the index depends solely on the availability of information. Perceptions are used because corruption – whether frequency or amount – is to a great extent a hidden activity that is difficult to measure. Over time, perceptions have proved to be a reliable estimate of corruption. Measuring scandals, investigations or prosecutions, while offering ‘non-perception’ data, reflect less on the prevalence of corruption in a country and more on other factors, such as freedom of the press or the efficiency of the judicial system. TI considers it of critical importance to measure both corruption and integrity, and to do so in the public and private sectors at global, national and local levels. The CPI is therefore one of many TI measurement tools that serve the fight against corruption.”

Just because a country finds itself near the top of the Index doesn’t mean that it can let down its guard. Both the United States and the United Kingdom, for example, are moving in the wrong direction [“Corrupt Countries: Somalia Most Corrupt, US Slips in Rankings,” by Andrey Volkov, The Epoch Times, 27 October 2010]. Volkov reports:

“The United States … dropped from the 19th spot last year to 22nd out of 178 countries this year, with their index also falling by 0.4 points. The U.K., ranked 20th, posted an all-time low score of 7.6, a slight slip from last year’s 7.7, but a huge fall from their rating of 8.6 four years ago. … ‘These results signal that significantly greater efforts must go into strengthening governance across the globe,’ Huguette Labelle, chairwoman of Transparency International said in a statement. ‘With the livelihoods of so many at stake, governments’ commitments to anti-corruption, transparency and accountability must speak through their actions,’ she added.”

Among the various international rankings that have a bearing on economic development, TI’s Corruption Perceptions Index and the World Bank’s Doing Business Index are perhaps the most influential. Although there has been noted progress in business reforms around the globe, the latest results concerning corruption show little progress is being made. As I wrote at the conclusion of another post on corruption:

“Corruption is a drain on the economy of every country in the world. Former Miss America and consumer advocate Bess Meyerson once said, ‘The accomplice to the crime of corruption is frequently our own indifference.’ British singer/songwriter Ray Davies wrote:

Money and Corruption
Are ruining the land.
Crooked politicians
Betray the working man,
Pocketing the profits
And treating us like sheep.
And we’re tired of hearing promises
That we know they’ll never keep.

“Although Davies’ lyrics are a modern lament, corrupt politicians have been around since governments were first formed. An Assyrian clay tablet written around 2800 B.C., contained the following inscription: ‘Our earth is degenerate in these latter days; bribery and corruption are common; children no longer obey their parents; and the end of the world is evidently approaching.’ The world might not be ending, but when it does, corruption will be one of the last things that die.”

Gap countries, of course, are not the only nations that have significant corruption problems. Many emerging market countries are also rife with corruption. I’ve already mentioned Russia. Other members of the so-call BRICI countries (Brazil, China, India and Indonesia) also have their problems. Brazil ranks 69th in the Index, tied with Cuba. China ranks 78th. India ranks 87th, tied with the likes of Albania, Liberia, and Jamaica. Indonesia is tied at 110, with a miserable Index score of 2.8.

Corruption in India is getting so bad that it now captures more headlines than the morass of bureaucratic red tape as a factor slowing India’s progress. Yesterday, for example, the Indian edition of the Financial Times published a story about corruption in India’s parliament [“India warned over parliamentary corruption,” by James Lamont, 21 November 2010]. Lamont reports:

“Leaders of India’s opposition parties have warned that deepening corruption among parliamentarians in the pay of big business poses a severe threat to the credibility of the world’s largest democracy.”

The best way to deal with corruption is to shine the bright light of public attention on it. That is exactly what Transparency International is trying to do.