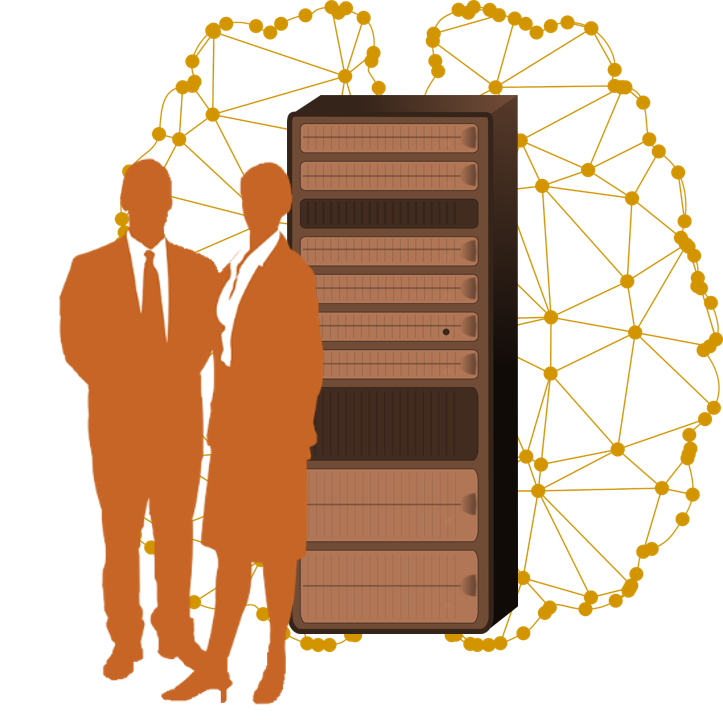 “Robotic process automation has been tipped as one of the most important strategic priorities for global business services,” writes the staff at Proactiveinvestors. “Robotic process automation is essentially advanced coded software harnessing complex computational mechanics to complete repetitive processes, such as sorting big data, processing payments and communicating with other digital systems to share data. The market for robotic automation is estimated to reach nearly $5bn globally by 2020.”[1] Here’s the kicker. “These programmes,” the staff writes, “replace the need for humans when performing repetitive rules-based tasks.” My question is this: How can something that replaces humans in the workforce be one of the most important priorities for global business services? There are plenty of pundits willing to draw you a picture of a bleak future in which machines (and software) displace millions of workers creating massive unemployment. There are plenty of historical examples that show massive unemployment results in hardship and social unrest and a bad business environment. Is that really the future we want? I think not. Does that mean companies shouldn’t pursue robotic process automation (RPA)? It does not. In fact, even some of the most employee-friendly companies will find themselves adopting robotic process automation.

Augmenting the Workforce with Process Automation

“We’ve all read those gloomy reports about AI causing mass unemployment,” writes Adam Devine (@Devineous), head of marketing for WorkFusion, “but they assume that AI will entirely replace people in the affected jobs and that AI will rapidly advance to allow a totally autonomous enterprise. False, all of it.”[2] Ankur Kothari (@ankur_786), Co-founder and Chief Revenue Officer at Automation Anywhere, agrees with that assessment. “There has never been a time when technology has entirely eliminated jobs,” he writes. “New technologies have created a need for different work skills required for new kinds of jobs. We have witnessed this in the past and this dynamic of innovation will continue in the future.”[3] Nevertheless, Kothari predicts, “With the advent of Robotic Process Automation (RPA), anything that can be automated will be automated.”

You might be wondering why — if everything than can be automated will be automated — people won’t be completely displaced in the workplace. Kothari’s answer, along with those who support his position, is, “The real promise of automation can only be realized when bots and humans work side-by-side.” MIT’s Erik Brynjolfsson (@erikbryn) insists, “Racing with the machine beats racing against the machine. Technology is not destiny. We shape our destiny.”[4] Kevin Kelly (@kevin2kelly), founding Executive Editor of Wired magazine, adds, “This is not a race against the machines. If we race against them, we lose. This is a race with the machines.”[5] The key to a better future rests in a strategy that embraces the idea that we are racing with smart machines. Devine explains:

“The truth is that AI can’t do the all of the work even when it comes to jobs that have high potential for automation. Most jobs still require some amount of human intelligence, and employers want to make the best use of it possible. Rather than pitting man against machine, the real challenge for business is integrating ‘software robots’ into the workplace to eliminate the mind-numbing tasks that erode productivity and prevent people from doing more valuable work. In this sense, rather than stealing jobs, AI gives every worker in the world a virtual assistant.”

The good news is that job augmentation is gaining traction in the business world. Stephanie Overby (@stephanieoverby), reports, “A new study suggests that business and IT automation is taking over tasks, not jobs.”[6] She continues:

“The implementation of robotic process automation is enabling enterprises to execute business processes 5-10 times faster with an average of 37 percent fewer resources, according to a report released … by Information Services Group (ISG). However, the productivity gains are not necessarily leading to mass layoffs, but rather the redeployment of employees to handle higher-value tasks and a greater volume of work, according to ISG.”

Kothari adds, “In a January 2017 report by management consultant McKinsey, they found that less than 5% of jobs can be completely replaced by technology.”

Technology has always been used to eliminate hard, menial, and repetitive tasks. As Kothari notes, that trend is going to continue. Another trend that comes into play is the emergence of cognitive computing. Vinodh Swaminathan, KPMG’s Managing Director of Innovation and Enterprise Solutions, explains, “The cognitive systems era, which is the most exciting phase of enterprise transformation in more than a century, is upon us. Cognitive software mimics human activities such as perceiving, inferring, gathering evidence, hypothesizing, and reasoning. And when combined with advanced automation, these systems can be trained to execute judgment-intensive tasks.”[7] As a result of these capabilities, companies should be thinking in terms of Cognitive Process Automation™ (CPA) rather than Robotic Process Automation. Cognitive Process Automation can go beyond accomplishing routine tasks and can actually help improve processes. CPA is powered by cognitive computing, like the Enterra Enterprise Cognitive System™ (ECS) — a system that can Sense, Think, Act, and Learn®. Cognitive computing combines artificial intelligence, advanced mathematics, and natural language processing. It can be applied to an almost unlimited number of business use cases, including process automation.

Craig Nelson, a partner at ISG, told Overby, “Understanding the broader digital transformational journey and thinking about the human interactions that are required when an enterprise begins to engage its customer digitally puts RPA and job disposition considerations in a different light. The opportunity for job creation in this space is yet to be fully understood, but it is certain to create new roles and new jobs that we have not yet envisioned.” At the very least, RPA and CPA will change job descriptions as humans learn to work with their smart machine co-workers. Hayley Lange (@HayleyLange), Head of Marketing at Genfour, offers seven reasons we should love “robotic process automation, cognitive technologies, and desktop automation.” They are:

1. While robots are taking care of the administration, you can take care of your customers. “Leaving the admin tasks to the robots means that humans are free to do what they do best — engage with other humans.”

2. They provide a new insight into the potential of your business. “Employing the help of robots will provide a consistent and plentiful data source, from which you can identify new opportunities and operational efficiency improvements for your business.”

3. They’re super accurate. “Robots have no capacity for human error.”

4. They tackle the tedious tasks, so you don’t have to. “RPA can be developed to fulfill a number of back office functions that are often tedious and repetitive, so that human employees can better deploy their skills elsewhere.”

6. They’re fast and efficient. “Robots can complete tasks in a much shorter time than their human counterparts, increasing the productivity of your business.”

7. They help you get ahead of the competition. “RPA enables new processes to be built quickly, without altering your backend systems, so you gain competitive advantage and retain your customers.”

According to the Proactiveinvestors’ staff, David Moss, a software robot developer at Blue Prism (the company claiming to have invented the term Robotic Process Automation), delivered a TED talk in which he presented “a far less depressing vision of a world populated by virtual robots.” They report:

“In a TED talk to University College London, he asked attendees to consider what are the skills and talents we could use people for and what can we use robots for? Instead of taking the human out of the workplace, robotic automation would take the robot out of the human. Currently, human potential is wasted, he argued. ‘We think we are using people for their skills, but we aren’t,’ he said. By allocating repetitive mundane tasks to robots, human workers would be free to utilize the skills and talents they were employed for. The benefits of freeing the potential of a human workforce are yet to be realized. … Instead of taking our jobs, robotic processing automation could revolutionize not only the way we work, but the jobs themselves.”

I like Nelson’s optimism and vision. We have the tools to create a future in which humans and machines work together to generate wealth and gainfully employ people. Forced idleness (i.e., increased redundancies) is not an outcome business leaders should desire or pursue.