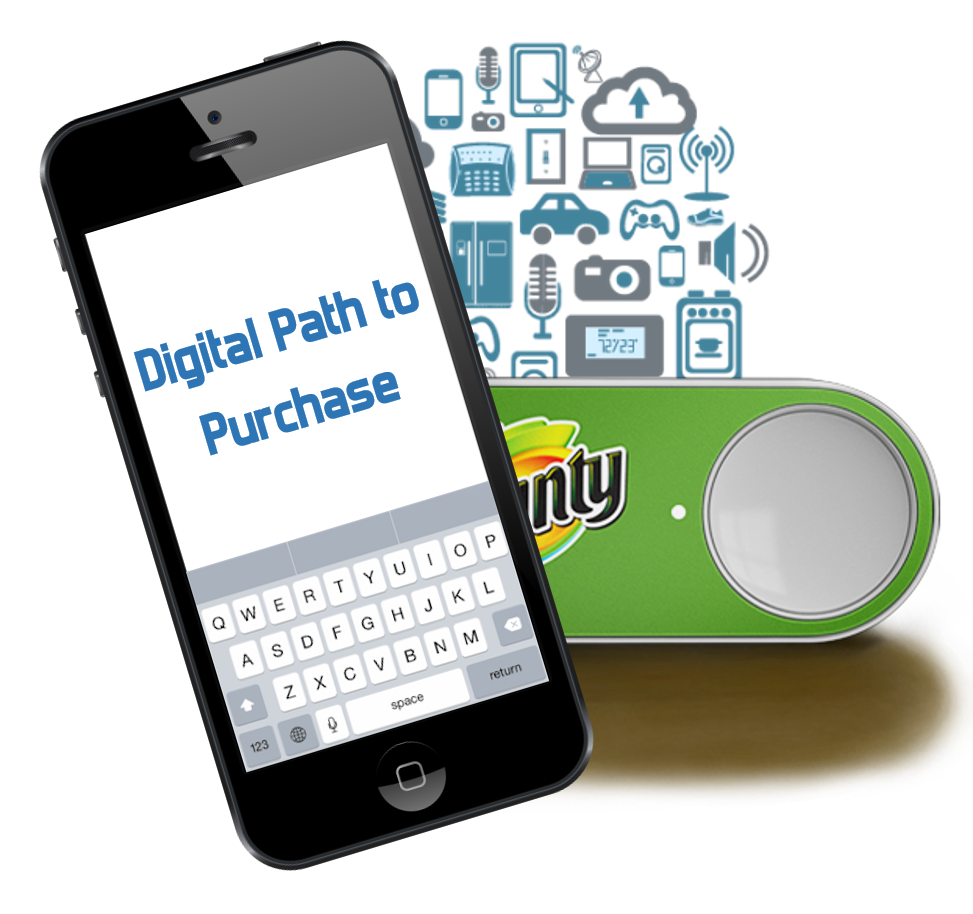 Buttons and Keyboards on the Digital Path to Purchase

The two most important characteristics of the digital path to purchase are convenience and information. Although the consumer digital journey began with desktop PCs and the World Wide Web, today mobile technologies and the Internet of Things (IoT) are rapidly becoming a significant part of the picture. Last year it was reported, “For the first time ever, smartphones are delivering the majority of mobile transactions in every major global market, according to new research. The study, from Criteo, indicates that apps drive a larger percentage of shoppers down the purchase funnel and convert at three times the rate of mobile web.”[1]

Criteo analysts assert, “The number of shoppers going online, be that via desk top or mobile, to both browse and purchase products continues to grow with a higher rate of transactions captured on mobile devices than via traditional purchase paths. Retailers who have optimized their mobile shopping experience accordingly — both in-app and on mobile web — are pulling away from their competitors and continue to see strong traction from consumers.” The smartphone is becoming an indispensable tool in the consumer’s shopping kit. Whether shopping online or in a traditional store, the smartphone is becoming a touchstone on the path to purchase. As Criteo analysts observe, “The smartphone continues to expand its prominence as the go-to shopping device, especially as features like fingerprint recognition make transactions effortless, while tablet purchasing steadily declines. As more retailers design mobile-friendly sites, mobile transactions are steadily increasing. All retailers should ensure they have a mobile-centric marketing strategy that embraces in-app and mobile web to meet their smartphone-focused audiences.”

Hailey Lynne McKeefry (@HaileyMcK) bluntly states, “For online retailers, a good mobile experience for customers may be the make or break factor in business survival. Mobile commerce (m-commerce) is quickly becoming a driving force in online commerce. In fact, U.S. retail m-commerce sales are expected to reach $123.13 billion in 2016, a 39.1% increase over 2015 and more than double 2014, according to eMarketer. This year, m-commerce will account for just under one-third of retail ecommerce sales and 2.6% of total retail this year, the research company estimated.”[2]

The Internet of Things: Connecting Consumers to Products

Voice activated personal digital assistants (PDA) like Siri and Alexa are opening new possibilities for IoT-connected eCommerce. They are an advance on IoT “buttons” (called Dash) introduced by Amazon in 2015. Sandy Skrovan explains, “Dash is essentially an adhesive button that connects to the Internet. Once it is pressed, an order is automatically sent to Amazon. Since its unveiling in early 2015, more than 200 different vendors and products have joined the program, making automatic ordering of everyday household items easy and accessible. Equally as intriguing is the IoT component taking shape around Dash. A host of device manufacturers, including the likes of Whirlpool, PUR and Honeywell, are developing Dash-enabled appliances and other gadgets that track product usage and automatically order more when supplies run low.”[3]

Hellen Oti-Yeboah (@hellenoti) reports, “Gartner predicts that by 2018, retailers engaged IoT partnerships with major manufacturers will gain a significant market share from competitors, it’s still unclear if IoT order buttons will cause a direct increase in demand at the initial stages. … While IoT buttons are predicted to create a better customer experience, easier access to order history which could affect demand and forecasting decisions, the adaptability of IoT buttons both on the customer and manufacturing side is in the infant stages. Hence, data visibility and change that should be anticipated might not be evident until a few years down the line when adoption becomes more wide stream.”[4]

Since convenience is one the main reasons consumers use the digital path to purchase, voice activated ordering, via something like Amazon’s Echo, is more likely to beat out buttons in the long run. Primarily because having a bunch of buttons scattered around one’s house isn’t as convenient as simply asking a PDA to order an item or put that item on a shopping list.

There are a number of “generations” still in play in the marketplace — from Baby Boomers to Gen Zers. Perhaps the most sought after generation, however, is Generation Y (aka millennials). Jeff Bounds (@DbjJeff) observes, “Omnichannel matters with this group, as millennials expect consistency across channels. Mobile apps can draw young people into stores and improve the experience they have while they’re there.”[5] Bounds adds, “Additionally, millennials value immediacy. When they see something online, they want to buy when they want to buy — as in, immediately.” According to Emma Sopadjieva (@Sopasita), a research and analytics manager at Medallia, Utpal M. Dholakia (@ud), George R. Brown Professor of Marketing at Rice University’s Jesse H. Jones Graduate School of Business, and Beth Benjamin, senior director of research at Medallia, “Traditional retailers are feeling the heat. Online retail, on the other hand, is thriving. Retail sales through digital channels (including mobile sales) increased by a massive 23% in 2015. Much of these gains have gone to online retailers.”[6] Larry Lewis, a product marketing manager at Kewill, writes, “Behind all of these changes is the consumer-driven market, where retailers must cater to shopper expectations more than ever. This demand directly impacts the full supply chain by introducing complexities for retailers who must stay on top of every touch-point — from those that trickle down to shoppers to the ones that work up to suppliers. The best way for retailers to take charge of an industry driven by the insatiable expectations of shoppers is to gain accurate visibility into the supply chain.”[7]

The penetration of smartphone technology around the globe has made a huge impact on how consumers buy products. The emergence of the Internet of Things and voice activated devices connected to the IoT could have a similarly large impact. IoT-connected buttons and IoT-connected appliances will also remain a part of the retail landscape, but probably won’t have the same kind of impact due to price and/or convenience.