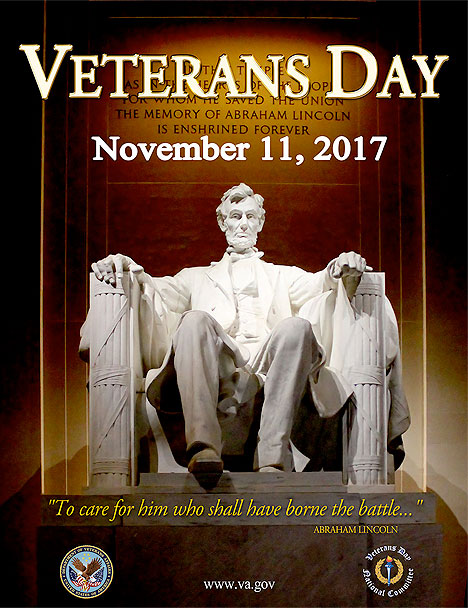 Although tomorrow is officially America’s Veterans Day, many people will enjoy a day off today since the holiday falls on a weekend. Originally called “Armistice Day,” the date was chosen to commemorate the signing of the armistice with Germany marking the end of hostilities during World War I. Historians at History.com note, “In 1918, on the 11th hour of the 11th day of the 11th month, an armistice, or temporary cessation of hostilities, was declared between the Allied nations and Germany in World War I, then known as ‘the Great War.’ Commemorated in many countries as Armistice Day the following year, November 11th became a federal holiday in the United States in 1938. In the aftermath of World War II and the Korean War, Armistice Day became legally known as Veterans Day.”[1] Military.com explains, “In 1954, after having been through both World War II and the Korean War, the 83rd U.S. Congress — at the urging of the veterans service organizations — amended the Act of 1938 by striking out the word ‘Armistice’ and inserting the word ‘Veterans.’ With the approval of this legislation on June 1, 1954, Nov. 11 became a day to honor American veterans of all wars.”[2]

Military.com notes many people fail to recognize the difference between Veterans Day and Memorial Day. The site explains, “Memorial Day honors service members who died in service to their country or as a result of injuries incurred during battle. Deceased veterans are also remembered on Veterans Day but the day is set aside to thank and honor living veterans who served honorably in the military — in wartime or peacetime.” We are living in a particularly difficult period for veterans (both those now serving and those recently released from service). The United States has been involved in almost constant combat for nearly 16 years. Many service members have served multiple tours in the Middle East and there is no end in sight. America’s armed forces consist of volunteers and, as Marguerite Guzman Bouvard observed back in 2012, they are “carrying the burden and experiencing the dreadful consequences of two long wars, the longest in American history. … Because these wars are fought by a volunteer army, few Americans have any personal stake in them or even know about what is happening in Iraq or in Afghanistan. … Returning soldiers should be honored and respected for their sacrifices. Learning about the hidden wounds they carry home with them is a matter of human rights, not only because their suffering is unseen but also because so many of them receive neither adequate mental healthcare nor the support they need to regain social trust and to become reintegrated into society.”[3] Half-a-decade can now be added to the length of conflicts in Afghanistan and Iraq.

Not all volunteers make the military a career. Veterans returning to civilian life desire nothing more than to find a job and return to normalcy. Alex Horton (@AlexHortonTX), a former infantryman in Iraq, suggests there are better ways of honoring our veterans than an a holiday or halftime tributes at football games.[4] He explains:

“For many civilians, veterans are thought about in the span of football halftime shows, where we gawk at troops standing on the sidelines while the camera lingers on flags flapping in the wind. The word hero is tossed around and abused to the point of banality. The good intentions of civilians are rarely in question, but detached admiration has always been a stand-in for the impulse to do ‘something’ for veterans. So civilians clap at football games. They applaud returning troops in airports in outward appreciation, satisfied with their magnanimous deeds. Then — for many of them — it’s back to more tangible concerns, like the fragile economy. A veteran’s résumé might come across your desk, but if you’re like more than half of these surveyed hiring managers, you harbor suspicion and fear about post-traumatic stress episodes in the workplace. That’s the problem with viewing something on a pedestal: you can only see one side at a time, and rarely at depth. It produces extremes — the valiant hero or the downtrodden, unstable veteran. Thank you for your service. But we’re looking for someone else.”

Horton asserts what veterans really need are “opportunities … to flourish after their service.” He adds, “There is a trio of veterans organizations dedicated to exactly that. The Mission Continues and Team Rubicon focus on rebuilding community and regaining the sense of mission that dissipated after service. The Pat Tillman Foundation provides continued education for veterans who show potential to lead across all sectors. All three groups have recognized the work isn’t over for veterans of Iraq and Afghanistan, and what we’ve carried so far is of great use to the country. But follow them closely and you’ll find their members match determination with humility. There is much to do, and, much to learn. If you want to contribute something toward veterans in a tangible way without the condescension of giving us baseball tickets and parades, these organizations are a great place to start.”

Another group, the families of veterans, rarely gets the notice it deserves or the thanks and recognition it has earned. Often you’ll see someone thank a veteran for his or her service while they are standing with their family members. The person showing gratitude rarely thinks of the sacrifices families have to make so that military personnel can serve. While they might not face the terrors of war, they nevertheless sacrifice much to support our service members. Next time you thank a veteran for his or her service in the presence of their family, take the time to thank the family as well. It will mean a lot to both the veteran and the family. American men and woman continue to fight and die around the world for our freedoms. Please join us at Enterra Solutions® in honoring them — along with all veterans and their families — on this Veterans Day.