Last March the Information Technology and Innovation Foundation released a report that indicated significant gains in productivity could be achieved by proper investment in computer technology [“Study Says Computers Give Big Boosts to Productivity,” by Steve Lohr, New York Times, 13 March 2007]. I obviously didn’t need a study to convince me of the value added by computer technologies. Enterra Solutions was founded on that belief; specifically, the belief that computer technology could be used to break down the silos between security, compliance, and performance optimization challenges and blend them holistically into a new business platform using automated rule sets to drive business processes. Lohr reports:

“Money spent on computing technology delivers gains in worker productivity that are three to five times those of other investments, according to a study being published today. But the study also concluded that the information technology industry itself was unlikely to be a big source of new jobs.”

Lohr was quick to point out that the the Information Technology and Innovation Foundation is supported by corporations that could benefit if others invest heavily in information technology, including IBM, Cisco, eBay, and the Communications Workers of America. The report, however, asserts that the real benefits accrue to users of such technology more than manufacturers of such technology.

“The study concludes that the economic significance of information technology is less in the technology itself than in the capacity of computer hardware, software and services to transform other sectors of the economy. Policy, according to the study, should focus less on incentives to use certain technology products or help particular companies than on encouraging market forces to hasten the pace of technology-aided change in industries.”

I written a number of posts concerning my belief that industries are going to have to transform to survive in the emerging information age business environment. That is basically the message of this report. Although Enterra Solutions® focuses on vertical industries when marketing its products, the future belongs to technologies that can bridge markets. Some of the work Enterra Solutions is contemplating in Kurdistan and elsewhere is aimed at achieving this goal. The immediate future, Lohr reports, benefits from quick adoption of information technologies in vertical industries.

“In an interview, Robert D. Atkinson, the foundation president, cited health care, electric utilities and transportation as sectors that computing technology could benefit. In health care, for example, the federal government has prodded industry to set standards for sharing patient and treatment information, as a step toward building a national health information network. Medicare and industry groups are moving to require hospitals and clinics to measure and report their performance in meeting safety standards and in patient health goals. To meet those standards, health care providers must increasingly adopt modern computing tools.”

I found it interesting that these are some of the same areas on which Enterra Solutions has focused. We are furthest along in the transportation area, especially the portion that deals with port and harbor security. Although I’m a big believer in standards (since they generate trust as well as efficiency), Enterra Solutions has developed technologies that permit the integration of information from disparate sources when such data bases are connected to a service oriented architecture.

Often the value added of adopting information technologies lies in the fact that it reduces manpower requirements, the report, however, concentrates on remarkable increases in individual productivity. It is also the part of the report that generated the most skepticism. Lohr reports:

“The most provocative and controversial parts of the report, ‘Digital Prosperity: Understanding the Economic Benefits of the Information Technology Revolution,’ are its claim of extraordinary productivity gains from investments in computing technology and its policy focus on industry sectors. The report cites studies to back its assertion of outsize productivity benefits, but many economists are not convinced. ‘It could be that investments here pay off more than other investments, but the evidence is still not in, in my view,’ said Robert E. Litan, an economist and director of research and policy at the Ewing Marion Kauffman Foundation.”

Another interesting part of the report is its assertion that industries that adopt information technologies will create more jobs and spur new sectors in the future.

“The report contends, job gains will more and more come from industries that use information technology intelligently, just as in the 19th century employment in the railroad industry leveled off but development of a transportation network led to the rise of national retailers and other new industries. The services sector, which employs 80 percent of the American work force, is expected to generate most of the new jobs in the future.”

If true, it says a lot about how the U.S. economy is going to have to change so that the work force of the future is properly educated and trained to fill those jobs. There is going to be a lot written and spoken about jobs, the economy, immigration, education, and so forth leading up to the 2008 election cycle. It would be unexpected, but grand, if the candidates running would provide positive visions of the way forward instead of negative rhetoric about how bad things currently are. 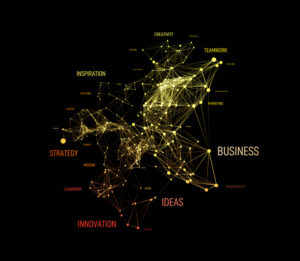