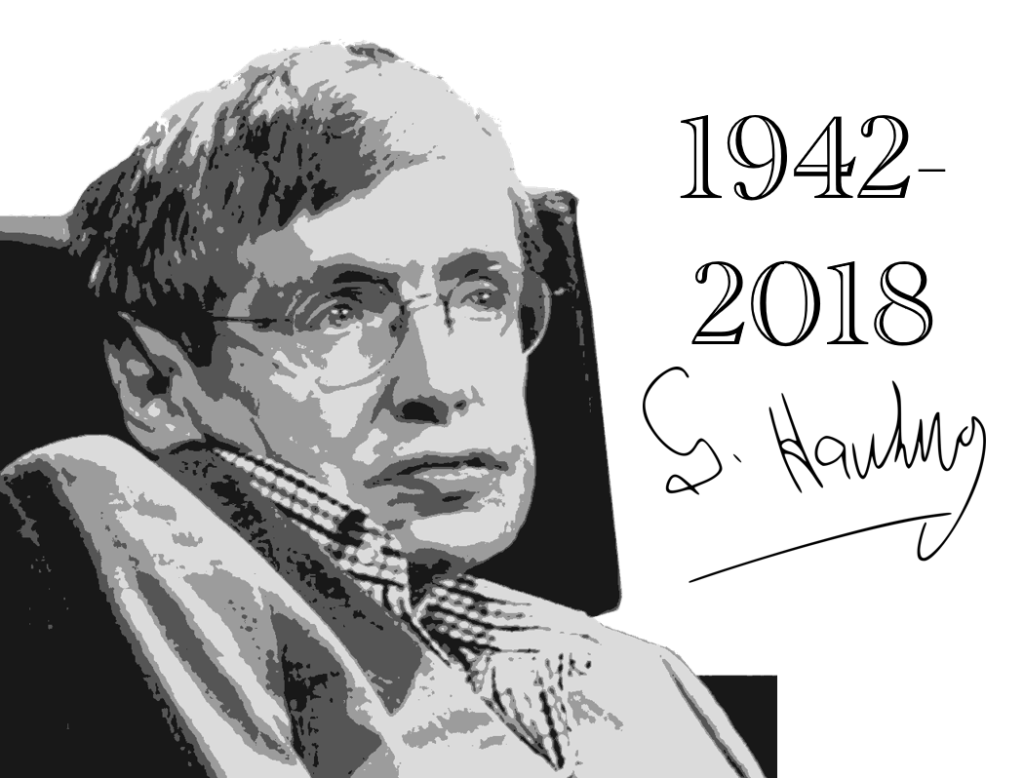 Few scientists achieve the kind of fame attained by Professor Stephen Hawking of Cambridge University. His notoriety came as much from his courage as his brilliance. At the age of 21, Dr. Hawking was diagnosed with amyotrophic lateral sclerosis (more commonly known as Lou Gehrig’s disease). It’s a disease that damages nerves causing those suffering from it to lose control of movement and eventually results in paralysis. Typically, patients die within five years of being diagnosed. That Professor Hawking lived to the age of 76, the longest known survivor of ALS, is something of a miracle. Upon learning of Professor Hawking’s death, Neil deGrasse Tyson (@neiltyson) tweeted, “His passing has left an intellectual vacuum in his wake. Think of it as a kind of vacuum energy permeating the fabric of spacetime that defies measure.”

Dennis Overbye (@overbye) reports much of Dr. Hawking’s popularity came “through his book ‘A Brief History of Time: From the Big Bang to Black Holes,’ published in 1988. It has sold more than 10 million copies and inspired a documentary film by Errol Morris. The 2014 film about his life, ‘The Theory of Everything,’ was nominated for several Academy Awards and Eddie Redmayne, who played Dr. Hawking, won the Oscar for best actor.”[1] Michio Kaku, a professor of theoretical physics at the City University of New York, told Overbye, “Not since Albert Einstein has a scientist so captured the public imagination and endeared himself to tens of millions of people around the world.” A brief story about Dr. Hawking’s life can be found on the CNN website. Through all the hoopla, Professor Hawking maintained a dignified humility. In 1990, he told the Los Angeles Times, “I fit the part of a disabled genius. At least, I’m disabled — even though I’m not a genius like Einstein. … The public wants heroes. They made Einstein a hero, and now they’re making me a hero, though with much less justification.”[2]

In spite of his physical limitations, Dr. Hawking’s mind and humor were always sharp. In an article honoring the good professor, Overbye wrote, “Dr. Hawking did not allow his physical limitations to hinder his quest to answer ‘the big question: Where did the universe come from?’ … Scientifically, Dr. Hawking will be best remembered for a discovery so strange that it might be expressed in the form of a Zen koan: When is a black hole not black? When it explodes.”[1] Joel Achenbach (@JoelAchenbach) and Boyce Rensberger add, “He spent much of his career searching for a way to reconcile Einstein’s theory of relativity with quantum physics and produce a ‘Theory of Everything’.” They go on to note, Dr. Hawking once stated, “My goal is simple. It is complete understanding of the universe, why it is as it is and why it exists at all.”

Like all discoverers, Dr. Hawking was great at asking questions. Good questions lead to good answers. Although he never achieved his goal of developing a theory of everything, he did leave his mark. Daniela Hernandez (@danielas_bot) recalls a few of his contributions to science:[3]

“During his long career, Dr. Hawking devised seminal theories that have shaped scientists’ and the public’s understanding of black holes and the beginning of the universe. … Among his most important scientific contributions are his singularity theorems, which help explain concepts like the beginning of time. … In recent years, he also partnered with Silicon Valley entrepreneurs on high-risk science initiatives. At a conference in April 2016 for one such project, Dr. Hawking said he wanted to be remembered for his work on Hawking radiation, a theory on how information might escape a black hole’s powerful grip. Hawking radiation-leaking black holes offer an explanation to the long-perplexing information paradox: If black holes eventually disappear and the laws of physics state that the universe’s amount of information is fixed, what happens to the information black holes contain? Dr. Hawking’s answer: It’s suspended at the event horizon, the border between space and a black hole’s void. Other experts agree it’s his most notable work, although Hawking radiation has never been directly observed.”

More recently, Dr. Hawking made headlines by expressing concern that artificial intelligence (AI) could someday destroy the world. He told participants at a technology conference in Lisbon, Portugal, “Computers can, in theory, emulate human intelligence, and exceed it. Success in creating effective AI, could be the biggest event in the history of our civilization. Or the worst. We just don’t know. So we cannot know if we will be infinitely helped by AI, or ignored by it and side-lined, or conceivably destroyed by it.”[4] The AI to which he refers is artificial general intelligence which could empower sentient machines. Whether such machines will ever be developed remains a point of debate. Over the last few years, Dr. Hawking has also lamented about what humans have to the Earth. “Our physical resources are being drained at an alarming rate,” he stated. “We have given our planet the disastrous gift of climate change. Rising temperatures, reduction of the polar ice caps, deforestation and decimation of animal species. We can be an ignorant, unthinking lot. We are running out of space and the only places to go to are other worlds. It is time to explore other solar systems. Spreading out may be the only thing that saves us from ourselves. I am convinced that humans need to leave Earth.”[5]

When President Barack Obama awarded Dr. Hawking the Medal of Freedom in 2009, he stated, “From his wheelchair, he’s led us on a journey to the farthest and strangest reaches of the cosmos. In so doing, he has stirred our imagination and shown us the power of the human spirit here on Earth.” Rest in Peace Dr. Hawking.