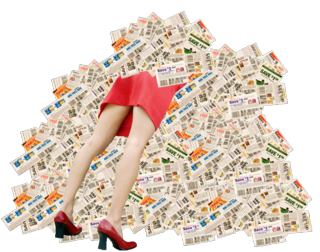 Anyone who has followed the travails of retailer J.C. Penny (JCP) knows that the tenure of former CEO Ron Johnson didn’t go well. In fact, some pundits called his leadership “disastrous.” Johnson obviously set out to make things better at JCP, not worse. His efforts involved a new strategy that eliminated sales and coupons in favor of everyday low prices. As we now know, it didn’t work. Johnson was replaced by Mike Ullman, and, even though Ullman’s strategy for putting JCP back on track “has yet to take shape, … at least one part of the new chief executive’s plan is clear: Coupons will be back.” [“Lessons From J.C. Penney: Don’t Mess With Coupons,” by Emma Rosenblum, Bloomberg BusinessWeek, 10 April 2013] Rosenblum points out that, on paper, Johnson’s strategy made sense. After all, she writes, “Coupons are unwieldy and have the whiff of downscale shopping, and discount programs are expensive for companies to maintain.” During a fourth-quarter conference call held before his ouster, Johnson stated, “We worked really hard and tried many things to help the customer understand that she could shop anytime on her terms. But we learned she prefers a sale. At times, she loves a coupon.”

Rosenblum points out that American have a “longstanding affection for those money-saving pieces of paper. For evidence, just look to TLC’s hit reality series, Extreme Couponing, which since 2010 has been showcasing the most dedicated (if slightly insane) couponers in America.” According to Progressive Grocer, “Ninety-five percent of Americans use coupons when shopping, while 73 percent admit to using coupons at least a couple times per month, according to a recent survey conducted by Boston, Mass.-based Linkable Networks.” [“Coupon Use Still Prevalent Among American Consumers,” 5 April 2013] If the show is a reflection of reality, it appears that extreme couponing is primarily a female passion. Jessica Grose, in a review of Extreme Couponing, noted that the show features “women (and very few men).” [“The All-Consuming Pleasures of ‘Extreme Couponing’,” Bloomberg BusinessWeek, 28 February 2013] Admittedly, most of the people featured in the show demonstrate abnormal buying behaviors. But coupons still hold attraction even for people with more normal shopping habits. Grose explains, “Couponing began in the U.S. — it was invented in 1887 by Asa Candler, a co-owner of Coca-Cola and still hasn’t caught on around the world.”

That statement may be true specifically for extreme couponing, but there have been successful coupon campaigns conducted outside of the U.S. For example, the London-based ad agency Proximity won an award for a campaign it conducted on behalf of Procter & Gamble called “Mums on Mission.” [“Three Brands That Used Data to Transform Their Media Strategies,” by Noreen O’Leary, Adweek, 25 March 2013] O’Leary describes the campaign:

“Realizing that mothers no longer swap tips on the school run, Proximity sought to replicate that community via Facebook. Working with Supersavvyme, a P&G Facebook community, the agency created a to-do list app via the social network that produced a solutions database. Thus, consumers became the media channel themselves, crowdsourcing searchable advice. Rewards came in the form of coupons, which, in the first two weeks, generated 33,000 redemptions for P&G products. Also during that time, 52,872 tips were shared while the average time spent on the site was 18 minutes. Fifty-one percent of visitors were repeat visitors.”

Grose says that one reason extreme couponing is localized to the U.S. is the fact that “only in the U.S. are houses big enough to store so much excess, and only here are we so obsessed with end times; more than one couponer semi-jokes that if the Rapture were to come, she’d be prepared with her eight-year supply of toilet paper.” To be fair, Grose notes that some of those involved in the extreme couponing craze “donate their largesse to charity.” The editorial staff at Progressive Grocer insists, “America is a country of deal seekers and technology enthusiasts, and it is no surprise these two are converging.” The article continues:

Tom Burgess, CEO of Linkable Networks, told the staff at Progressive Grocer, “Our society continues to be deal savvy. As we emerge from an unstable economy, I think we all learned the value of stretching the dollar as far as we can and one way to do that is to seek out coupons, promotions and deals. Our research shows that consumers are using multiple sources to simplify and streamline their shopping experience and save money along the way.” The article concluded with these additional survey findings:

With print editions of many newspapers struggling for survival, it’s clear that the future of coupons probably rests in technology. Paul Ritz writes, “Searching for coupons the old-fashioned way by combing through newspaper ads, supplements and local flyers can be kind of disheartening.” [“Are Coupons Really Worth All That Time And Effort,” National Debt Relief, 30 September 2012] The reason the “hunt and clip” method of couponing can be disheartening, he writes, is because “the best deals are at stores where you never shop or that they are for products you rarely [buy].” That’s why targeted marketing and coupons are a match made in heaven. Ritz insists that using “a search-and-find system on the Internet” can save a shopper both time and money. He writes:

“There are an amazing number of sites where you can get coupons. And many of them are electronic, meaning that there is no clipping and sorting. Some of the best sites for coupons are www.retailmenot.com, www.coupons.com, www.smartsource.com, and www.couponcabin.com. RetailmeNot is different in that it is a community where couponers report if a discount code did or did not work for them so that you can quickly filter out bad deals.”

Consumers worried that coupons are in the twilight of their existence should be cheered by the fact that some large media organizations are about to get into the digital coupon business. According to Christopher Heine, “Fox News, The Wall Street Journal and Shaw Media want to help advertisers convert their TV commercials into hyper-local mobile commerce opportunities.” [“Fox News and WSJ Look to Turn Video Ads Into Mobile Coupons,” AdWeek, 11 April 2013] Heine reports:

“The companies announced that they are working with mDialog to create ‘tap-through’ video ads aimed at smartphone users who are perusing these publishers’ digital properties. … The main concept behind mDialog’s service is relatively simple: it’s about helping brands deliver location-based coupons via mobile ads.”

With so many consumers now carrying smartphones, this strategy makes good sense. One of the reasons that consumers still love coupons is that they “saved $4.6 billion in 2011, $500 million more than the previous year.” [“Forever Frugal Mindset Leads to $4.6 Billion Coupon Savings in 2011,” Valassis, 26 January 2012] To help control the costs of discounting, manufacturers are reducing the time that coupons are valid and requiring multiple purchases to use a single coupon. Nevertheless, it looks like coupons will continue to have a bright (if digital) future.