A few years ago, an article in SupplyChainBrain asserted omnichannel sales are becoming so important they are transitioning the retail sector “to a ‘post-modern’ consumer-centric era triggered by the speed of technological advancements, globalization and hyper-competition, both online and offline.”[1] If you are like many people, you might be asking: “What the heck does that mean?” Basically, it means that the digital path to purchase has changed retailing forever and the customer is now king. Black Friday — the day after the Thanksgiving holiday is celebrated in America — is a good example of how the digital path to purchase has changed retailing forever. For decades, Black Friday was strictly an America phenomenon; however, David Midgley, Head of Operations at Total Processing, reports, “Black Friday was first introduced to the UK in 2010 thanks to Amazon.co.uk, since then the annual event has hit our local stores, supermarkets, shopping centres and computer screens with a plethora of discounts and shopping excitement.”[2]

According to BlackFriday.com, “The term ‘Black Friday’ was coined in the 1960s to mark the kickoff to the Christmas shopping season. ‘Black’ refers to stores moving from the ‘red’ to the ‘black,’ back when accounting records were kept by hand, and red ink indicated a loss, and black a profit. Ever since the start of the modern Macy’s Thanksgiving Day Parade in 1924, the Friday after Thanksgiving has been known as the unofficial start to a bustling holiday shopping season.” Maxwell Strachan (@maxwellstrachan) offers a totally different explanation for the origin of Black Friday. He writes, “It’s totally understandable if you think the term ‘Black Friday’ is a direct linguistic descendant of ‘in the black,’ accounting jargon for turning a profit. After all, the day after Thanksgiving is now one of the biggest shopping days of the year, an annual delight to retailers hoping to give their bottom lines a nice little boost in the year’s final weeks. But the truth is that Black Friday owes its name to the Philadelphia Police Department, which did not have profitability in mind.”[3] He explains:

Regardless of which story of origin you believe, the fact remains Black Friday has historically been a day widely anticipated by brick-and-mortar stores. When Internet shopping began to take off, online retailers wanted a day of their own and “Cyber Monday” was created. Because so many retailers begin offering heavy discounts (which they call Black Friday Deals) long before Thanksgiving, Black Friday and Cyber Monday aren’t as important as they once were. Nevertheless, the term Black Friday will likely remain in our collective lexicon as a keyword associated with holiday sales. Midgley provided the following infographic showing a Black Friday timeline. 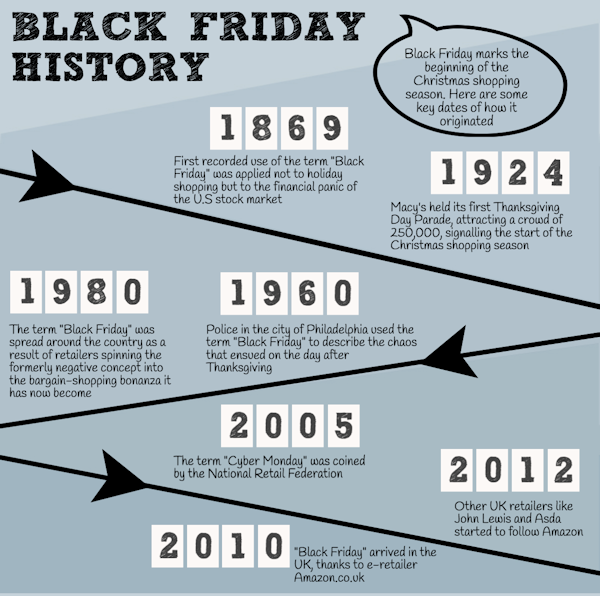 The global impact of Black Friday and Cyber Monday shouldn’t be underestimated. The Chinese equivalent of Amazon, Alibaba, took notice and looked for a Chinese celebration it could tie to holiday sales. Nine years ago, it settled on Singles’ Day. According to Wikipedia, “Singles’ Day is an entertaining festival widespread among young Chinese people, to celebrate the fact that they are proud of being single. The date, November 11th (11/11), is chosen because the number ‘1’ resembles an individual that is alone.” Michael Zakkour (@michaelzakkour), Vice President, China/Asia Pacific Practice, at Tompkins International, reports, “What used to be known as ‘Singles Day’ in China has been redefined and rebranded as ‘The 11/11 Global Shopping Festival’ by the holiday’s e-commerce patron saint, Alibaba, and with good reason. This year’s 11/11 is going glam, global and digital.”[4] Did Alibaba’s strategy work? Frank Lavin (@HelloFrankLavin), Founder and CEO of Export Now, reports, “What was already the world’s largest 24-hour online sale became even bigger. This year, Singles’ Day rang up an eye-popping $17.8 billion in sales, up from $14.3 billion last year.”[5] He continues:

“To put this in perspective, online sales in just one day in China is more than Brazil’s total projected e-commerce sales for all of 2016. In fact, if Singles’ Day were a country and we ranked sales of that one day against annual e-commerce sales of countries around the world, Alibaba’s Singles’ Day would rank as the 11th largest country in the world, just ahead of Brazil and just behind South Korea, according to statistics from market-research firm eMarketer.”

The late British cleric Charles Caleb Colton, once wrote, “Imitation is the sincerest form of flattery.” American marketers should be flattered their combination of Black Friday/Cyber Monday spawned the 11/11 Global Shopping Festival (aka Singles’ Day) — which could become an even bigger global phenomenon. If the 11/11 Global Shopping Festival continues to grow, we will have clearly entered “a ‘post-modern’ consumer-centric era triggered by the speed of technological advancements, globalization and hyper-competition, both online and offline.”