Back in March 2012, Alex Cocotas reported that a new study from Nielsen, estimated that “just under half of American mobile subscribers (49.7 percent) are smartphone users.” [“U.S. Smartphone Penetration Hits 50 Percent,” Business Insider, 8 March 2012] That is a significant one-year jump. Cocotas reports that a “year ago, smartphone penetration stood at 36 percent.” Raven Lovecraft notes that the 50 percent figure represents over 100 million smartphone users. [“US smartphone penetration reaches 100 million,” TG Daily, 8 March 2012] Lovecraft reports, “There are enough smartphones in the US to account for nearly one in every three Americans.” That’s a significant number of people and those individuals have smartphones because they want to do more than talk and text their friends. At least that is what numerous companies hope is the case.

“The tags can be put to many uses—inventory tracking, event ticketing—but no one has embraced them more visibly than advertisers. They pop up at stores, on posters, and in magazines to deliver coupons or direct shoppers to websites with more product details.”

To use QR codes, users must download applications on their smartphones that allow them to scan QR codes and be redirected to appropriate web sites. Milian reports, however, that, more often than not, users are saying that they find little useful or interesting information at those sites once they get there. He continues:

“QR codes convey ‘the appearance of being tech savvy,” says Thaddeus Kromelis, a strategist at WPP’s Blue State Digital, which has done work for Barack Obama’s presidential campaigns. Over the last couple of years they’ve become much more common; in December 2011 they appeared in 8.4 percent of all magazine ads, up from 3.6 percent at the start of the year, according to marketing firm Nellymoser.”

Milian reports, however, that the QR code “ad trend may be reversing as more consumers … realize QR codes aren’t always worth the effort it takes to whip out a phone.” To back up this claim, Milian notes that data from Forrester Research shows “only 5 percent of Americans scanned a QR code between May and July of last year, the latest data available.” Patti Freeman Evans, the Forrester analyst who edited the report, told Milian, “Advertisers are looking at every way possible that they can connect with consumers.” Nothing new about that. But Evans went on to say, “Consumers aren’t saying, ‘Oh, I really want to be able to connect with companies and brands.”‘ Chia Chen, a senior vice president at the Publicis Group’s Boston-based Digitas, agrees with Evans and he told Milian that this realization has tempered advertisers’ initial enthusiasm for QR Codes. Milian indicates that the QR code was probably never going to be a great advertising tool. He explains:

“QR codes have always had limitations as advertising tools. They can only be used by smartphone owners, who have to download an app and hold their phone steady to capture a clear image. The process doesn’t work well with faraway billboards or in low lighting, and it requires cellular service. For some reason, advertisers have put them on posters found in subways and in United Continental’s Hemispheres In-Flight Magazine, places where travelers usually don’t have reception. Such examples have made QR codes the butt of jokes. A blog called WTF QR Code contains photos of poorly placed codes that no one could reasonably be expected to scan, such as on a billboard along the highway or inside a liquor bottle. Another blog called Pictures of People Scanning QR Codes has garnered hundreds of fans. The site contains no posts.”

To be fair, Milian points out that the inventors of the QR code, a Tokyo-based team at Denso Wave, a subsidiary of Toyota Group, never intended the code to be used as an advertising tool. He explains:

“The company created the square codes to improve inventory tracking for auto parts, says Koji Fujiyoshi, an executive there. Denso Wave patented its creation and published the specification online, allowing anyone to use QR codes for free.”

It was the free use of QR Codes that prompted advertising agencies to experiment with the technology. Milian reports that “some organizations have found creative uses for the technology” beyond inventory control or advertising. He continues:

“A wildlife refuge in Sanibel, Fla., has QR codes situated along its trails to give visitors more information about the animals they see, according to Toni Westland, a ranger there. Rock the Vote is putting codes on T-shirts the organization is giving away at concerts this summer. Scanning them leads to voter registration forms, says Heather Smith, the organization’s president.”

Milian asserts that advertisers “have been, well, less creative.” Does that mean that QR Codes are going to be relegated to the dust bin of history. According to Milian, it doesn’t. He explains:

“Even without advertisers, the QR code might thrive. Online ticket site Fandango says about 13 percent of the movie theaters it works with have installed QR-code readers to scan tickets displayed on smartphones. That number is expected to reach 25 percent by the end of the year, says Jessica Yi, Fandango’s product chief. And smartphone ticketing will get a boost from Apple this fall when the next version of its iPhone operating system is released. The new software includes a feature called Passbook, a digital wallet to store boarding passes, coupons, movie tickets, and gift cards—many of which rely on QR codes. Passbook ‘will raise awareness’ for QR codes, Yi says. ‘That’s the great thing that Apple brings to the table.'”

QR codes will also continue to find a meaningful role in inventory management. Milian reports that “Denso Wave is working on what it calls ‘the next generation of QR codes,’ including versions that are smaller and can securely transmit encrypted data. One could even help crack down on counterfeit goods, Fujiyoshi says.” Milian’s bottom line: “QR codes are increasingly used for smartphone ticketing and other purposes, but they’ve been largely ineffective as advertising tools.” There are, however, two other bottom lines that need to be considered as advertisers look for technology outreach beyond QR codes. First, the number of smartphone users is only going to increase; and, second, organizations are going to continue to explore ways of reaching potential customers using that technology.

The latest proof of that was the announcement by IBM that it was testing an “augmented reality” application for consumers. [“IBM Tests ‘Augmented Reality’ Shopper App,” by Jack Neff, Advertising Age, 2 July 2012] Neff reports:

“Marketers have tried targeting consumers in stores with QR codes and barcode scanners that so far have gotten limited traction. Now IBM is testing a new approach, dubbed augmented reality, which is a bit like applying search or a personalized version of Google Goggles to the world of physical store shelves. The prototype app, being tested with some yet-unnamed large retailers in the U.S., can be downloaded by shoppers in-store at the onset of a shopping trip or beforehand to their smartphones or tablets. It lets them describe what they’re looking for in terms of ingredients they want more of (e.g., whole grains) or less or none of (e.g., gluten or lactose). It also lets them input that they want biodegradable packaging or say what ingredients or products they want to assemble for a meal. ‘You specify the things you’re interested in, and then using your device and the video camera on the device, as you scan the product the app will recognize it and superimpose the information you’re looking for on the product itself,’ said John Kennedy, VP-corporate marketing for IBM. ‘Therefore, it brings more information to bear on the decision.’ The app, developed by IBM researchers in Haifa, Israel, ‘marries the wealth of information on the web so the shopping experience becomes more informative and personal to help them make better decisions,’ Mr. Kennedy said. ‘It opens questions about what can happen in the relationship between the retailer and shopper and ultimately the [brand] marketer.'”

Augmented reality is getting a lot more attention nowadays so it makes sense that this technology should be brought to shopping aisles. It’s also a way to help brick-and-mortar stores adapt to a world in which online shopping is making it more difficult for them to attract customers and make a profit. I believe that the IBM system is a good start but that a lot more can be done with this kind of technology. Reporting on the new IBM application, Darren Quick notes, “While the rise … of online shopping has eaten into the profit margins of bricks and mortar retailers over the past decade, the vast majority of consumers (92 percent according to Forrester Research) still do their shopping in-store.” [“IBM brings augmented reality to the shopping aisle,” Gizmag, 3 July 2012] Quick continues:

“With the Internet providing a wealth of product information in the form of reviews and comparisons, as well as special offers and promotions, more and more shoppers are browsing their mobile devices in store. Now researchers at IBM Labs are looking to make it easier for shoppers to get instant product details and deals in-store with a new augmented reality (AR) shopping app. … While shoppers get instant access to the wealth of product information available online, retailers would also benefit. They can use the app to attract customers back with the use of loyalty programs and digital coupons, while also gaining an understanding of customer preferences that would enable them to suggest related products in other aisles. IBM says that because such suggestions would be tailored to individual customer preferences and occur in-store, they would not be seen as intrusive or annoying. The app would also help retailers optimize floor plans and the location of products in-store. The augmented reality app is currently still at the prototype stage, but expect it to be merging the online and offline shopping experience in the not too distant future.”

As I noted above, I believe that IBM is headed in the right direction with its new application. The following IBM infographic demonstrates why IBM believes that there is a business opportunity. 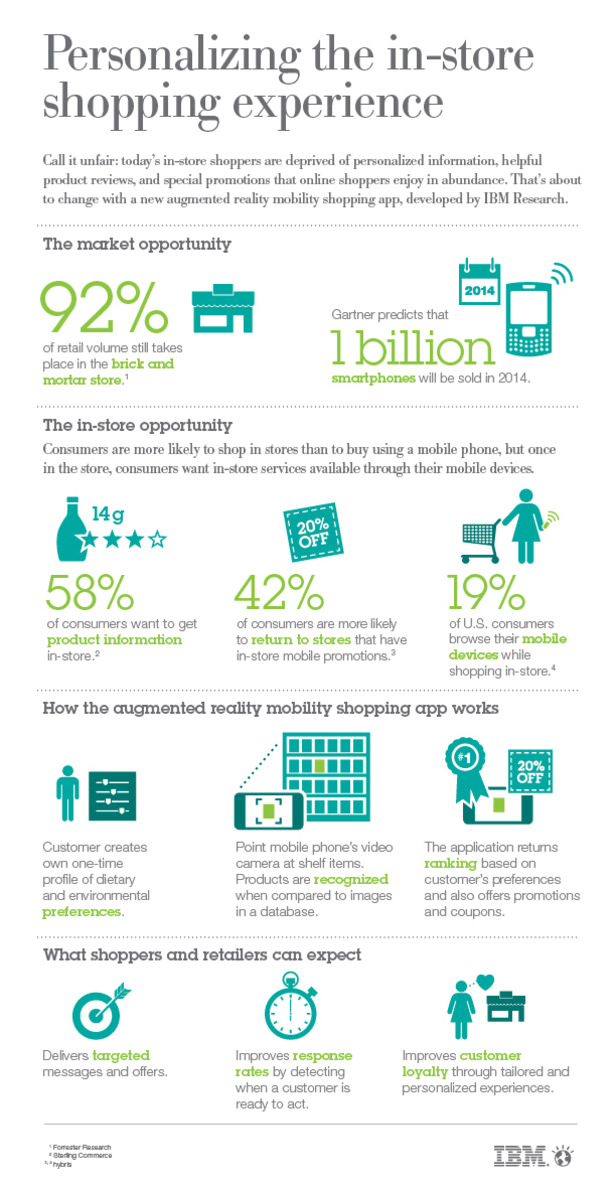