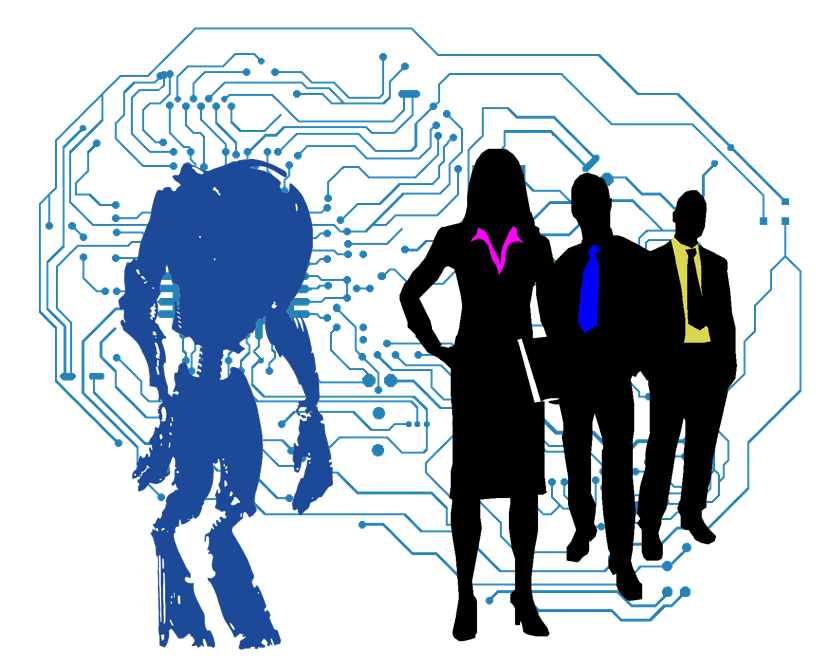 “Machines are good at complex tasks,” writes Lynda Gratton (@lyndagratton), a professor of management practice at London Business School, “but not at activities that humans find simple. The answer is for people and computers to work together.”[1] Gratton’s conclusion is one that a lot of people are slowly but surely coming to accept — people are going to be collaborating with machines in ways unimagined in the past. The prospect worries some people and excites others. One proponent of human/machine collaboration, Ben Rossi (@BenRossi89), asserts, “Humans are using machines to take on more challenging tasks while achieving greater operational efficiency. Humans and machines are accomplishing more together than either could have their own.”[2] Of course, humans have a long history of working with machines; but, Rossi is referring to smart machines (i.e., computers and robots guided by artificial intelligence (AI) functionality). He explains:

“Rapid advances in more natural human interfaces, wearable devices and smart machines are extending intelligent technology to interact as a ‘team member’ or ‘co-worker’ operating alongside employees. … Many enterprises have learned that, while machines excel at precision, scale and consistency, humans are better suited for creativity, contextual understanding and complex communications. Now companies are using their strengths together to boost process productivity. … Companies that reimagine their workforce and effectively blend humans and technology as partners will establish a strong competitive position in the years ahead.”

Brookings analysts Mark Muro (@MarkMuro1) and Scott Andes (@scott_andes) offer more evidence bolstering the conclusion that human/machine collaboration will be a significant characteristic of the future business landscape.[3] “Robots are everywhere,” they write, “but they are also an object of confusion.” The confusion, they note, emerged when robots prompted mass layoffs in some industries yet production seemed to remain flat. They report, however, that “empirical evidence is beginning to trickle in that could begin to clear up the current paradox.” They point to analysis offered by George Graetz (@georggraetz) and Guy Michaels of Uppsala University and the London School of Economics that concluded, “The use of robots within manufacturing raised the annual growth of labor productivity and GDP by 0.36 and 0.37 percentage points, respectively, between 1993 and 2007. That might not seem like a lot but it represents 10% of total GDP growth in the countries studied and 16% of labor productivity growth over that time period.” Muro and Andes add, “There is another critical question that needs asking, and that is whether the robots’ productivity impacts are resulting in job losses.” The short answer is “no.” They elaborate:

“If robots are a substitute for human workers, then one would expect the countries with higher investment rates in automation to have experienced greater employment loss in their manufacturing sectors. … By our calculations there is, as yet, essentially no visible relationship between the use of robots and the change in manufacturing employment. Despite the installation of far more robots between 1993 and 2007, Germany lost just 19% of its manufacturing jobs between 1996 and 2012 compared to a 33% drop in the U.S. (We introduce a three-year time lag to allow for robots to influence the labor market and continued with the most recent data, 2012). Korea, France, and Italy also lost fewer manufacturing jobs than the United States, even as they introduced more industrial robots. On the other hand, countries like the United Kingdom and Australia invested less in robots but saw faster declines in their manufacturing sectors.”

Those findings certainly suggest that Gratton and Rossi got it right — human/machine collaboration improves productivity and provides companies with a competitive edge. Accenture analysts H. James Wilson (@hjameswilson) and Cyrille Bataller report that robots are not the only smart machines that boost productivity and provide a competitive edge, artificial intelligence systems also make the workforce better.[4] They write:

“We all know that computers can sometimes automate work, taking jobs away from humans. But it can augment human workers as well, making them more effective. In our ongoing research, we’ve found that so far augmentation is far more common, even in the emerging area of ‘cognitive computing,’ in which machines can sense, comprehend, and even act on their own. In this sense, cognitive computing is more about ‘Person and Machine’ than ‘Person versus Machine’.”

Wilson and Bataller go on to discuss how “digital assistants you can trust” will improve day-to-day effectiveness; how AI software will be used to make experts better at what they do; how cognitive computing will enable innovation; and, how, one day, brain/AI interfaces could rapidly advance human knowledge. They conclude, “Effectiveness, expertise, and innovation can all be improved when the physical and psychological barriers between human and machine are reduced or at the very least smoothed over. It should be a goal of designers, then, to consider the interactions that best foster these powerful, emerging collaborations.” An article in The Economist states, “Perhaps the best way to think about AI is to see it as simply the latest in a long line of cognitive enhancements that humans have invented to augment the abilities of their brains.”[5] The article continues:

“It is a high-tech relative of technologies like paper, which provides a portable, reliable memory, or the abacus, which aids mental arithmetic. Just as the printing press put scribes out of business, high-quality AI will cost jobs. But it will enhance the abilities of those whose jobs it does not replace, giving everyone access to mental skills possessed at present by only a few. These days, anyone with a smartphone has the equivalent of a city-full of old-style human ‘computers’ in his pocket, all of them working for nothing more than the cost of charging the battery. In the future, they might have translators or diagnosticians at their beck and call as well. Cleverer computers, then, could be a truly transformative technology.”

Pew Research Center analysts Aaron Smith and Janna Anderson report, “The vast majority of respondents to the 2014 Future of the Internet canvassing anticipate that robotics and artificial intelligence will permeate wide segments of daily life by 2025, with huge implications for a range of industries such as health care, transport and logistics, customer service, and home maintenance.”[6] As President and CEO of cognitive computing firm, I obviously agree with the conclusion of the respondents in the Pew survey. The Enterra Enterprise Cognitive System™ (ECS) is adaptable to almost any situation and adds semantic reasoning to advanced mathematical calculations to provide unique insights. We built it as a system that can enhance human performance and improve decision making. The uses to which cognitive computing systems can be applied are only limited by the imagination. Although prognostication is always a gamble, it seems a fair bet to conclude that humans and machines (either smart robots or cognitive computers) are going to be working side-by-side in decades ahead.

Footnotes
[1] Lynda Gratton, “What will artificial intelligence mean for the world of work?” The Guardian, 17 February 2015.
[2] Ben Rossi, “A reimagined workforce: blending humans and machines in the digital age,” Information Age, 27 April 2015.
[3] Mark Muro and Scott Andes, “Robots Seem to Be Improving Productivity, Not Costing Jobs,” Harvard Business Review, 16 June 2015.
[4] H. James Wilson and Cyrille Bataller, “How People Will Use AI to Do Their Jobs Better,” Harvard Business Review, 27 May 2015.
[5] “Rise of the machines,” The Economist, 9 May 2015.
[6] Aaron Smith and Janna Anderson, “AI, Robotics, and the Future of Jobs,” Pew Research Center, 6 August 2014.