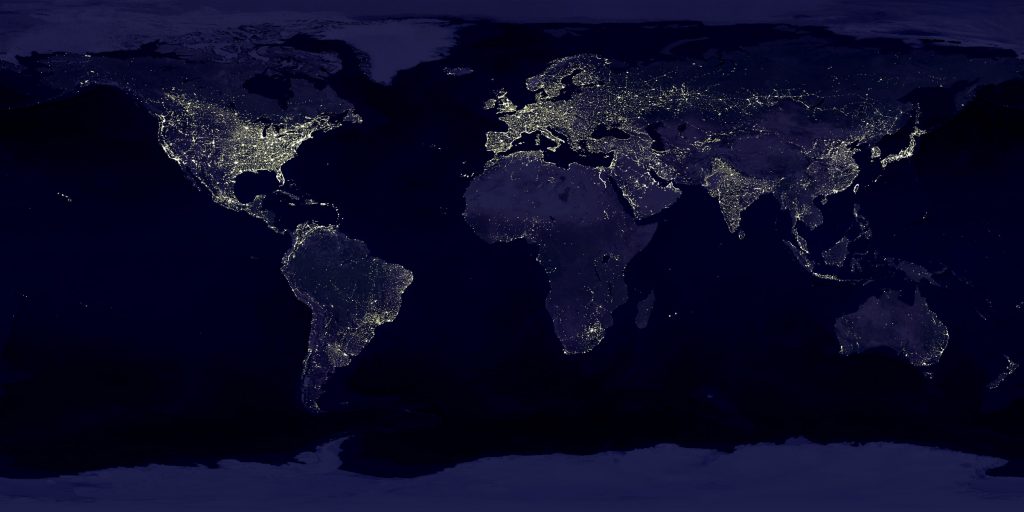 “Eradicating extreme poverty, measured as people living on less than $1.25 U.S. a day, by 2030 is among the sustainable development goals adopted by United Nations member states last year,” writes Umberto Bacchi (@UmbertoBacchi).[1] He goes on to report, “A new technique using artificial intelligence to read satellite images could aid efforts to eradicate global poverty by indicating where help is needed most.” You might be asking yourself: Don’t we already know where poverty exists around the globe? The simple answer is that in many areas of the world, data about poverty is sorely lacking. You might then ask, “What can we learn from satellite images that we don’t already know?” Images are a form of data. Lots of images generate lots of data, lots of data requires artificial intelligence (AI) to analyze it, and advanced analytics can generate new insights and knowledge. As in most other areas, knowledge is power in the fight against poverty. Miriam Kramer (@mirikramer) explains, “Powerful eyes in the sky can pick out homes, natural formations, the pyramids and even small cars driving on roads. And now, scientists are using the wealth of data collected by these satellites to solve major problems on Earth.”[2] Obtaining data from “off the grid” areas is particularly problematic. Sarah Emerson (@SarahNEmerson) explains, “Getting aid to impoverished Africans is hard enough, what with blockades of bureaucracy and red tape. But in many African countries, bad data, or a lack of it, makes distributing funds even more troublesome.”[3] Satellite images and artificial intelligence can help fill in the gaps in areas where lack of data is a problem.

The team of researchers experimenting with this new technique is from Stanford University. One of the team members, Neal Jean (@nealjean1), a doctoral student in computer science, told Emerson, “Fighting poverty has always been this shining goal of the modern world. It’s the number one priority for the United Nation’s 2030 Agenda for Sustainable Development, but the major challenge is that there’s not enough reliable data. It’s really hard to help impoverished people when you don’t know where they are.” Other team members include: Marshall Burke, Michael Xie, W. Matthew Davis, David B. Lobell, and Stefano Ermon. Finding where poor populations live is the primary goal of the Stanford team’s research. Their results were published in the journal Science. According the article’s teaser, the Stanford team combined nighttime maps with high-resolution daytime satellite images and then, “with a bit of machine-learning wizardry”, used the combined images to generate “accurate estimates of household consumption and assets, both of which are hard to measure in poorer countries.” Most of us have seen a composite picture of the Earth at night showing areas that are well illuminated. The Stanford team theorized that nighttime lighting could provide a rough proxy for economic wealth (i.e., areas of poverty would be poorly illuminated). The article’s abstract reads:

“Reliable data on economic livelihoods remain scarce in the developing world, hampering efforts to study these outcomes and to design policies that improve them. Here we demonstrate an accurate, inexpensive, and scalable method for estimating consumption expenditure and asset wealth from high-resolution satellite imagery. Using survey and satellite data from five African countries — Nigeria, Tanzania, Uganda, Malawi, and Rwanda — we show how a convolutional neural network can be trained to identify image features that can explain up to 75% of the variation in local-level economic outcomes. Our method, which requires only publicly available data, could transform efforts to track and target poverty in developing countries. It also demonstrates how powerful machine learning techniques can be applied in a setting with limited training data, suggesting broad potential application across many scientific domains.”

The following video produced by the Stanford team explains its methodology and aspirations.

Emerson explains how data, like that generated by the Stanford team, could help countries like Angola. She writes:

“Look at Angola, for instance. Forty years have passed since the country gained independence from Portugal, but its first postcolonial census was conducted just two years ago. The African nation is unfathomably rich in crude oil, but after 27 continuous years of civil war, half of its people live in poverty. Unfortunately, with scarce data on their economic well-being, it’s nearly impossible to create programs that could help Angola’s poorest communities, because no one knows exactly what is needed. … Using satellite imagery to estimate concentrations of wealth isn’t new. Other researchers have already determined that ‘nightlights,’ or artificial light pollution, can be indicative of economic activity in developing nations. Theoretically, higher luminosity could mean more infrastructure, development, and wealth. Though it’s worth noting that other models found it difficult to differentiate extremely low light levels from zero. For the same reason, nightlights are also less useful in places that are densely populated. What’s novel about the new study, however, is that the algorithm was able to close data gaps based on patterns it learned from looking at satellite shots. According to Jean, around 4,096 economic markers were identified in daylight images, including roads, urban areas, and waterways. By recognizing these features, the algorithm was then able to anticipate which areas would exhibit high luminosity at night.”

The Preamble to the 2030 Agenda for Sustainable Development notes, “We recognize that eradicating poverty in all its forms and dimensions, including extreme poverty, is the greatest global challenge and an indispensable requirement for sustainable development.” Eradicating poverty is an imperative from both a moral and economic standpoint. I don’t need to elaborate on the terrible consequences of poverty or on the economic benefits for society as a whole as people are lifted out of poverty. The 2030 Agenda for Sustainable Development goes on to note, “Significant progress has been made in meeting many development challenges. Within the past generation, hundreds of millions of people have emerged from extreme poverty. Access to education has greatly increased for both boys and girls. The spread of information and communications technology and global interconnectedness has great potential to accelerate human progress, to bridge the digital divide and to develop knowledge societies, as does scientific and technological innovation across areas as diverse as medicine and energy.” That’s good news; however, it also admits, “Billions of our citizens continue to live in poverty and are denied a life of dignity.” Artificial intelligence is only a tool to help identify areas of need; but, it is an important tool. As Kramer notes, “This new technique could help revolutionize the way groups find impoverished areas and eventually get relief to people living in those specific parts of the world. Today, aid workers conduct surveys on the ground in poor areas, but that kind of mapping is incredibly time-consuming and even expensive. Developing a faster, more automated system could save time and money. Plus, it could help get aid to those who need it more quickly.”