Home » Artificial Intelligence » Are We in the Midst of the Century of Software?

Are We in the Midst of the Century of Software?

While reporting on topics covered at the October 2012 World Resources Forum in Beijing, student Anna Leijonhufvud wrote about a talk given by Dr. Bradfield Moody, co-author of a book entitled The Sixth Wave: How to succeed in a Resource limited world. She writes, “He describes how, during the last century, we have seen five waves of innovation transform society, economies and industries. This started with industrial revolution, leading to the current and fifth wave of information and communications technology. Nevertheless, Dr. Bradfield Moody argues that the current wave has reached its peak and that a new wave of innovation is slowly emerging.” [“From the Industrial Revolution to Communication Technologies – What is the Next Wave of Innovation?” student reporter, 28 October 2012] She includes the following graphic in her post to demonstrate the five waves discussed by Moody. 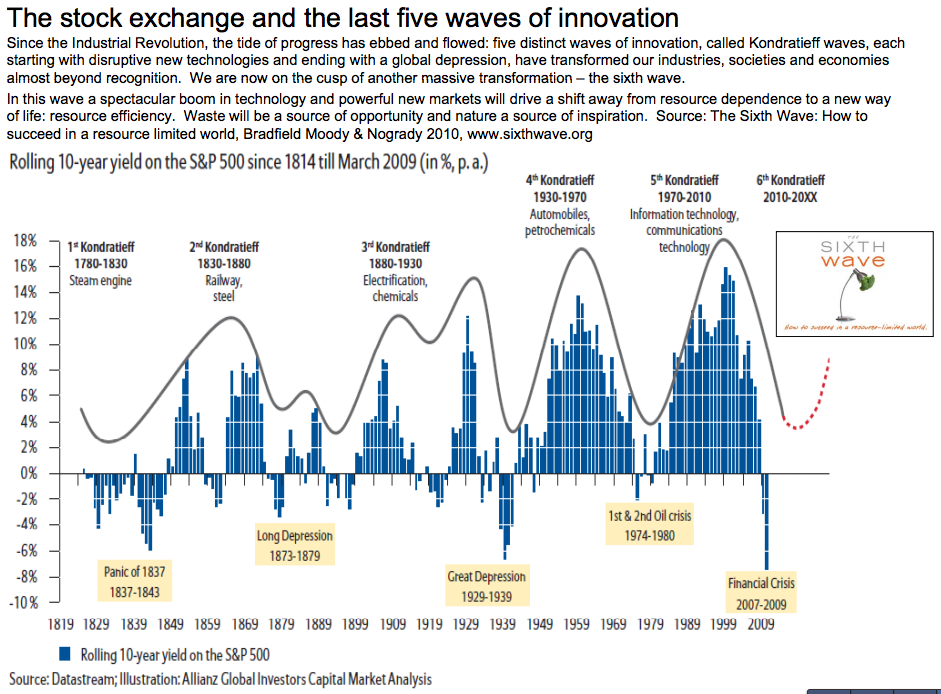 The discussion of The Sixth Wave found on the book’s website, states:

“THE SIXTH WAVE examines the big things, such as rising energy and food prices and the debate about climate change, and the way these factors are shaping investments in clean technologies, now accounting for the most venture-capital investment of any sector in the United States. And smaller things, such as the race between Google and Microsoft to take millions of photos of some of the largest cities in the world and create 3D images from these photographs. And then there are the very little things that happen on a big scale. For example, if you have a phone equipped with the technology called Bluetooth, you can use your phone to search for other Bluetooth devices. You will find a large number of other phones, each emitting its identification number. Now, imagine that it wasn’t just telephones you could see, but every product and every item around you. What do all these things have in common? They are all part of the same trend – a trend that will fundamentally transform human society: The sixth wave of innovation.”

One of the common threads in that paragraph that weaves its way through both the big and the small things is data — big data. But big data is only useful if it can be analyzed and the resulting insights acted upon. Although that is not the “trend” to which Moody refers, big data will help drive the sixth wave of innovation. What Moody believes will be the primary driver of innovation is resource scarcity, which he believes will require a new way doing things in the future. Leijonhufvud reports that Moody’s “research predicts this sixth wave to be driven by resources efficiency, incorporating numerous changes in production and consumption patterns.” She continues:

“One example is the movement from a consumption of products to a consumption of services. Currently, there are distorted incentives between buyers and sellers, for instance, if you buy a new washing machine. You, as a consumer, want it to last as long as possible but the company selling the washing machine to you, has the incentive for the machine to last but a few months after the warranty runs out. However, if a business offers you a service of clothing washing, the company would then have the incentive to produce washing machines that last longer.”

To learn more about this topic, read my post entitled Supply Chain Sustainability and the Move towards a Circular Economy. Although Moody may be correct that resource scarcity will be a principal driver of innovation in the future, Greg Twemlow believes that this century will be known as the “Software Century.” [“Why the 21st century will be remembered as the ‘Software Century’,” Australian Anthill, 26 October 2012] He writes:

“The 20th century could be aptly named ‘the device century.’ From the early 1900s onward life changed quickly and dramatically thanks to the building of a network, the electricity network (EN). That network facilitated all manner of dramatic changes to society and enabled all kinds of useful devices to be developed, not least of which was the computer. The establishment of the EN created a market, an appetite for things to attach to the network. So, if the 20th century was all about the electricity network and the devices that attached to that network, then surely the 21st century is all about the Data Network (DN) and the software that runs on that network – making this ‘The Software Century’.”

Twemlow’s ideas aren’t too different than Moody’s. After all, Moody’s third wave of innovation began around the turn of the last century and involved widespread electrification. Twemlow insists that “we are experiencing the same opportunities that our forebears experienced in the early 20th century. Our 21st century enabling network provides a platform for amazing changes to our society and even more amazing business opportunities.” I tend to agree with him, which is why I believe that big data, analytic technologies, and artificial intelligence will combine to make this the Software Century. Twemlow continues:

“The DN has been enabled by the Electricity Network (EN) and now The Cloud is adding tremendous value to the DN. What we are calling The Cloud today is, in essence, functionality available on the DN. The Cloud is software (functionality) that sits directly on the Data Network and all of that functionality is instantly accessible globally. The Cloud is giving the DN increasing capabilities and is able to deliver knowledge and insight to whoever has access, and these days that means over 2.5 billion people. That adds up to over two billion people directly empowered by the most amazing enabling technology the world has ever created.”

Twemlow goes on to discuss how The Cloud’s primary benefit rests upon the foundation of big data. He continues:

“The major piece of the puzzle that is being incorporated into The Cloud is the functionality to rapidly gain insights into the enormous data repositories and the huge volume of transactions moving across the network. This piece of the puzzle is what we today call ‘Big Data.’ Watch out for Big Data subscription services that will enable all application owners to enjoy amazing insights into the behaviour of their users. A final piece of Cloud functionality that will then be added is Artificial Intelligence; the means for the DN to use the insights from Big Data to make decisions autonomously based on a clear base of rules (remember Isaac Asimov’s three rules of robotics). Big Data apps have the capability to glean meaning and trends from the petabytes of data that flow across the DN every hour and feed that analysis into Artificial Intelligence systems that are empowered to take action. Ultimately Artificial Intelligence functionality will be available on a subscription basis too.”

Since my company, Enterra Solutions®, defines itself as a cognitive Big Data Analytic/Insights and Supply Chain Technology firm that delivers its technologies through Solution-as-a-Service (SaaS) offerings specializing in the application of artificial intelligence and a rules-based ontology to solve complex business problems, I believe the future is arriving faster than even Twemlow might have thought. He notes that “the speed of the DN is being dramatically improved which will only increase the volume and value of the information being carried and give even greater importance to the use of Big Data.” Like Moody, Twemlow believes that historical patterns repeat themselves which is why, he insists, the 21st century is repeating the 20th century which repeated the 19th century. He explains:

“Historians will no doubt point to other enabling networks in previous centuries that created incredible business opportunities. Think about the rail network of the 19th century and the shipping network of the 18th century. I imagine if we studied the business models of those prior centuries we may well glean a few insights into how we might make the best use of our century’s enabling network. So, if this is the Software Century, I wonder what the network enabler of the 22nd century will be?”

If Twemlow is correct and the 21st century is the Software Century thanks to data networks, then I suspect that the 22nd century will see machine networks as the next enabler of innovation and progress. There is already a tremendous amount of machine-to-machine communication taking place (see my post entitled Machine-to-Machine Communication). Whatever the future holds, the next wave of innovation will come and the pattern of progress will go on repeating itself. It might be hard to see the dawn of a brighter future during the dark night of global recession, but it’s approaching. I don’t know whether it burst forth like a sunrise on the ocean or slowly brighten the economic landscape like the sun climbing the backside of a mountain range, but I do know that when the next wave of innovation comes the results will be brilliant.