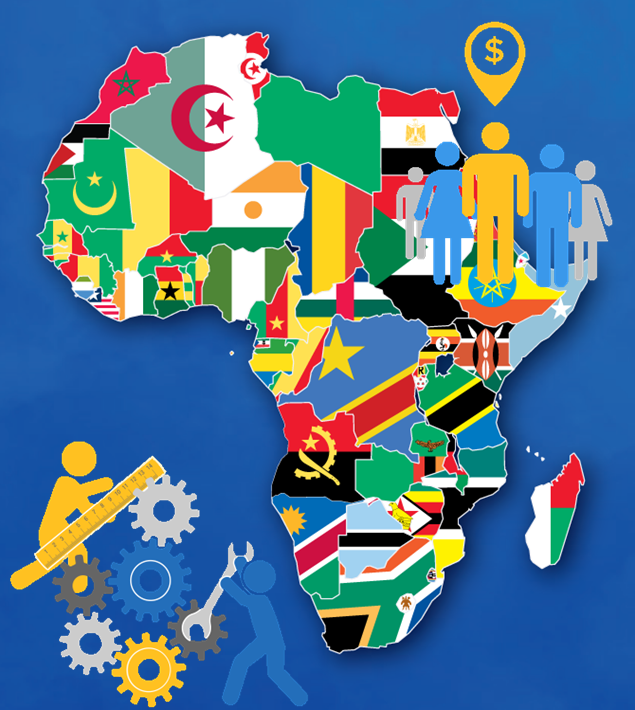 In a review of a book entitled Emerging Africa: How the Global Economy’s Last Frontier Can Prosper and Matter, Katrina Manson (@KatrinaManson) writes, “Hailing Africa’s glowing fortunes has become standard for anyone keen to flirt with the ‘frontier’.” She adds, “But the old clichés — that of a continent characterised by war, poverty and pestilence — have been replaced by too many new ones.”[1] The book’s author, Kingsley Chiedu Moghalu, is deputy governor of the Central Bank of Nigeria. He is considered by many to be one of Africa’s leading economic thinkers and policymakers. He has a doctorate from the London School of Economics and he also attended Tufts University’s Fletcher School of Law and Diplomacy. He worked nearly two decades for the United Nations in New York, Cambodia, Croatia, Tanzania, and Switzerland, and was the founder and CEO of Sogato Strategies SA, a global risk and strategy advisory firm in Geneva, Switzerland. Clearly, Moghalu understands the African continent and how it relates to the rest of the world. He also understands that lumping all African countries together doesn’t make much sense for most discussions.

African nations do not form a homogeneous group. Each African nation must be analyzed on its own to determine its unique capabilities, resources, governance, and drawbacks. Despite all of this diversity, reading today’s headlines one would think that Africa is a single nation. In some ways, this chimera is understandable. Conglomerating everything together makes Africa look inviting. Manson writes, for example, “In the eyes of hopeful investors, the continent is now a territory of 1bn consumers, set to grow faster than any other region.” Popping this illusion, she writes, “Neither take is convincing or illuminating.” She notes that Moghalu doesn’t like these characterizations of Africa because they represent a future of the continent that is primarily determined by outsiders, making Africa “a playground for globalization.” According to Manson, Moghalu’s vision of Africa is one developed from the inside out rather than the outside in. “He wants a permanent economic transformation through industry, knowledge and a new mindset that will deliver jobs,” she writes. “And he wants to do it through entrepreneurial capitalism instead of the corrupt crony governments that tend to lead the way.”

So what’s the truth about African countries? Are they going to remain mired in poverty or do they have a bright future? As noted above, the picture is mixed because African nations were not created equal. As most people know, national borders in Africa have more to do with colonialism than with natural features or ethnicity. Even lumped together, however, Manson notes that things are not as cheery as once believed. “A few years back,” she writes, “the more heady surveys claimed 300m people for the ‘middle class’ that so excites multinationals. Today’s surveys, calculated differently, put it closer to 15m households, leading some global companies to scale back their plans for what they had deemed the ‘new Asia’. Add to that presidents apparently bent on ruling beyond their mandates, plus the growing specter of jihadi movements across the continent, and the picture is as messy as one might expect of undeveloped countries coping with high growth before they have dealt with ethnic conflict, land tenure and political chicanery.” In other words, if you are a multinational corporation looking to expand into the African market, you better do so with your eyes wide open. Having said all that, Manson nevertheless notes that Moghalu does want to discuss Africa as a whole. She explains:

“He argues the ingredient missing from his continent’s transformation is a distinctly African worldview. Rather than laboring the point that Africa is a continent of more than 50 separate nations, a caveat every Africa-watcher feels compelled to repeat, he argues for the emergence of an all-encompassing view taking in everything from trade to ambition to personal identity, to rival that of the west or ascendant Asia. He wants to ‘lift the veil on the collective consciousness of Africa’ and change the way its people think; an ‘Africa consensus’ as weighty and formative as the Washington or Beijing versions, the contrasting policy prescriptions for economic growth and stability of our age. He blames neither the west nor China, neither colonialism nor capitalism, for Africa’s shortfalls. More than leadership, even, he wants vision.”

All I can say to that is, “Good luck.” Countries of the Maghreb have little in common with sub-Saharan countries. Moghalu would have a better chance of achieving his vision if he looked for regional consensus rather than an Africa consensus. While I appreciate Moghalu’s desire for an inside-out rather than an outside-in solution to Africa’s economic woes, the economic destiny of most African nations still relies on their inclusion in a globalized world.

Kevin O’Marah, Chief Content Officer at SCM World, told the editorial staff at SupplyChainBrain that all of the bad news coming out of Africa could discourage companies looking to expand there; however, he believes that would be a mistake. “With stories of Ebola and Boko Haram dominating the news,” he stated, “it would be easy to dismiss Africa from a supply chain perspective. Risk is clearly high and traditional reasons to engage supply chain — either for low-cost sourcing or new market entry — may seem absent. The truth, however, is that many supply chain leaders should start thinking now about how to engage this vital emerging market.”[2] He went to explain why he believes companies must not abandon plans to expand into Africa.

“Looking at future population trends provides a compelling reason to consider how your company’s supply chain might work to serve Africa. United Nations data shows an obvious problem for companies, especially in consumer industries, who are too reliant on developed markets for their business. Saturation for such big categories as packaged foods, health and beauty products, apparel and most other consumer discretionary spending is a real issue when total populations in Europe, the Americas and even Asia within the next few decades flatten out. How much more toothpaste can we be persuaded to buy with great marketing? Africa, in stark contrast, is looking at nearly 80 years of high growth rates and is projected to comprise more than 3.5 billion people by century’s end. The vast majority of this population still has minimal access to consumer products and thus huge amounts of unmet demand. The ability to pay is also part of making Africa attractive as a growth market and data analysed by McKinsey & Co. points to a strong positive trend here also. Income distribution as recently as 2000 saw a clear majority of all households on the continent effectively too poor to have meaningful discretionary income. As of 2008, those numbers had changed enough that by 2020 a clear majority is expected to be classified as consuming households. This means that five years from now Africa will contain 127 million shopping families.”

Cliff Waldman, Director of Economic Studies at the MAPI Foundation, shares O’Marah’s optimism about the African continent. “When Africa makes the news,” he writes, “it is seldom for a positive reason. The average reader or viewer unfortunately associates this vast and highly diverse continent with the scourge of Ebola and Boko Haram. While these stories are modern instances of a long history of strife, the pessimistic media bias is unfortunately blocking what should be important stories regarding positive signals from the economic front.”[3] He elaborates on these thoughts:

“The evidence of strengthening is increasingly persuasive. Between 2000 and 2010, the share of the African population living on less than $1.25 per day fell from 58% to 48%. In no small part, the falling rate of extreme poverty is driven by much-improved output performance. For U.S. goods producers, a compelling consideration is the path of industrialization and the role it will play in sustainable development across the continent. … Amidst difficult health and terrorism challenges, Africa is showing potential on the economic front. The question now is sustainable performance. While China’s rise and a lengthy period of high commodity prices and low interest rates have certainly been stimulative for Africa’s economy, hints of structural change have also been seen, however weak. As manufacturing begins to play a larger role, observers are noting less negative impact from the current period of raw material market weakness. This long-troubled continent needs a program for widespread and sustained industrialization. Active policies to continue to attract inward foreign direct investment and capitalize on a considerable demographic advantage could very well push the African economy to a new day.”

Multinational companies can play a large role in advancing manufacturing on the African continent. Manufacturing always brings with it a supply chain tail that employs more people than the manufacturing plants themselves. Add to that employment picture jobs that will be created to build the infrastructure necessary to support both manufacturing and the supply chain and you can see why Waldman is hopeful that Africa will become Emerging Markets’ last frontier. Clearly, Africa’s future remains unclear. Good news and bad news seem to be served up in equal measure. One thing is clear, however, there is large, underserved population brimming with hope and looking for a way to work its way out of poverty.