3D Printing and the Supply Chain

The editorial staff at Supply Chain Digest asks an interesting question: “How Soon will ‘Printed’ Parts Revolutionize Supply Chains – and the World?” [22 February 2011] I first posted a blog that mentioned 3D printers back in November 2006. I discussed the subject at more length the next year in a post entitled Where is My Replicator? At that time, 3D printers were still pretty much an expensive novelty item. Staffers at Supply Chain Digest write, “The world of digitally ‘printed’ components and finished goods is (somewhat under the radar screen) achieving enormous technical improvements and has moved rapidly from vision to reality, with enormous potential implications for supply chains and business.” Items made plastic powder have limited use; but, how about something “printed” out of titanium? That is exactly what is happening over in the UK [“The printed world,” The Economist, 10 February 2011] The article reports:

“Filton, just outside Bristol, is where Britain’s fleet of Concorde supersonic airliners was built. In a building near a wind tunnel on the same sprawling site, something even more remarkable is being created. Little by little a machine is ‘printing’ a complex titanium landing-gear bracket, about the size of a shoe, which normally would have to be laboriously hewn from a solid block of metal. Brackets are only the beginning. The researchers at Filton have a much bigger ambition: to print the entire wing of an airliner.”

Now there’s a print job! The article admits that this may seem “far-fetched”; but it reports that “people are using three-dimensional printing technology to create similarly remarkable things. These include medical implants, jewelry, football boots designed for individual feet, lampshades, racing-car parts, solid-state batteries and customized mobile phones. Some are even making mechanical devices.” It continues:

“Engineers and designers have been using 3D printers for more than a decade, but mostly to make prototypes quickly and cheaply before they embark on the expensive business of tooling up a factory to produce the real thing. As 3D printers have become more capable and able to work with a broader range of materials, including production-grade plastics and metals, the machines are increasingly being used to make final products too. More than 20% of the output of 3D printers is now final products rather than prototypes, according to Terry Wohlers, who runs a research firm specializing in the field. He predicts that this will rise to 50% by 2020.”

“The basic idea is to use digital information and specialized equipment to create parts, components or complete products on-demand, generally in low volumes, in a way that makes economic sense. In Europe, the technique is generally known as ‘rapid manufacturing,’ while direct digital manufacturing, or ‘DDM,’ is the more popular term in the US.”

The Supply Chain Digest article with which I began this post asserts that “company executive personnel need to get more in front of this technology wave.” The article continues:

“The ultimate impact on the supply chain from digital printing could be enormous. For starters, more rapid prototyping can shrink product development cycles and development costs, and therefore lead to even more rapid innovation cycles. Similarly, more new product concepts likely will be pursued because the cost and time to prototype those ideas will be less. A new era of true ‘mass customization’ could be ignited, making the vision of such a world first hyped in the dot com era of the late 1990s a reality at last. From tennis shoes that are built precisely to the shape of a consumer’s foot (left one a little longer, you say?) to precisely designed medical devices, the potential is almost endless.”

There are also environmental benefits to direct digital manufacturing. As the earlier Supply Chain Digest article notes, “parts can be made in a distributed way geographically, close to the actual need.” With many of us suffering from gasoline price shock at the moment, being able to manufacture products near where they are actually needed could dramatically reduce transportation costs (and the carbon footprint associated with that transportation). DDM also reduces waste since the powders used in the process can are used precisely and extra material can be made immediately available for the next job. The staff at Supply Chain Digest states that all of that means that “the quality and/or cost of some products could also come down.” Another benefit of DDM, is that it can produce “designs that simply can’t be replicated well by traditional production.” As a result, the authors conclude:

“Jewelry, furniture and many other consumer product areas could be revolutionized by the approach, and has some people wondering if the dynamics will in some cases lead to domestic digital production of some items versus offshore manufacturing in low costs countries. While for some time at least the actual unit cost is likely to be higher for the printed product, consumers in some categories may be willing to pay more to get exactly what they want. This in turn may lead to regional or local digital printing facilities where consumers or business can go to pick up the products they may even have designed themselves. Today, Nike produces its customer-designed ‘Nike ID’ shoes in Asia and ships them to the US. In the future, the shoes may be printed quite close to that consumer’s home, and be available in days rather than weeks as is now the case.” 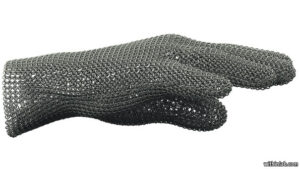 To give you some example of how intricate 3D printer designs can be, The Economist article included the attached image of a chain mail glove. In year’s past, an artisan would have to obtain wire, bend it, and then individually secure each piece of “chain” into the desired shape — obviously, the traditional process is costly and time consuming. The article reports:

“Using 3D printers as production tools has become known in industry as ‘additive’ manufacturing (as opposed to the old, ‘subtractive’ business of cutting, drilling and bashing metal). The additive process requires less raw material and, because software drives 3D printers, each item can be made differently without costly retooling. The printers can also produce ready-made objects that require less assembly and things that traditional methods would struggle with—such as the glove pictured above, made by Within Technologies, a London company. It can be printed in nylon, stainless steel or titanium.”

Reporters from The Economist agree with those from Supply Chain Digest that direct digital manufacturing could revolutionize how things are made. They conclude:

“The printing of parts and products has the potential to transform manufacturing because it lowers the costs and risks. No longer does a producer have to make thousands, or hundreds of thousands, of items to recover his fixed costs. In a world where economies of scale do not matter any more, mass-manufacturing identical items may not be necessary or appropriate, especially as 3D printing allows for a great deal of customization. Indeed, in the future some see consumers downloading products as they do digital music and printing them out at home, or at a local 3D production center, having tweaked the designs to their own tastes. That is probably a faraway dream. Nevertheless, a new industrial revolution may be on the way.”

The folks at Supply Chain Digest believe that “tool and die shops which currently produce molds for manufacturers” should be particularly concerned with this new technology. It could be as disruptive for them as digital calculators were for companies that made slide rules. Engineers from the European Aeronautic Defense and Space Company (EADS) recently announced that they had manufactured a bicycle by “growing” its “components from a fine nylon powder, similar in concept to 3D printing.” [“EADS Airbike made of steel-strength nylon,” by Paul Ridden, 9 March 2011]. Ridden continues:

“Said to be as strong as steel, the end product is claimed to contain only a fraction of the source material used by traditional machining, and the process results in much less waste. It also has the potential to take manufacture to precisely where the component or product is needed, instead of being confined to factories often located a great distance away.”

EADS calls its process Additive Layer Manufacturing. By now you should be able to see why the folks at Supply Chain Digest conclude that direct digital manufacturing “has moved rapidly from vision to reality.”

If you think that printing large items, such as airplane wings, is far-fetched. How do you feel about body parts? Last year I wrote a post that discussed just that possibility [The Wild World of Medical Science]. In that post, I wrote:

“A story in The Economist claims “a machine that prints organs is coming to market” [“Making a bit of me,” 18 February 2010]. The article reports:

‘The great hope of transplant surgeons is that they will, one day, be able to order replacement body parts on demand. At the moment, a patient may wait months, sometimes years, for an organ from a suitable donor. During that time his condition may worsen. He may even die. The ability to make organs as they are needed would not only relieve suffering but also save lives. And that possibility may be closer with the arrival of the first commercial 3D bio-printer for manufacturing human tissue and organs. The new machine, which costs around $200,000, has been developed by Organovo, a company in San Diego that specializes in regenerative medicine, and Invetech, an engineering and automation firm in Melbourne, Australia. One of Organovo’s founders, Gabor Forgacs of the University of Missouri, developed the prototype on which the new 3D bio-printer is based. The first production models will soon be delivered to research groups which, like Dr Forgacs’s, are studying ways to produce tissue and organs for repair and replacement. At present much of this work is done by hand or by adapting existing instruments and devices. To start with, only simple tissues, such as skin, muscle and short stretches of blood vessels, will be made, says Keith Murphy, Organovo’s chief executive, and these will be for research purposes. Mr Murphy says, however, that the company expects that within five years, once clinical trials are complete, the printers will produce blood vessels for use as grafts in bypass surgery. With more research it should be possible to produce bigger, more complex body parts. Because the machines have the ability to make branched tubes, the technology could, for example, be used to create the networks of blood vessels needed to sustain larger printed organs, like kidneys, livers and hearts.’

“The article states that the ‘3D bio-printer works in a similar way to some rapid-prototyping machines used in industry to make parts and mechanically functioning models.”

I’m still a bit of skeptic when it comes to printing body parts; but, I’m a believer when it comes to direct digital manufacturing. I’m also a believer in “what if” scenario planning. If I were in the manufacturing or transportation sector, I might just want to run a “what if” workshop that includes a future in which extensive direct digital manufacturing is present. If the idea proves itself viable, it is likely to be a game changer. If you do decide to run a risk analysis workshop, I recommend that you begin by reading a post by Daniel Stengel entitled Personalized Products and their Impact on Supply Chain Design [Supply Chain Risk Management, 8 December 2010]. Stengel concludes, “Personalized products are going to be the order winners of the future.” He may just be right.