Home » Food and Drink » Your Mama Didn’t Know about Umami 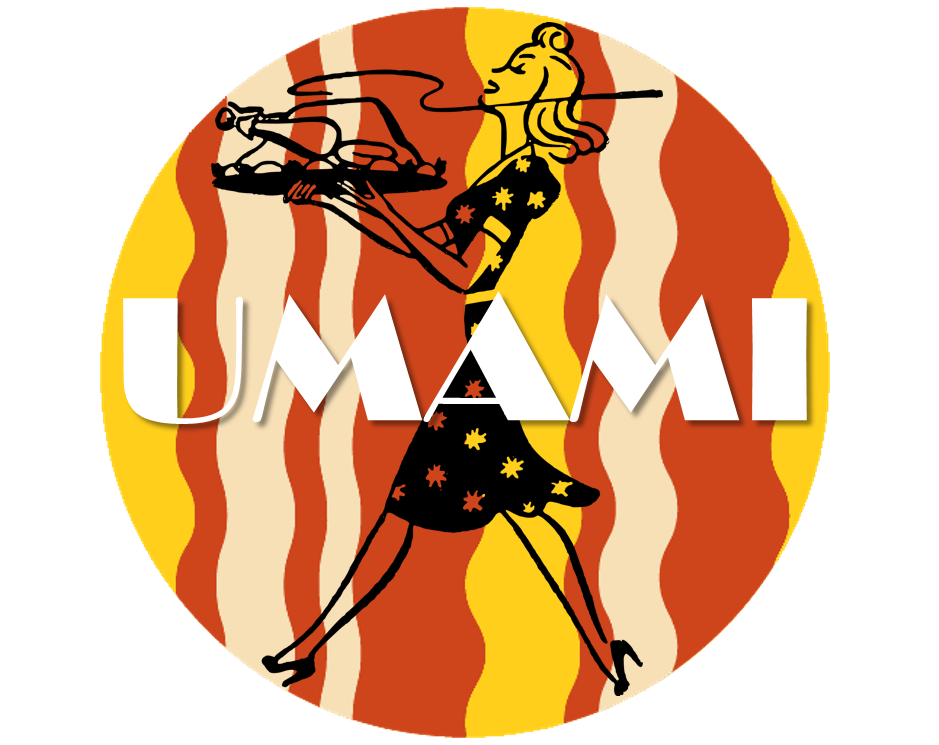 Your Mama Didn’t Know about Umami

“When it comes to flavor,” writes Melinda Johnson (@MelindaRD), a Clinical Assistant Professor for the Nutrition Program at Arizona State University, “umami is the shady character hiding in the dark corner. While the other tastes — sweet, salty, sour and bitter — all have an easily identified punch that’s delivered upfront, umami prefers subtlety and nuance. It is the mystery man of flavor profiles, adding a richness and depth that can only be summed up as je ne sais quoi.”[1] Umami, a Japanese word that roughly translates to “savory,” was recognized as the scientific term to describe the taste of glutamates and nucleotides back in 1985 at the first Umami International Symposium in Hawaii; however, the term has only achieved general recognition as a fifth taste in the last decade. Fat has now been added as a sixth taste (see my article entitled “Fat: You Need Some in Your Diet and It May be a Sixth Taste“). Over a dozen years ago Bernd Lindemann, Yoko Ogiwara, and Yuzo Ninomiya wrote, “While people tasted it daily, the fifth taste long remained unknown and unnamed. Its final discovery, made nearly a century ago, was due entirely to a single man, a chemistry professor at the Imperial University of Tokyo, Kikunae Ikeda.”[2] To learn more about Ikeda and the discovery of umami, read my article entitled “The Taste of Umami.” Unless you are very young (probably too young to read this article), I feel safe to say that your mama didn’t know about umami when you were growing up — at least not the term. Your mama DID know that savory foods were always welcome at the dinner table.

One umami-packed food that has enjoyed a long history as a favorite food is bacon. David Sax (@saxdavid), author of The Tastemakers: Why We’re Crazy for Cupcakes but Fed Up with Fondue, reports, “In the past decade, bacon has grown into an industry generating more than $4 billion in annual sales. It has moved from a breakfast meat to a food trend touching an incredible array of consumer goods, both edible and not, from bacon-heavy fast-food burgers and bacon-infused desserts at fine dining restaurants to bottles of bacon-distilled vodka and even a sexual lubricant formulated to smell (and taste) like bacon. More than cupcakes, ramen, or kale, bacon has become the defining food trend of a society obsessed with food trends.”[3] E.J. Schultz (@ejschultz3) agrees there has been a “bacon frenzy” and underscores that assertion by noting that Kraft joined the frenzy last year with a new product.[4] He explains:

“The bacon frenzy has finally made it to Philadelphia — cream cheese that is, which is rolling out a new variety flavored with the pork product. It seems like a no-brainer for Kraft Foods Group to fuse its Philadelphia and Oscar Mayer brands into one product. But putting bacon in cream cheese is apparently a bit harder than it sounds. ‘Bacon is a hard flavor to get just right,’ said Chris Hjorth, senior director for Philadelphia, noting that the brand wanted to ensure the ‘bacon notes’ came through ‘loud and clear,’ but that they were also balanced with the cream cheese. The product, which contains bits of bacon, took about 18 months to develop. The spread attempts to seize on America’s bacon fixation, while continuing the brand’s recent push into more flavors.”

I realize that not everyone has a bacon fixation (some people have religious reasons for not eating bacon, others have dietary reasons, and still others don’t like the taste). Nevertheless, the taste of bacon is a best-seller and one of the reasons is that bacon hits the umami spot. Sax notes, “In terms of economic impact, nothing beats bacon.” Johnson adds, “Research into umami has exploded recently, after scientists officially accepted it as the fifth taste that humans can sense.” Although bacon may not be the healthiest food you can eat, Johnson claims that umami infused foods can help us implement “a healthier diet overall and enjoy our food more.” She offers “three reasons to start adding a little more umami to your diet”:

1. Umami makes healthy dishes taste decadent. A diet that is lower in sodium and saturated fat is recommended for many people to reduce the risk of hypertension and heart disease. But a low-salt and low-fat diet is notoriously hard to follow, likely due to taste — food ends up being bland and dull. However, the strategic use of umami ingredients can help with this. In a study published last year in the Journal of Food Science, researchers replaced some of the beef with mushrooms in carne asada and beef tacos. They found that the added mushrooms created an equally pleasing flavor when compared to the original recipes, but allowed for the use of less salt and saturated fat.

2. Umami increases enjoyment of food. Lack of appetite can be problematic in some populations, particular in the elderly or chronically sick. When food doesn’t taste as good, intake decreases and health can spiral downward due to malnutrition. Researchers in Japan gave elderly patients who were losing weight due to loss of appetite a type of tea made from dry kelp before meals. They found that the added umami flavor served to increase their appetite and helped them regain some enjoyment in food.

3. Umami allows us to be satisfied with less food. In a study published in the American Journal of Clinical Nutrition in 2014, researchers were able to demonstrate that a combination of umami tastes, like when MSG is added to meat dishes, caused a unique spike in appetite during a meal but then a dip in appetite later, resulting in study participants eating less food overall during the day. The participants enjoyed their food more and were able to stay satisfied for longer after eating. Similarly, a study published last year in the journal Appetite found that adding umami flavor to low-calorie broth helped middle-aged women eat less overall calories and few fatty and sugary snacks later in the day.

None of those suggestions, however, may please bacon lovers. But there is hope. Stephen Hanley (@SteveHanleyRI) reports, “Researchers at Oregon State University announced they have patented a new strain of red marine algae, known as dulse, that grows extremely quickly and could serve as an excellent source of plant-based protein. According to researchers, it tastes exactly like bacon when it’s fried.”[5] He adds:

“But a new seaweed that tastes like bacon is only part of the good news. The dulse grows very rapidly and thrives in ocean waters with high concentrations of carbon dioxide, nitrogen, and phosphorous. While it grows, it removes those pollutants from the water, leaving the water cleaner than it was before. … A seaweed that helps clean the oceans and tastes good. That sounds like a recipe for success.”

Dulse may indeed be the answer to keep the bacon frenzy alive. Sax observes, “Despite frequent cries that we have reached peak bacon, the trend now looks like a permanent shift in dining habits. Sales in the U.S. are still growing about 10 percent a year, according to Marketresearch.com, a grocery industry website. That rate can’t continue — there is such a thing as too much bacon, even for Americans — and consumption will settle down at some point, maybe even decline some. Health concerns could flare up again, or pork belly prices could rise above $2 a pound.” Dulse eliminates those health fears and it is a lot less expensive and easier on the environment to raise seaweed than it is to raise hogs. Of course, bacon isn’t the only flavor that scratches the umami itch. Even if the bacon frenzy dies out, people will still crave savory flavors to make their food taste delicious.