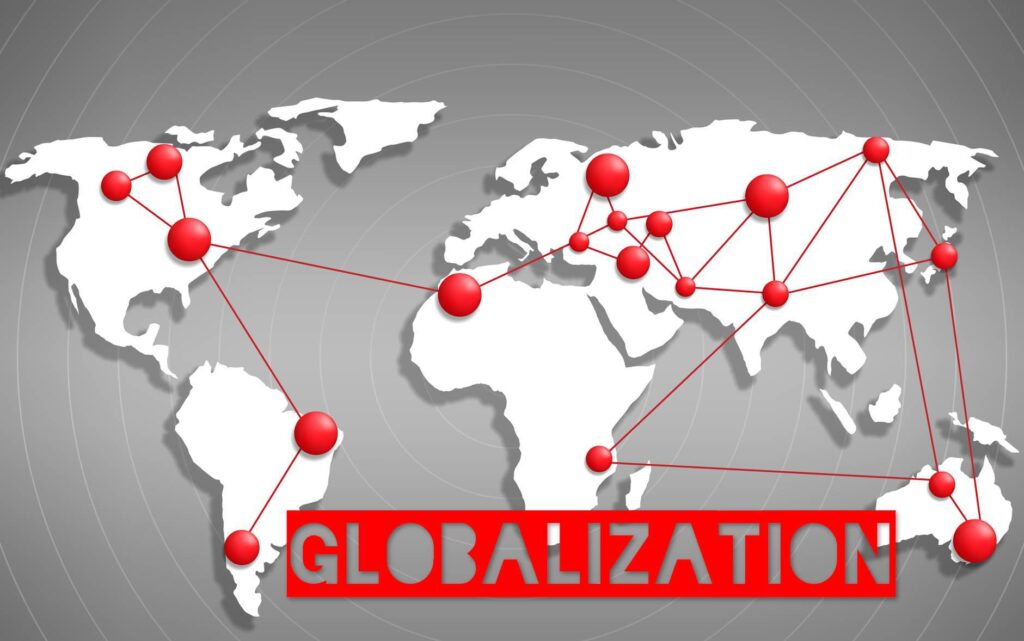 The future of globalization remains a bit of a mystery. Despite overwhelming evidence that globalization has improved the world’s economic fortunes — and raised millions out of poverty — it has been aggressively attacked by many in the west as jobs and manufacturing moved overseas. The anger of displaced workers is understandable. Consequences of this anger have included rising protectionism and growing xenophobia. Authoritarian regimes have cracked down on independent media and, thanks to unfolding international events, the Russian and Chinese economies are beginning to separate from the rest of the world order in unfortunate ways. Chris Giles (@ChrisGiles_), Economics Editor at the Financial Times, writes, “Policymakers, economists and investors fear that globalization may have peaked after 30 years of growth. Some even predict that trading volumes may suffer a sharp reversal as disputes between leading nations intensify after Russia’s invasion of Ukraine and as companies strive to build more resilience into global supply chains.”[1] Of course, not all politicians, economists, and investors fear globalization’s erosion; some celebrate it. So, where does globalization go from here?

Marcin Fic, Vice President for Supply Chain Solutions at Flex, notes, “The international web of interdependence in the world’s economies and cultures, known as globalization, has been driving economic growth for decades, spurred by low shipping costs, free trade, and labor arbitrage. Globalization has established worldwide economies, helped China jump to the global stage, increased offshore manufacturing and driven international cash flow since the early 1990s. Today, though, with higher wages, increasing shipping costs, and shifting consumer needs, we’re experiencing a new era where global trade is slowing down and occurring on increasingly regional terms.”[2] Rather than label this situation as deglobalization, Fic calls its “slowbalization.” He explains, “The term ‘slowbalization’ was coined to describe the shrinking or slowing of international trade, investments, loans and supply chains, marking a distinct shift away from an influential era of global manufacturing.”

Giles, however, reports that some pundits see the last gasps of ailing system. “Geopolitical pressures,” he writes, “are expected to generate a large shift towards deglobalization, with the boost to trade as countries recover from the pandemic being seen as a last hurrah before fresh barriers are erected.” Financial commentator Philip Stephens (@philipstephens) also sees geopolitics reversing earlier globalization trends. He writes, “Geopolitics and globalization used to run on parallel tracks. Promises after the fall of the Berlin Wall that history had been consigned to the past may have been hyperbolic, but the defeat of communism surely had made the world safe for liberal democracy. Just-in-time production lines heedless of state borders promised likewise an unmatched recipe for prosperity. Now, comfortable coexistence between the preoccupations of politics and the interests of businesses has been replaced by frequent collision.”[3]

Howard Marks (@HowardMarksBook), co-founder and co-chair of Oaktree Capital Management, sees deglobalization as inevitable, even though he admits that globalization has, overall, been beneficial to much of the world. He notes, “Many industries moved a significant percentage of their production offshore, bringing down costs by using cheaper labor. This process boosted economic growth in the emerging nations where the work was done, increased savings and competitiveness for manufacturers and importers, and provided low-priced goods to consumers.”[4] On the downside, he reports, “Offshoring also led to the elimination of millions of US jobs and the hollowing out of the manufacturing regions and middle class of our country. Moreover, the supply chain disruption that has resulted from the Covid-19 pandemic has revealed the vulnerabilities created by offshoring. Supply has been unable to keep pace with elevated demand as economies have recovered. … The recognition of these negative aspects of globalization is causing the pendulum of companies’ and countries’ behavior to swing back toward local sourcing.” He concludes, “[Deglobalization will] increase the competitiveness of onshore producers and the number of domestic manufacturing jobs, and create investment opportunities in the transition. For how long will the pendulum swing away from globalization and towards onshoring? The answer depends on how the current situations are resolved and on which force wins: the need for dependability and security or the desire for cheap sourcing. After many decades of globalization and cost minimization, I think we are about to find investment opportunities in the swing towards reliable supply.”

Giles writes, “The challenge for globalization advocates is to determine the scale of the potential reversal, including the impact on competition, supply chains and the hit to developing economies.” Economist Megan Greene (@economistmeg), a senior fellow at Harvard Kennedy School, believes it premature to write globalization’s eulogy. She explains, “When the Covid-19 pandemic hit, as China locked down and countries around the world struggled to source personal protective equipment, many wrote an obituary for China-focused globalization. It seemed a logical view, given the economic nationalism of Donald Trump and Brexit and the US-China trade war. But there is little evidence that the pandemic has prompted companies to abandon China en masse or sparked deglobalization.”[5] She admits that current data may provide a false picture, since altering supply chains takes time. “Why hasn’t deglobalization taken hold?” she asks. Her answer: “Companies make decisions about production based on hard calculations about their bottom line over the medium- to long-term. Building a new supply infrastructure takes considerable time and resources. … Costs are going up in China and trade tensions with the US persist. And we don’t know how the geopolitics of China will play out. What is more likely than deglobalization is the developing ‘China Plus One’ strategy: keep factories in China but hedge your bets with suppliers elsewhere.”

Despite current concerns about inflation, Harold James, a professor of history and international affairs at Princeton University, is also skeptical that globalization is going away. He writes, “Food and fuel price rises are likely to spark discontent, protests and even revolutions across the world. Does this amount to an end of globalization, pushing national inflation levels even higher? … To understand why our future is not necessarily so bleak, and why globalization may not be ending because of the pandemic or war in Ukraine, look at the decisive turning points of the past. They were inflationary, but they drove the world to more not less globalization.”[6] He points to two periods of increased globalization. First, the period from the mid-nineteenth century to the beginning of the First World War. Second, the period beginning in the 1970s. He concludes, “It was inflation that helped create a new policy environment in the mid-19th century and in the 1970s. As the economic and political costs of inflation became more obvious and more damaging, it appeared more attractive to look for ways to calm inflationary pressures. For sure, the disinflationary cure — more globalization as well as more effective government — was temporarily uncomfortable. But it drove the world to seize technical and geographical opportunities once ignored or neglected. There is, in short, a post-conflict future to which we might look forward with some degree of hope.”

For years, I’ve argued that globalization has been moving towards regionalization. Shortening supply lines makes both economic and environmental sense. Fic explains, “A new focus on regional manufacturing and ‘post-globalization’ is changing the world. This post-globalization occurs for a number of reasons, namely technological developments that are bringing production and manufacturing closer to the final destination of goods — the end user; a shift towards services over products; the expense of global expansion by multinational corporations; and China’s decreasing reliance on foreign parts. The market is also being affected by increased customer demand for customized products, expectations for faster product delivery and a surge in raw material costs.”

Christopher S. Tang (@christangucla), a University Distinguished Professor and Edward W. Carter chair in business administration at the UCLA Anderson School of Management, is a proponent of regionalization. He explains, “Decades of outsourcing and offshoring have hollowed out the U.S. manufacturing sector. Building domestic supply chains in the U.S. can be time-consuming and cost-ineffective. … To develop financially sustainable and operational resilient supply chains in the U.S., I have two suggestions. First, the U.S. government must strategically work with the private sector to develop cost-effective regional supply chains by leveraging the USMCA, the updated version of NAFTA. A U.S. firm can conduct more labor-intensive operations in Mexico, tariff-free and with lower labor costs, then perform final assembly operations in the U.S. The U.S. government can further encourage this regional development by offering expedited processes for cross-border customer clearance. … To ensure financial sustainability, such regional supply chains must be agile and flexible. … Second, to expedite the process of building regional supply chains, the Biden administration must cut red tape, reforming and simplifying the Federal Acquisition Regulations (FAR), a set of intricate regulatory procedures that will guide much of the spending of the $1.2 trillion infrastructure bill. … Cutting red tape can breed success.”[7] He concludes, “The current crisis exposed the vulnerability of global supply chains, but it presents an excellent opportunity for developing regional supply chains that are more resilient. It’s about time.”

Regionalization doesn’t necessarily result in a world ruled by competing hegemons. Businesses should make supply chain decisions based primarily on economic and sustainability factors. As Marla Keene (@MarlaKeene9), a technology writer for AX Control, Inc, explains, “Many factors influence whether to localize or globalize a supply chain. Globalization has been the standard for many years, but it may not be the right answer going forward for some. Costs, demand, and long-term goals, as always, should guide your decisions.”[8]

Despite the naysayers, globalization in some form is likely to survive. The Economist explains, “Resilience comes not from autarky but from diverse sources of supply and constant private-sector adaptation to shocks. Over time, global firms will adjust to even long-term threats, including tension between America and China and the effects of climate change, by gradually altering where they make fresh investments. This is a perilous moment for trade. Just as globalization begets openness, so protection and subsidies in one country spread to the next. Globalization is the work of decades. Do not let it run aground.”[9]