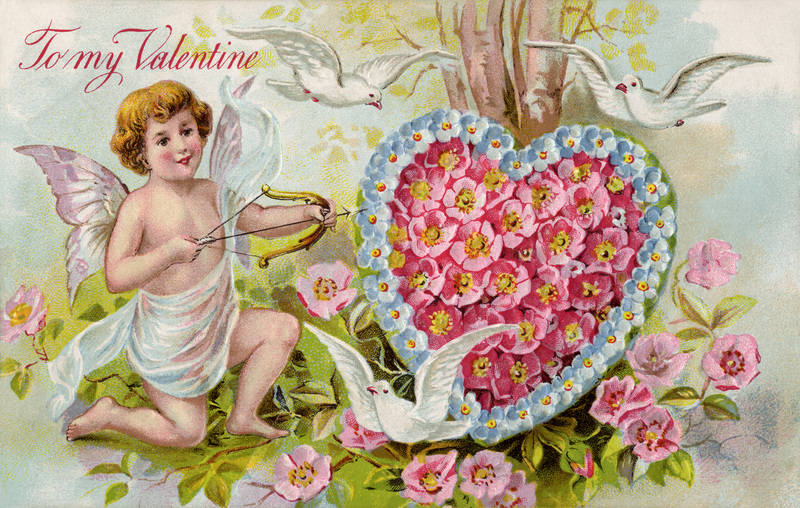 Confectioners, card companies, and flower shops love holidays. Valentine’s Day is no exception. The day, of course, is named in honor of a Christian saint. According to Wikipedia, “The day was first associated with romantic love in the circle of Geoffrey Chaucer in the High Middle Ages, when the tradition of courtly love flourished. In 18th-century England, it evolved into an occasion in which lovers expressed their love for each other by presenting flowers, offering confectionery, and sending greeting cards (known as ‘valentines’).” When I think about Valentine’s Day, I picture a suitor on the front step of his sweetheart’s home carrying a bunch of flowers, a box of chocolates, and a card. In that scenario, the suitor is the “last mile” solution for the products he is personally delivering to the ultimate consumer — his sweetheart. At that moment, neither the suitor nor his sweetheart is thinking about the supply chain that was involved in getting those gifts to the store and eventually into their hands. The supply chain story for some of those gifts begins overseas.

Valentine’s Day is especially important to florists. Marty Lariviere (@TheOpsRoom), a professor at the Kellogg School of Management, reports “florists get 40% of their annual revenue from the holiday, so getting the right blooms to the right locations is paramount.”[1] Valentine’s Day is the number one holiday for flower sales in the United States. Approximately one-third of all U.S. consumers will purchase flowers as a gift on Valentine’s Day. Ninety percent of those flowers will have been grown on farms in Latin America. Most flowers come from Colombia, Ecuador, Guatemala, and Costa Rica. In order to extend their shelf life, flowers should be transported in containers that can maintain a temperature between 34° and 36° Fahrenheit. Approximately 200 million flowers will be sold on Valentine’s Day with over half of them (approximately 110 million) being red roses. Daniel Marin reports, “The logistics of transporting flowers is not an easy task as it requires expert coordination, planning, temperature controlled vehicles and know-how to ensure that the time-sensitive nature of flowers is preserved from the farm where it was grown and cut to the door of the lucky recipient.”[2]

Valentine’s Day isn’t the top holiday for candy sales. It ranks fourth behind Halloween, Easter, and Christmas. Candy expert Elizabeth LaBau (@IAmSugarHero) insists, “Valentine’s Day and candy are a match made in heaven.”[3] For younger consumers, those little candy hearts are a favorite. LaBau reports that over 8 billion of those hearts are produced each year. That’s enough candy hearts to pave a small path 20-hearts across from Rome, Italy, to Valentine, Arizona. For adults, however, the candy of choice is chocolate. LaBau writes, “More than 36 million heart-shaped boxes of chocolate will be sold for Valentine’s Day. … As an elixir for love, chocolate has been believed throughout history to bring smiles to the broken-hearted and to prompt amorous feelings in both men and women. It is believed that Madame Du Barry served it to all her suitors; Casanova consumed chocolate instead of champagne to induce romance; and Montezuma, the king of the ancient Aztecs, believed chocolate would make him virile.” Analysts at Business Case Studies note, “As with many other manufacturing industries, creating chocolate products involves a chain of production with many links.”[4] They continue:

“It starts with cocoa bean growers and ends when retailers sell us the final product. … At each stage of the chain there will be additional services that help producers to operate more effectively. These include banking and insurance services, packaging firms, transport specialists. … It is clear that in the course of converting cocoa beans into cocoa butter the raw material will be traded several times.”

Researchers at Cargill add, “The supply chain that lies behind the production of chocolate, one of the world’s favorite confections, spans the globe and is shaped by powerful forces of supply and demand. The changing habits of customers define the direction of product innovation, and addressing the pressures on farmers growing cocoa beans is central to maintaining a reliable supply of raw ingredients. Add to this the volatility of global food prices plus the concerns over food security, and the story of chocolate becomes a complex one.”[5]

Cathy Hayward writes, “When Saint Valentine, a Roman priest, performed secret marriages against the wishes of Emperor Claudius II, who believed single men made better soldiers, he was aware of the likely consequences. The night before his resulting execution, on 14 February 270AD, Valentine sent a letter to his lover signed, ‘From your Valentine’. But he had no idea of the effect those three words — now the most popular message on the millions of Valentine’s Day cards sent every year — would have.”[6] The historical veracity of Hayward’s account of how Valentine’s Day began might be questioned, but there is no doubt that cards are a big part of modern Valentine’s Day celebrations. When it comes to cards, Valentine’s Day ranks second behind Christmas. In the United States, the first mass commercially produced Valentine’s Day cards were sold in the 1840s. Over 150 million cards are expected to be exchanged this year. For most cards, the supply chain begins in the forest. Like the supply chains of other gifts mentioned above, the journey from tree to greeting card has many steps. One growing supply chain concern (no pun intended), involves the trees with which the process begins. James Murray (@James_BG) writes, “All lovers know there is a lot to remember in the run up to Valentine’s Day. Have you got a card, have you got a gift, have you booked a suitably over-priced restaurant? Now another crucial question must be added to the Valentine’s checklist for the love-struck and their retailers alike — have you ensured the supply chain for your gift is environmentally sustainable?”[7] Beatrix Richards, head of corporate stewardship for timber and seafood at WWF, asserts, “The true cost of our Valentine’s cards could be far greater than the price on the wrapping. They may be contributing to the further loss of some of the most valuable forests in the world. Companies that rely on forests for their raw materials should scrutinise their supply chains and reassure customers that they are buying cards made from recycled or sustainable materials.”[8]

As romance fills the air this Valentine’s Day, give a little love to all of the people in the various supply chains who helped create the gifts you exchange and the meals you consume. They help make the magic happen.