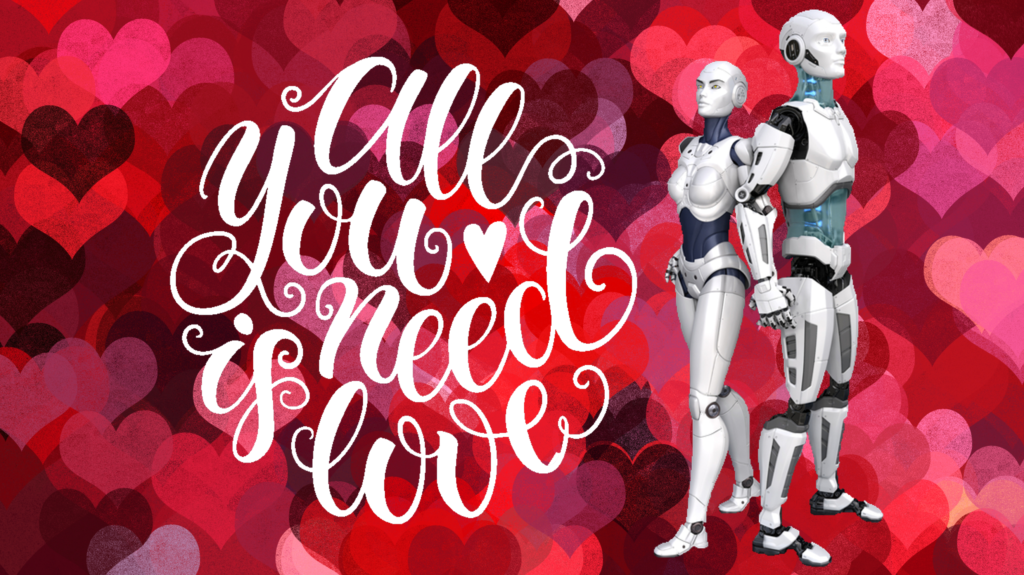 Valentine’s Day is about celebrating of love. According to popular lore, however, the celebration’s origins are found in a story about forbidden love. According to the BBC, “The popular belief about St. Valentine is that he was a priest from Rome in the third century AD. Emperor Claudius II had banned marriage because he thought married men were bad soldiers. Valentine felt this was unfair, so he broke the rules and arranged marriages in secret. When Claudius found out, Valentine was thrown in jail and sentenced to death. There, he fell in love with the jailer’s daughter and when he was taken to be killed on 14 February he sent her a love letter signed ‘from your Valentine’.”[1] Forbidden love has been a hot topic down through the ages, which is what made William Shakespeare’s “Romeo and Juliet” an enduring story — and whose theme is carried more recently in “West Side Story.” Another form of forbidden love has been explored by Hollywood — love between an artificial intelligence being and a human being.

Although exploring an AI/human relationship sounds modern, Caroline Baron (@carolynebaron), Marketing manager at Julie Desk, reminds us, “In 1927, Fritz Lang imagined a romance between the lead actor of Metropolis and the robot Maria!”[2] She adds, “More recently, the story has been repeated in movies like HER (2013) or Ex-Machina (2015).” Baron then asks the question, “What does it take to go from fiction to reality?” That question begs two others: Can humans really love an AI being? Can an AI being love you back?

Raya Bidshahri (@raya_bid), Founder and CEO at School of Humanity, writes, “As thinking machines become more integrated into our lives, we must expect a transformation in how we define what it means to be conscious; what it means to live and to die; and ultimately, what it means to love a non-human being.”[3] Before you dismiss such a notion as ridiculous, Paul Teich (@paulrteich), a Principal Analyst with Liftr, suggests you participate in a thought experiment. He writes, “This Valentine’s Day, do a little thought experiment: think of the day in terms of the people whose emotions you will try to manipulate and who will, in turn, try to manipulate your emotions. We think of emotions as a purely human quality, person-to-person. And yet people also think of their pets, products and other inanimate objects they buy as having human emotional values, such as warmth, goodness, coldness, and even evil. What if our manufactured products could sense and respond to our emotions in a very human way?”[4]

Can humans really love an AI being?

Two Australian academics from the Queensland University of Technology, Kate Letheren (@DrKateL), a Postdoctoral research fellow, and Jonathan Roberts (@jonnieroberts), a Professor in Robotics, believe AI/Human relationships are a definite possibility. They write, “Imagine it’s Valentine’s Day and you’re sitting in a restaurant across the table from your significant other, about to start a romantic dinner. As you gaze into each other’s eyes, you wonder how it can possibly be true that as well as not eating, your sweetheart does not — cannot — love you. Impossible, you think, as you squeeze its synthetic hand. Could this be the future of Valentine’s Day for some? Recent opinion indicates that yes, we might just fall in love with our robot companions one day.”[5] For example, they point to a robot named “Pepper” that was specifically designed to provoke and respond to human emotions. Watch Pepper wake up in the following video.

Letheren and Roberts admit human/AI relationships probably face a bumpy road. They explain, “Human-robot relationships could be challenging for society to accept, and there may be repercussions. It would not be the first time in history that people have fallen in love in a way that society at the time deemed ‘inappropriate’. The advent of robot Valentines may also have a harmful effect on human relationships. Initially, there is likely to be a heavy stigma attached to robot relationships, perhaps leading to discrimination, or even exclusion from some aspects of society (in some cases, the isolation may even be self-imposed). Friends and family may react negatively, to say nothing of human husbands or wives who discover their human partner is cheating on them with a robot.”

Can an AI being love you back?

Bidshahri asks, “How will we know if an AI has the true inner experience of consciousness or if it has simply been programmed to create the illusion of consciousness?” Even if some sort of machine consciousness does eventually exist, will it be capable of what we call love? Bidshahri writes, “To say that a non-biological being isn’t capable of loving is to devalue it. Why should the source of one’s consciousness determine its validity? Why should a non-biological individual be any less worthy of being loved? Why does the functional origin of the emotions of love matter if the experience feels the same?” Letheren and Roberts believe that embedding AI with real emotions is unlikely and, possibly, immoral. They explain, “Allowing robots to experience pain or emotions raises moral questions for the well-being of robots as well as humans.”

Letheren and Roberts continue, “So if ‘real’ emotions are out of the question, is it moral to program robots with simulated emotional intelligence? This might have either positive or negative consequences for the mental health of the human partner. Would the simulated social support compensate for knowing that none of the experience was real or requited? … But would any of this really matter to you and your robot Valentine, or would love indeed conquer all?” Teich doesn’t think it will matter. He writes, “We will think of our AI-based products as human, but will these products have a heart? Not in the literal sense, but in the way we interact and view these products, they will have just as much heart as others that impact our lives today.”

David Tuffley (@DavidTuffley), a Senior Lecturer in Applied Ethics & Cyber Security at Griffith University, notes that many individuals already let AI algorithms match them with potential partners. He adds, “With AI-systems as matchmakers, in the coming decades it may become common to date a personalized avatar.”[6] Although much of the discussion above was about falling in love with physical robots, Tuffley believes a more likely scenario involves virtual reality. He explains:

“Where there is AI there will often be its technological sibling, virtual reality (VR). As both evolve simultaneously, we’ll likely see versions of VR in which would-be daters can ‘practice’ in simulated environments to avoid slipping up on a real date. This isn’t a far stretch considering ‘virtual girlfriends’, which are supposed to help people practice dating, have already existed for some years and are maturing as a technology. A growing number of offerings point to a significant degree of interest in them. With enough user data, future AI could eventually create a fully-customized partner for you in virtual reality — one that checks all your ‘boxes’. Controversially, the next step would be to experience an avatar as a physical entity.”

Bidshahri notes, “Many [experts] predict that one day we will merge with powerful machines, and we ourselves may become artificially intelligent. In such a world, where our own existence will be largely non-biological, it is only inevitable that we eventually accept being in love with entirely non-biological beings.” Maybe the Beatles were correct: “All you need is love.”

The world is changing and AI/human relationships are likely going to be a part of the future landscape. Tuffley notes, “The debate on digital and robotic ‘love’ is highly polarized, much like most major debates in the history of technology. Usually, consensus is reached somewhere in the middle. But in this debate, it seems the technology is advancing faster than we are approaching a consensus.” Technology has always advanced faster than it can regulated; however, according to Tuffley, things could be getting out of control. He adds, “Generally, the most constructive relationship a person can have with technology is one in which the person is in control, and the technology helps enhance their experiences. For technology to be in control is dehumanizing. Humans have leveraged new technologies for millennia. Just as we learned how to use fire without burning down cities, so too we will have to learn the risks and rewards accompanying future tech.” Baron concludes, “On this lovely romantic day, let’s finish on a positive note. … Whether you are real or artificial, we wish you a Happy Valentine’s Day!”

Footnotes
[1] Staff, “What is Valentine’s Day and how did it start?” BBC, 10 February 2017.
[2] Caroline Baron, “Could You Fall in Love With an Artificial Intelligence?” Julie Desk Blog, 14 February 2017 (out of print).
[3] Raya Bidshahri, “How AI Will Redefine Love,” Singularity Hub, 5 August 2016.
[4] Paul Teich, “Artificial Intelligence Will Have A Heart,” Forbes, 11 February 2016.
[5] Kate Letheren and Jonathan Roberts, “My Robot Valentine: Could You Fall in Love with a Robot?” The Conversation, 10 February 2016.
[6] David Tuffley, “Love in the time of algorithms: would you let artificial intelligence choose your partner?” The Conversation, 17 January 2021. 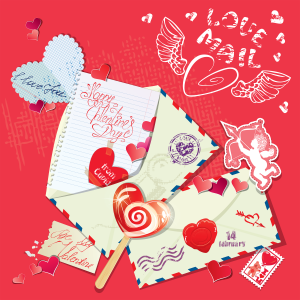 There are several different stories about the origins of Valentine’s Day (or St. Valentine’s Day); but, the story I prefer involves love and marriage. According 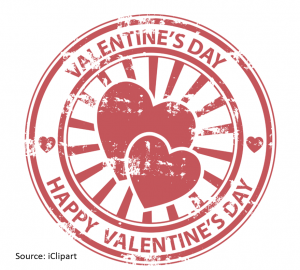 It wouldn’t be Valentine’s Day without Logistics

Today is Valentine’s Day. Traditionally it is a day to exchange cards expressing deep and abiding affection for loved ones. According to analysts from Fronetics,