Home » Education » The Usefulness of Useless Knowledge in an Innovative World 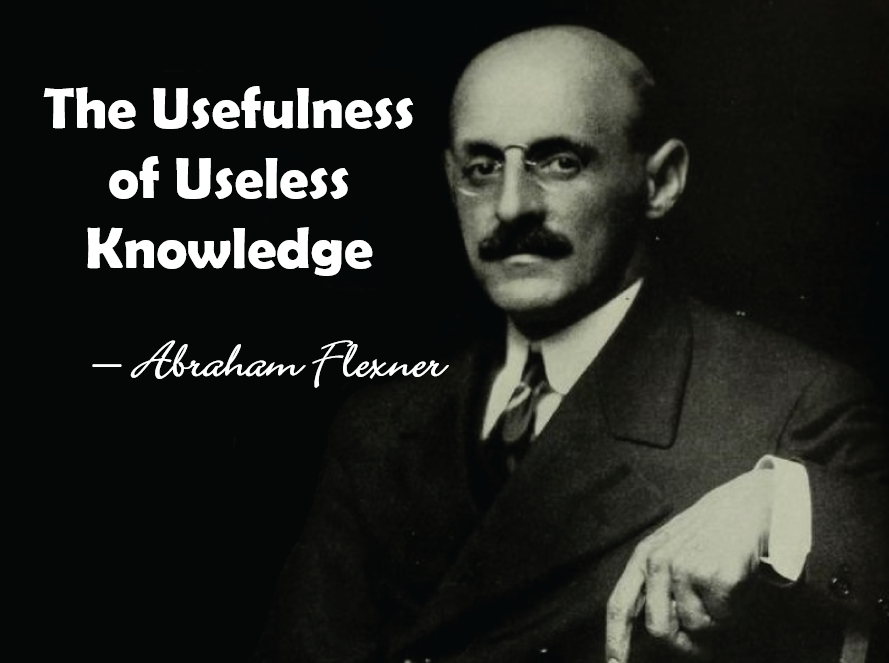 The Usefulness of Useless Knowledge in an Innovative World

The world likes to make a distinction between basic and applied knowledge. In recent years, there seems to be more emphasis placed on applied knowledge than basic knowledge. In the United States, one reason for that trend is that the Federal Government is spending less on basic research. Jeffrey Mervis (@jeffmervis) reports, “For the first time in the post–World War II era, the federal government no longer funds a majority of the basic research carried out in the United States. Data from ongoing surveys by the National Science Foundation (NSF) show that federal agencies provided only 44% of the $86 billion spent on basic research in 2015. The federal share, which topped 70% throughout the 1960s and ’70s, stood at 61% as recently as 2004 before falling below 50% in 2013.”[1] If Dr. Abraham Flexner, the first Director of the Institute for Advanced Study, was still alive, he would be disappointed in this turn of events. In a 1939 essay, Flexner argued that curious people seeking answers to questions that puzzled them were the giants upon whose shoulders innovators have always stood. He called the answers these intellectual giants were pursing “useless knowledge.” Why was this knowledge useless? Because, Flexner argued, those pursuing such knowledge had “no concern about the utility of their work” and had “no practical objective” in mind.[2]

It’s difficult to know exactly how much is being spent in the pursuit of useless knowledge (aka basic research) because research and development (R&D) budgets are often aggregated. Analysts from the Institute for Statistics at the United Nations Educational, Scientific, and Cultural Organization ( UNESCO ) explain, “Expenditures for research and development are current and capital expenditures (both public and private) on creative work undertaken systematically to increase knowledge, including knowledge of humanity, culture, and society, and the use of knowledge for new applications. R&D covers basic research, applied research, and experimental development.”[3] They also note, “Studies have found that every dollar invested in R&D generates nearly two dollars in return. While the rate will vary, R&D is an important driver of economic growth.”[4] The World Bank adds, “Expenditure on research and development (R&D) is a key indicator of government and private sector efforts to obtain competitive advantage in science and technology.”[5] There is good news to be found. Mervis points out there has been “a significant rise in corporate funding of fundamental science since 2012.”

The Usefulness of Useless Knowledge

In his essay, Flexner offered some examples of how basic research (i.e., the pursuit of useless knowledge) resulted in practical applications that changed the world. He wrote about the emergence of electricity, which he stated is “a discovery of the most immediate and far-reaching practical use.” He didn’t point, however, to Nikola Tesla or Thomas Edison, who made the practical use of electricity a reality. Instead, he wrote about Michael Faraday, son of blacksmith and apprentice bookbinder, who became a great scientist because he was curious about chemistry and eventually about electricity. Faraday built upon the discoveries of Hans Christian Ørsted, a Danish physicist and chemist who discovered that electric currents create magnetic fields, and André-Marie Ampère, a French mathematician and physicist who is considered the father of electrodynamics, and William Hyde Wollaston, an English chemist and physicist. Flexner explained how Faraday “cleared away the difficulties which they had left unsolved and by 1841 had succeeded in the task of induction of the electric current.”

He also wrote about the development of wireless communication (a big deal in the early part of the 20th century). He didn’t give the bulk of the credit to Guglielmo Marconi. Rather he wrote about the “useless knowledge” discovered by “Professor Clerk Maxwell, who in 1865 carried out certain abstruse and remote calculations in the field of magnetism and electricity” and about the work of Heinrich Hertz who detected and demonstrated “electromagnetic waves which are the carriers of wireless signals.” He asked, “What did Marconi invent?” His answer, “Merely the last technical detail, mainly the now obsolete receiving device called coherer, almost universally discarded.” He continued, “Who were the useful men? Not Marconi, but Clerk Maxwell and Heinrich Hertz. Hertz and Maxwell were geniuses without thought of use. Marconi was a clever inventor with no thought but use.” That judgment may sound harsh; but, Flexner was trying to make a point. He had no quarrel about the place inventors and innovators have in the world. Flexner readily admitted, “We live in a world that would be helpless without electricity.” He just wanted to make sure people understood that practical applications are always built upon knowledge discovered by people who had no interest in how new knowledge could be applied. He explained:

“I am not for a moment suggesting that everything that goes in laboratories will ultimately turn to some unexpected practical use or that an ultimate practical use is its actual justification. Much more am I pleading for the abolition of the word ‘use,’ and for the freeing of the human spirit. … To be sure, we shall thus waste some precious dollars. But what is infinitely more important is that we shall be striking the shackles off the human mind and setting it free for the adventures which in our own day have, on the one hand, taken Hale and Rutherford and Einstein and their peers millions upon millions of miles into the uttermost realms of space and, on the other hand, loosed the boundless energy imprisoned in the atom. What Rutherford and others like Bohr and Millikan have done out of sheer curiosity in the effort to understand the construction of the atom has released forces which may transform human life.”

He went on to write about how modern medicine benefited from useless knowledge. “All of the waste that could be summed up in developing the science of bacteriology is as nothing compared to the advantages which have accrued from the discoveries of Pasteur, Koch, Ehrlich, Theobald Smith, and scores of others — advantages that could never have accrued if the idea of possible use had permeated their minds.”

Flexner concluded, “With the rapid accumulation of ‘useless’ or theoretic knowledge, a situation has been created in which it has become increasingly possible to attack practical problems in a scientific spirit. Not only inventors, but ‘pure’ scientists have indulged in this sport. I have mentioned Marconi, an inventor, who, while a benefactor to the human race, as a matter of fact merely ‘picked men’s brains.’ Edison belongs to the same category. … It becomes obvious that one must be wary in attributing scientific discovery wholly to any one person. Almost every discovery has a long and precarious history. … We make ourselves no promises, but we cherish the hope that the unobstructed pursuit of useless knowledge will prove to have consequences in the future as in the past.” When Flexner died at age 92, his obituary was carried on the front page of the New York Times. An accompanying editorial concluded, “No other American of his time has contributed more to the welfare of this country and of humanity in general.” All of us who make a living in the commercial sector, owe a debt of gratitude to curious men and women who pursued answered to questions simply because they were curious and enjoyed a life-long love affair with learning.