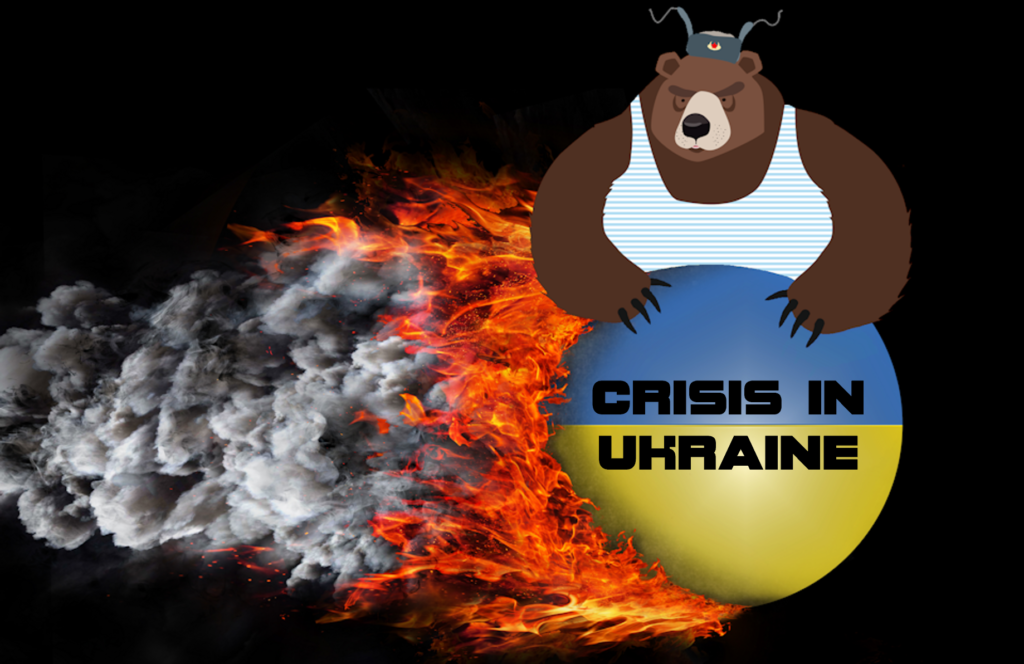 Ukraine and the Supply Chain

The world is rightfully concerned about Russia’s ruthless and unprovoked invasion of Ukraine. Not only is Russian President Vladimir Putin’s attack an assault on democracy, it is an assault on world order. In a television speech that precipitated the invasion, Putin warned, “To anyone who would consider interfering from the outside — if you do, you will face consequences greater than any you have faced in history.” Some experts see that as a not-so-veiled threat of nuclear retaliation; however, Putin can disrupt national economies and create global chaos in other ways (both real and virtual). Anyone who believes that the Ukraine invasion will have little impact beyond the Crimea region is in for a shock. Bloomberg reports, “The crisis has driven oil prices toward $100 a barrel and sent tremors through other commodity markets too, threatening another wave of price pressures on top of already-high pandemic inflation. Russia is a commodities powerhouse and a key supplier of energy to Europe. Western nations are caught between the desire for harsh sanctions to deter Putin, and concern that they’ll suffer blowback themselves.”[1]

Victor Meyer, a former United States Navy SEAL and current COO of risk intelligence company Supply Wisdom, predicts, “There will be at least hybrid warfare going on in the Ukraine.”[2] According to tech journalist Dennis Scimeca (@DennisScimeca), “This prediction has borne out. Hybrid warfare, the strategy of using means other than military force to wage war on a nation, includes economic pressure to destabilize economies. The Wall Street Journal and New York Times are reporting that Ukrainian banks and infrastructure agencies have been suffering through waves of cyber attacks in recent days. Defense and interior ministry sites suffered interruptions and delays.”[3] Ciaran Martin, the founding chief executive of the National Cyber Security Center, the defensive arm of GCHQ, Britain’s signals-intelligence agency, notes, “Ukraine, sadly, has been Russia’s cyber playground for years.”[4]

The Economist staff observes, “Western officials worry about the spillover of any cyber-conflict in Ukraine, whether accidental or deliberate. In 2017 the ‘NotPetya’ cyber-attack on Ukraine, which irreversibly encrypted data on computers, caused $10bn-worth of damage around the world (it was widely blamed on Russia).”[5] Tech journalist Nicolás Rivero (@NicolasFuRivero) believes collateral damage is the most likely impact to be felt outside of Ukraine. He explains, “Collateral damage from a wave of cyberattacks targeting Ukrainian government websites may disrupt shipping lines and logistics firms, perhaps reigniting the worst of last year’s supply chain chaos. … History suggests Russian hacks will not stay within the borders of the former Soviet republic.”[6]

Samuel Charap, a former U.S. State Department adviser now at the Rand Corporation, told the Economist, “If we’re talking about Russia being engaged in the most significant military operation since the second world war, in what it considers an existential struggle, and at the same time, the West — with every moral justification — decides to cripple the Russian economy, it’s hard for me to believe that they’re going to take that sitting down. … You could imagine the sort of asymmetrical response — shutting down some major Western banks for a couple of days.”[7] In other words, the Ukraine conflict could turn into a global cyber-war. Such an escalation, however, would place Russia, and the world, in a very dangerous place.

Ukraine Conflict and the Supply Chain

In addition to cyber-attacks, the conflict in Ukraine could affect the supply chain in other ways. The Economist notes, “[The war] will result in the isolation of the world’s 11th-largest economy and one of its largest commodity producers. The immediate global implications will be higher inflation, lower growth and some disruption to financial markets as deeper sanctions take hold. The longer-term fallout will be a further debilitation of the system of globalized supply chains and integrated financial markets that has dominated the world economy since the Soviet Union collapsed in 1991.”[8] The magazine adds, “The supply of commodities could be damaged in one of two ways. Their delivery might be disrupted if physical infrastructure such as pipelines or Black Sea ports are destroyed. Alternatively, deeper sanctions on Russia’s commodity complex could prevent Western customers from buying from it. Up until now both sides have been wary about weaponizing the trade in energy and commodities, which continued throughout the cold war.”

Experts point to the disruption of energy supplies as the most immediate impact of the war. Per Hong (@Per_Hong), a partner in Kearney’s Strategic Operations practice, reports, “Russia is the world’s second-largest oil exporter after Saudi Arabia, producing more than 5 million barrels of crude per day, nearly half of which is supplied to European countries. Russia also provides over a third of the European Union’s natural gas. A disruption to these supplies could send energy prices through the proverbial roof.”[9] He adds, “In addition, Russia controls roughly 10 percent of global copper reserves and is a major producer of aluminum, nickel, platinum, and other precious metals that are integral to the manufacture of everything from kitchen appliances to laptops to mobile phones, while the chip industry relies heavily on Ukrainian-sourced neon. Supply disruptions in these and other key commodities will trigger price increases for economically vital products such as batteries, and hinder the manufacture of semiconductors, jet engines, automobiles, and some medicines.”

The agricultural sector will also be impacted by the conflict. Ukraine has rich, black soil and is considered a breadbasket for Europe. Journalists Patricia Cohen (@PatcohenNYT) and Jack Ewing (@JackEwingNYT) report, “Russia is the world’s largest supplier of wheat, and together with Ukraine, accounts for nearly a quarter of total global exports. For some countries, the dependence is much greater. That flow of grain makes up more than 70 percent of Egypt and Turkey’s total wheat imports.”[10] Hong adds, “The agricultural sector will be hit hard, as our interconnected global supply chains are sensitive to even small disruptions in one region. Ukraine is among the world’s largest exporters of corn, barley, and rye; Russia is the world’s top wheat exporter. Food inflation will accelerate significantly with fresh price shocks stemming from increased energy costs, seizures of agricultural areas, and the sweeping economic sanctions promised by Western governments.”

A final consideration for the global supply chain is how sanctions will affect corporate environmental, social, and governance (ESG) policies. Companies doing business with Russia could face fines and reputational damage if they fail to comply with the sanctions. Journalists Alistair MacDonald (@macdonaldajm) and Nick Kostov (@Nick_Kostov) explain, “Western companies with operations in Russia and Ukraine are girding for the potential impact of fresh sanctions after Russian President Vladimir Putin announced a military operation in Ukraine’s eastern Donbas region. Big oil companies — including BP PLC, Exxon Mobil Corp. and Shell PLC — all have substantial investments in Russia, as do brewing giant Carlsberg A/S and auto maker Renault SA.”[11] They are not alone. A number of transnational companies have ties to Russia.

While some people believe Putin to be a madman, he is not. He is a cold and calculating dictator with an immense ego who wants to expand his empire by absorbing geographical areas primarily inhabited by ethnic Russians. To protect that empire, he wants to replace western-friendly governments with administrations more friendly to Moscow. Up may recall that over a dozen years ago, he threatened Georgia in the same way he is threatening Ukraine. At that time the late Charles Krauthammer wrote:

“His objectives are clear. They go beyond detaching South Ossetia and Abkhazia from Georgia and absorbing them into Russia. They go beyond destroying the Georgian army, leaving the country at Russia’s mercy. The real objective is the Finlandization of Georgia. … The Finlandization of Georgia would give Russia control of the Baku-Tbilisi-Ceyhan pipeline, which is the only significant westbound route for Caspian Sea oil and gas that does not go through Russia. Pipelines are the economic lifelines of such former Soviet republics as Kazakhstan and Azerbaijan that live off energy exports. Moscow would become master of the Caspian basin. Subduing Georgia has an additional effect. It warns Russia’s former Baltic and East European satellites what happens if you get too close to the West. It is the first step to reestablishing Russian hegemony in the region.”[12]

In the end, Putin’s egomania could hurt Russia a lot. Cohen and Ewing note, “Unlike China, which is a manufacturing powerhouse and intimately woven into intricate supply chains, Russia is a minor player in the global economy.” As noted above, minerals, oil, and natural gas are its primary contributions to the global economy. Without access to global markets for those commodities, the Russian economy could collapse. As Cohen and Ewing note, the more important player to watch in this scenario is China, who has its eye on Taiwan and territory in the South China Sea. If China invades Taiwan, the global supply chain would feel tectonic shocks, not just mild tremors. The world’s reaction to the Ukraine crisis could determine how China acts in the future.

Although this article focused on supply chain repercussions of Russia’s invasion, we cannot forget the enormous potential for human suffering. The Washington Post reports that the invasion “could leave up to 50,000 civilians killed or wounded, decapitate the government in Kyiv … and launch a humanitarian crisis with up to 5 million refugees fleeing the resulting chaos.”[13] That’s a steep price to pay for one man’s ego. As Ryan Hass (@ryanl_hass), a Brookings scholar on China and Asia, observes, “President Vladimir Putin is the sole author of the crisis unfolding in Ukraine. Russia is the aggressor and aggravator of tensions.”[14] Now that the invasion has started, Putin may look for a face-saving way out of the crisis; however, he will likely keep troops in the areas of Ukraine he has recognized as independent.