Denial is a word we hear a lot nowadays. Many alcoholics deny they have a drinking problem. Many substance abusers deny they are addicted to drugs. And many politicians and business leaders deny they had anything to do with the current financial crisis. Human nature hasn’t changed too much since we began recording history. I’m sure some cavemen denied they were the ones that let that the mammoth get away. Human nature probably hasn’t changed much when it comes to greed either. We all know that there are people who, given the chance, will rob the bank if it goes unguarded. Yet the same politicians who voted to deregulate many industries now seem amazed that greed and corruption crept into systems when no one seemed to be watching. America, in general, was in denial about its economy. With one of the globe’s smallest savings rates and largest debts, the American economy was (and is) fueled by credit. We all hope to see better times, but the question is how to get there from here.

Nobel Prize-winning economist Paul Krugman, claims, “To pull us out of this downward spiral, the federal government will have to provide economic stimulus in the form of higher spending and greater aid to those in distress — and the stimulus plan won’t come soon enough or be strong enough unless politicians and economic officials are able to transcend several conventional prejudices.” [“Depression Economics Returns,” New York Times, 14 November 2008]. Those prejudices, he argues, include the fear of red ink, cautious policies, and fear of doing too much. Time magazine columnist Michael Kinsley put it this way, “The nearest thing to an actual plan seems to be something like this: stimulate first, to avert various short-term disasters, and then — at some signal from the Treasury Department — turn around and start saving like mad, to avert various long-term disasters. In other words, we need to get back our consumer confidence, and then lose it again.” [“Let’s Have Another Cup of Coffee,” New York Times, 14 November 2008].

Kinsley points out the irony of the current situation. We need to spend to get the economy back on its feet, but we need to save and live within our means in order to divert future economic disasters. Everyone seems to agree that these are not normal times; but, what are normal times? Steven Pearlstein argues that there won’t be a return normalcy because a new normal needs to be created [“Toward a New International Capitalism,” Washington Post, 14 November 2008].

“‘This is a decisive moment for the global economy,’ President Bush declared … in New York as leaders from the 20 largest economies headed toward Washington for an emergency meeting on the unfolding global economic crisis. It’s not only a decisive moment for the economy, but it’s the most decisive moment for American-style capitalism since July 1944, when, after 22 days of negotiation at a remote lodge in the White Mountains of New Hampshire, leaders of 44 nations emerged with the blueprint for a new world financial order based on the principles of free markets, free trade and the free flow of capital. Although things have evolved considerably since that confab at Bretton Woods, the United States has remained the world’s most successful economy, and the rest of the world has moved, by reason of its example and its prodding, toward an embrace of its economic model. Now that is about to change.”

“As the president acknowledged in his remarks, … the United States, which has gone from the world’s largest creditor to its largest debtor, can no longer expect to dominate the institutions of international finance and will have to share power and influence with rapidly developing countries that generate more of the growth and have more of the world’s capital. Just as significantly, the rest of the world — if not a majority of Americans — is now convinced that the raw, unregulated, laissez-faire capitalism most closely associated with the American model has serious flaws and does not reliably produce the best outcome. From the Latin American debt crisis of the 1980s to the Asian financial crisis of the 1990s to the Internet craze at the turn of the century to today’s economic conflagration, the past 20 years have provided ample evidence that uncontrolled flows of private capital have created massive booms and busts that have overwhelmed the financial system and destabilized the global economy. The booms have misallocated capital, widened the gulf between rich and poor, and eroded the norms of behavior that had contributed to social and political harmony. The busts have brought financial hardship and ruin to innocent businesses and households and saddled governments with huge debts that will take generations to pay off.”

President Bush’s remarks, however, indicated that the U.S. will not abdicate its economic throne either willingly or graciously.

“As he sees it, the current crisis does not reflect any fundamental flaw in the American model but instead results from individual failures by lenders, borrowers, financial firms and regulators that can be minimized in the future, not through more regulation but through smarter regulation. And while he gives rhetorical support to the notion that international institutions may need to be updated and strengthened to deal with the crisis that might arise, he also makes clear that reform should not come at the expense of U.S. sovereignty or freedom of action.”

Here is where Pearlstein begins making his argument that clinging to past could be fatal and that creating a new international capitalism must emerge.

“Up to a point, Bush’s defensiveness is understandable, given the comforting belief in many countries that lax American regulation and Wall Street greed were the sole causes of their own economic misfortunes. Anyone with a passing acquaintance with the real estate bubbles in Ireland and Spain, the stock market bubbles in China and India, and the loose lending practices by banks in Iceland and Russia would appreciate how misguided that view is. But there is also no denying that American-style capitalism has been undermined by its own success. In its present incarnation, it rewards manipulation over innovation and speculation over genuine value creation, resulting in massive misallocations of capital and the accumulation of unheard-of wealth in the hands of money managers and top corporate executives who are more lucky than they are skilled.”

Pearlstein’s point is well taken. Real economic growth requires the creation of value as well as jobs. In the past, America’s entrepreneurial spirit and innovative people are what created that value. We can do it again — if we don’t remain in denial. In fact, the world still looks to the United States for innovation. In a recent survey of venture capitalists completed by Deloitte, no other other country in the world even came close to being the world’s leader in innovation (see the attached figure). 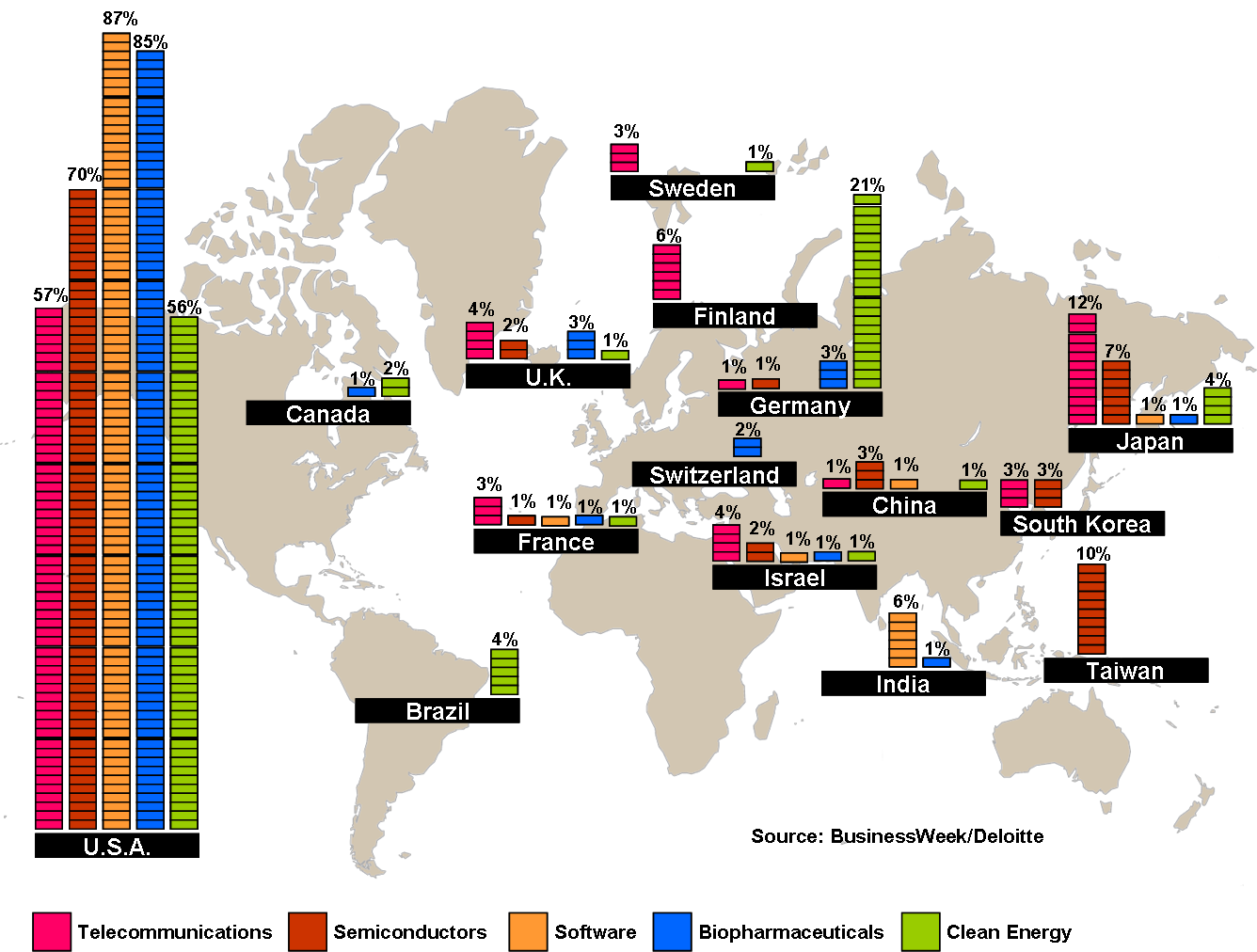 Pearlstein believes we need to allow the entrepreneurial spirit reflected in survey guide the U.S. out of its current financial morass.

“No longer is it the entrepreneurial capitalism of Google and Amazon and Nucor Steel that animates the American imagination — it is the financial capitalism of Enron and Drexel Burnham Lambert, of Goldman Sachs and the Blackstone Group, of publicly traded real estate investment trusts and multibillion-dollar hedge funds. Here in the United States, they have sucked up a disproportionate share of talent and capital, distorted compensation systems, and helped to perpetuate the false notion that companies exist solely to enrich their investors and investment bankers. And now, through the marvels of global financial markets, they have spread their toxic culture and products to economies across the globe. As they arrive in Washington, the challenge for global leaders is to find a way to tame a financial system that has not only corrupted American-style capitalism but also brought unwelcome instability to the global economy. The flaw in the old ‘Washington consensus’ is that an unfettered flow of investment capital, particularly among countries with different currencies, is not the idea. While product and labor markets work remarkably well when they are left open and lightly-regulated, experience has now demonstrated that a different approach needs to be taken toward financial markets, which suffer from imperfect information, an abundance of moral hazard, and a tendency toward herd behavior and speculative excess.”

Pearlstein surely recognizes that investors are needed to fuel the global economy and that they require (and deserve) a return on their investments. The point that should be stressed is that while equity investment is important, when it comes to development, direct investment is more important. It is the sudden withdrawal of equity investments that creates many of the challenges noted by Pearlstein. He concludes that a new international financial framework needs to be established.

“Creating a new architecture and regulatory framework for the global financial system is complicated and wonky and won’t win anyone the next election. After the Asian financial crisis in 1998, there was a lot of brave talk about updating the old Bretton Woods institutions, but petty politics and an improving economy got in the way, and nothing was ever done. Perhaps this time, the prospect of another global depression will focus the minds of world leaders and lead them to create a new model of capitalism that everyone can live with.”

The purpose of international financial institutions and the regulations by which they operate is to help dampen the global economy’s volatility. The fact that the world is currently on a roller coaster ride indicates that current systems are working as desired. Under any system there will be ups and downs, but the greatest damage is done when wild swings can wipe out a country’s middle class in a matter of weeks. If we are serious about helping reduce poverty around the world, we need to do everything possible to create a system that fosters growth and limits volatility. It’s certainly a challenge worthy of the world’s best minds.