Tom Barnett’s Great Powers: America and the World After Bush

Yesterday, I noted how many policymakers in Washington, DC, had finally come to agree with many of the positions that my colleague Tom Barnett put forth in his first book, The Pentagon’s New Map, which became a New York Times‘ bestseller. Tom’s latest book, Great Powers: America and the World After Bush, has now been released and it should become as influential as his first book. I first mentioned Tom’s new book in December in a post entitled Testing the Rhetoric of Sustainability. The scope of Tom’s latest tome is breathtaking. It provides a whirlwind tour of America’s past as a prelude to the world’s future. It weaves history, political philosophy, and grand strategy in his unique, often irreverent, but always entertaining style. 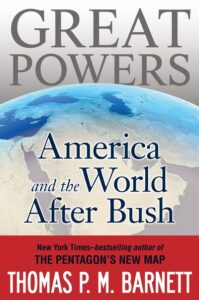 If you have any doubts that this book recommends a break with the past, you don’t have to read far into the Preface. Tom writes: “When we should have inspired hope, we have stoked fears, and where we should have built bridges, we have erected walls.” In many ways, Great Powers is all about building bridges and tearing down walls. Although Tom’s first chapter is entitled “The Seven Deadly Sins of Bush-Cheney,” Tom is not a critic who can be accused of “piling on” after the play is over. Throughout the Bush years, Tom was quick to criticize what he saw as poor strategic decisions, but he was also quick to praise decisions he felt made strategic sense. Tom is a strategist not an ideologue. One of the past administration’s largest character flaws was its inability either to see or admit error. Tom does his best to help them see those errors. As Tom notes in the book, identifying the most egregious of the Bush administration’s mistakes “is essential to America’s successful re-engagement with a world left more unnerved by our government’s counter-terrorism strategy than it was ever perturbed by actual terrorists.”

In some ways it was the Bush administration’s addiction to power that blinded it to other possibilities that could have secured for itself a different legacy. Addiction recovery programs, however, are never easy to enter and difficult to sustain. Nevertheless, in his second chapter, Tom offers “A Twelve-Step Recovery Program for American Grand Strategy.” A sober and clear-headed America is essential, Tom asserts, for ensuring that the future unfolds in a way that is good for all. He writes, “A world that rapidly doubles its middle class ranks in a generation’s time is either going to become very content or very conflicted, and no nation can do more to ensure either outcome than America.” We know from Tom’s first book that his ultimate foreign policy goal is to “shrink the Gap” — that is, help the impoverished and disconnected parts of the world to become part of the global economy. It was such discussions between Tom and I that led to the Enterra Solutions® Development-in-a-Box™ concept. You can read more about that in Chapter 7. Tom’s “12 steps” are aimed at helping America provide global leadership in shrinking the Gap.

Tom’s “12 steps” are very timely. They are: 1) Admit that we Americans are powerless over globalization; 2) Come to believe that only a bipartisanship far greater than that displayed by most national leaders can restore sanity to America’s foreign affairs; 3) Make the decision to coordinate all elements of America’s national power according to a Grand Strategy that we have collectively defined; 4) Make a searching and fearless moral inventory of the Global War on Terror; 5) Admit to the world and to ourselves the exact nature of our mistakes in Iraq and Afghanistan; 6) Show that the U.S. is entirely ready to work with the International Community to remove these defects of wartime injustice; 7) Ask President Obama to reverse America’s recent unilateralism; 8) Make a list of all the great powers whose national interests we have harmed, and become willing to make concessions to them all; 9) Make direct overtures to Violent Nonstate Actors whenever possible, except when to do so would damage existing alliances; 10) Continue to review our goal of Accelerated Democratization, and when we are wrong in our strategic approach promptly admit it; 11) Seek to create strategic alliances with Rising Powers through diplomatic linkages and military-to-military cooperation; and 12) Try to sell a new grand strategy to the world, and practice these principles in all our efforts to shrink the Gap and make globalization truly global.

In his third chapter, Tom paints a panoramic view of American expansion — both politically and geographically. He argues that the latest wave of globalization should look familiar to most Americans because the world is experiencing stages through which the U.S. has already passed. That’s the reason that globalization has often been referred to as the “Americanization” of the world. As we move forward, Tom argues that globalization will look less Americanized and that the results may shock (or dismay) some U.S. politicians and citizens. For the remainder of Great Powers, Tom describes how the world is changing (i.e., The undeniable strategic trajectory) in various sectors of human activity (namely, economics, diplomacy, security, networks, and strategy). For each of those sectors, he then describes how it will affect the United States (America’s global system perturbed); what rules are going to determine how nations relate (The new rules that emerge); how the world will likely evolve as changes are made (The resulting new normal); what trend or trends are going to fast forward emerging changes (The global accelerant); how America must adjust to these changes (Our inescapable realignment); and, American foreign policy objectives that should be pursued (The better normal America must seek).

Throughout the book, Tom lays out a detailed strategy that he believes America should pursue; but, as a realist, Tom doesn’t assume that his strategy will be fully adopted or that if it is that it will produce completely predictable results. As he writes in the book’s Coda: “The future does have a way of happening.” Above all else, Tom is an optimist and his book reflects that optimism. He is also a brilliant intellect and a compelling storyteller. Tom’s writing style makes grand strategy, history, political philosophy, future trends, and scientific debate available to everyone. His explanations are as clearly stated as they are profound. You might not agree with everything he writes in Global Powers, but Tom will make you think. And you will find it hard work to defend your ideas as well as Tom does. You can purchase the book through Amazon.com.