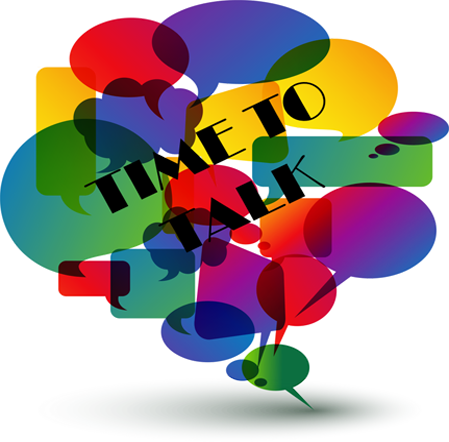 “To meet the growing global demand for food this century,” writes Giovanni Rodriguez (@giorodriguez), co-founder and CEO of SocialxDesign, “we will all need to get smarter about how we produce and distribute food.”[1] Rodriguez is letting the consumer off too easy. Consumers also have to get smarter about how they store and eat food. How big is the demand for food going to be? I’ve seen estimates of the 2050 global population ranging from 9 billion to 10.5 billion people. And this is coming at a time when food production could be peaking. Sarah Zhang (@sarahzhang) reports, “The world hit peak wheat in 2004, peak eggs in 1993, and peak dairy way back 1989 — all according to a recent study in Ecology and Society that leads to the worrisome conclusion we could be running out of food.”[2] The study also found that two other staples — soybeans and maize — peaked in 2009 and 1985 respectively. Zhang misstated the case when she wrote “we could be running out of food.” There is obviously going to be food available. What she meant was, in the future, there might not be enough food to go around. The key to ensuring that there is enough food is productivity. Rodriguez notes

“In the US, the average yield for one representative crop — maize — is more than 5X what it is in Africa. There are similarly-sized gaps between developed and developing countries for other key crops. It’s a huge problem, both for farmers in poor countries and for the future of food. As Joel Bourne has noted — he’s the author of recently published book, The End of Plenty: The Race to Feed a Crowded World — to meet the growing global demand for food this century, we will all need to get smarter about how we produce and distribute food. But where others see shared problems, people like [John] Denniston see shared opportunity. With a startup called Shared-X, he hopes to close the yield gap for the benefit of investors, farmers, and, yes, the planet.” 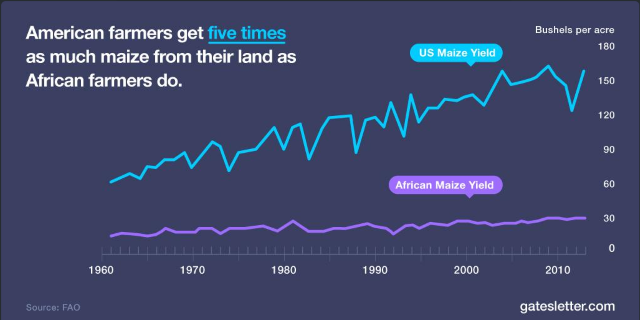 Rodriguez has highlighted what many analysts have known for years — if you are going to increase global food production, you have to help the developing world obtain better crop yields. Rodriguez explains:

“It’s not just that the world needs to produce more food. It’s also that the world’s biggest producers of produce, small farmers, are struggling to survive. According to a recent report by CGAP (the Consultative Group to Assist the Poor), there are close to half a billion small farms today. The UN, NGOs, and now a small group of entrepreneurial ventures, have identified investment in ‘smallholder farming’ as a smart way to lift people out of poverty.”

The following video provides an interesting overview of what American farmers have been able to accomplish over the past century and how they are working to increase crop yields in a more sustainable manner.

Although the video notes that in the U.S. farmers are using water more wisely, more needs to be done (not just in America, but around the world). If you want to understand the impact that agriculture is having on the planet, watch the following TED talk by ecologist Jon Foley (@GlobalEcoGuy). Foley insists that agriculture is the “most powerful force unleashed on this planet since the end of the ice age.” He says most current irrigation practices use too much water and we have to rethink how we farm. Despite the impact that agriculture is having on the planet, Foley notes that agricultural is an absolute necessity, which is why we have to learn how to farm smarter. Foley asserts that we have to double agricultural production over the next three decades. Embedded within the video is another video that clearly lays out why we have to do better in the years ahead.

Foley acknowledges that there are no silver bullet solutions that can solve the agriculture conundrum by themselves. Every good idea is going to be required to solve the challenge. Cobbled together, these new ideas will create a whole new agricultural structure that Foley calls terraculture. He maintains, however, that holding conversations on that subject have proven difficult. An article by Abby Wendle (@aewendle) underscores that point. She reports, “Producing food … requires more water than almost any other business on Earth. And the outlook isn’t pretty: One-third of food is grown in areas of high or extremely high water stress, while pollution and climate change are further limiting supplies of clean water around the world.”[3] Yet given those facts, Wendle indicates a new report from Ceres, an environmental sustainability group, found that a majority of food production companies “aren’t even engaging farmers on this issue.” Jonas Jagermeyr, a water expert at the Potsdam Institute for Climate Impact Research, asserts, “Efforts to make irrigation more efficient in the United States and elsewhere — such as better rainwater harvesting, slowing water evaporation and adopting techniques like drip irrigation — could help.”[4]

Big data analytics and new technologies lie at the heart of transforming agriculture and increasing yields; but, too often, smallholder farmers don’t have the resources to implement available solutions. We must make analytics and technologies available to the developing world if we are going to solve the world’s food security challenge. To learn more about how big data analytics and technology can help feed the world, read my article entitled “Big Data and Technology: Changing the Face of Agriculture.”