The State of U.S. Logistics

The Council of Supply Chain Management Professionals (CSCMP) issues an Annual State of Logistics Report and the latest report was issued earlier this month. The CSCMP report was supported by Penske Logistics and authored by Rosalyn Wilson of Delcan. It is widely read around the globe. For example, the European-based Supply Chain Standard noted, “US business logistics costs rose 6.6 per cent last year to a total of $1.28 trillion – and now account for 8.5 per cent of US gross domestic product according to the latest State of Logistics report from the Council of Supply Chain Management Professionals.” [“US business logistics costs rise 6.6 per cent,” 15 June 2012] The article went on to state:

“This year’s report reveals that with overall revenue 15.3 per cent higher than 2010, railways gained market share, especially in intermodal, and did not experience capacity problems faced by the trucking sector. Trucking companies are also using intermodal rail help to offset the impacts of driver shortages and the costs of acquiring and maintaining new equipment.”

William B. Cassidy, Senior Editor of The Journal of Commerce, confirms that use of intermodal rail is on the rise. [“Shippers Shift Modes Seeking Savings, Capacity,” 13 June 2012] “Rising transportation costs and tight truckload capacity,” he writes, “are creating more opportunities for intermodal rail in 2012.” John Lanigan, executive vice president and chief marketing officer at BNSF Railway, told Cassidy, “Our domestic intermodal growth this year is up near double digits.” According the CSCMP report, tight trucking capacity has also resulted in a decline in trucking volume but a rise in trucking rates. The Supply Chain Standard article reports that “trucking rates were up 5 to 15 per cent in 2011.” Another finding of the CSCMP that caught the attention of the staff at Supply Chain Standard was “that inventory carrying costs in 2011 continued a rising trend.” The article noted:

“‘Overall inventories have returned to pre-recession levels, which could be a cause for concern for the economy,’ it said. ‘The growth has occurred among wholesalers and manufacturers while retail inventories remained flat, indicating that inventory management processes have changed.'”

“Among the many interesting data points in the Annual State of Logistics report from Rosalyn Wilson and CSCMP is the following, which frankly caught us a bit by surprise. As shown in the chart below from the report, there has actually been a rather dramatic shift in progress relative to where inventories are being held in the supply chain. As can be seen, since at least 2005, retail inventories have held basically flat, while inventory levels at manufacturers and wholesalers have climbed rather steeply, with the exception of the 2008-09 recession years. Keep in mind the this data is based on absolute dollar levels of inventory, not percentage changes or relative to sales, but we suspect the basic pattern would hold true for those two metrics as well. Apparently retailers really are ordering lower quantities more frequently. We thought it might be an urban legend.” 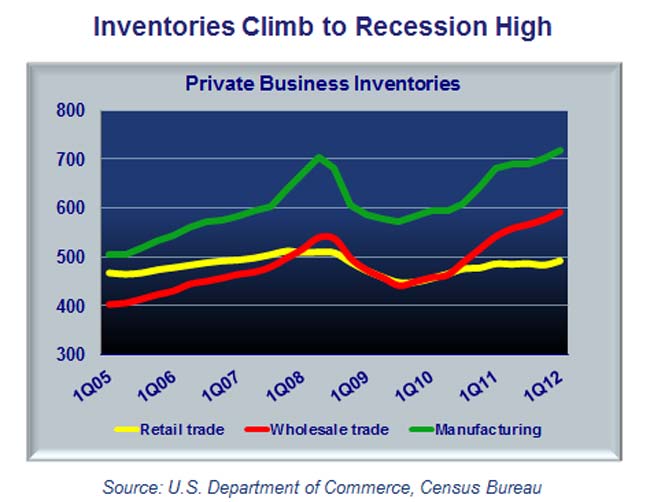 In a previous article, Dan Gilmore, Editor-in-Chief of Supply Chain Digest, provided a broader overview of the CSCMP report. [“State of the Logistics Union 2012,” 14 June 2012] He wrote:

“This represents the 23rd edition of the report, which was launched in the late 1980s by the late Bob Delaney and sponsored by his company, Cass Information Systems. Somewhere along the way, CSCMP took over the sponsorship, and in the late 1990s Wilson, who has a long career in the logistics industry, began to support Delaney in his efforts. Upon Delaney’s passing a few years later, Wilson took on the challenge alone, largely keeping the existing methodology. Over the past couple of years, the report has received even more hype, with a corporate sponsor (Penske, for the third year). … As always will summarize the report here.”

Gilmore offered up the same statistics noted in the Supply Chain Standard article cited above, but he also added more details from the report. He wrote:

“Just for perspective, the total cost of US logistics was estimated at $1.28 trillion in 2011, up 6.6%. A lot of elements go into that number, from warehouses to trucking to pipelines, but the three main categories are inventory carrying costs, including the costs of warehousing, (32.6% of the total), transportation costs (62.8%), and administrative costs, mostly related to logistics IT spend not otherwise capture in the other two categories (just 4.6% of the total). Within transportation, trucking related costs compromise 78% of transport costs and 49% of total logistics spend, while other carriers (rail, water, pipelines, etc.) account for 22% of transportation spend and 13.8% of the total spend. That $1.28 trillion in total logistics spend is 17% above the 2009 bottom, but still below the 2007 peak of $1.39 trillion. Carrying costs were up 7.6% in 2011, but that was almost all from a general rise in total inventories (not necessarily a rise in inventory versus sales levels). The higher the absolute level of inventory, the higher the absolute spend for insurance, taxes, depreciation, etc. We will note here that what the true carrying cost of inventory should be is far from an exact science, and others might calculate this macro-number differently than Wilson does, but the report has been using the same methodology for years, so year over year the numbers and direction are consistent and do reflect trends.”

Gilmore continued his discussion of inventory costs and then provided a few additional highlights from the report. He wrote:

“US industrial production was up 3.9% in 2011, versus 6.3% growth in 2010. However, we will note the 2010 level was off the disastrous 2009 numbers, making the comparisons much easier to beat. The evidence seems to suggest that retailers are holding a tight line on inventories, pushing inventory holdings back up the chain. The inventory to sales ratio for retailers was basically flat in 2011, but grew substantially in the wholesale and manufacturing sectors during the year. Warehousing costs were said to be up 7.6% in 2011, which Wilson primarily attributes to rising costs for rents/leases, which had been crushed since the financial crisis started. She also notes for the first time since 2008, developers were starting to build new distribution center sites in 2011. “

Although rising costs aren’t good news for shippers or consumers, the fact that new logistics-related construction is taking place is good news. Gilmore continued with a discussion of the trucking sector:

“Rising new Class 8 truck prices are impacting how carriers think about their fleets, and contributing to asset discipline. New trucks today are 30% or more above the costs of just a few years ago, meaning more existing vehicles need to be sold relative to new buys. Even though new truck sales have been relatively strong, even more are being sold off, mostly to foreign markets, keeping the nation’s overall fleet status flat or lower. Only 665 carriers went bankrupt in 2011, a change from the past few years when about that many went bust each quarter. Wilson says the reduction in bankruptcies is not only a reflection of the better rate environment, but that used truck prices for foreign buyers are way up, allowing many carriers to sell of assets profitably and just leave the market, versus filing bankruptcy. If the new Hours of Service rules due go into effect in July, 2013 as scheduled, Wilson says estimates are that there will be a 3-8% drop in driver productivity. We say that will come back in the form of higher rates. If, as the American Transportation Research institute calculated in 2011, driver wages and benefits equal about 37% of marginal trucking cost, that would imply potential freight increases of 1.1 to 3.0% (.37 times 3-8), apart from any other upward cost or rate pressures. Wilson cites a Union Pacific executive as saying that if US truckload capacity is reduced by just 5% from regulations and a driver shortage, intermodal loadings are likely to jump nearly 30%. Truckers have been acquiring intermodal chassis and trailers like crazy, Wilson says.”

Gilmore concluded his discussion with observations about the maritime shipping sector. He wrote:

“Volume levels were not good at most US ports. The port of LA was down 1% in container volumes, Long Beach 3%, and Seattle 5% in 2011. Oakland and Tacoma were up 1% and 2% respectively. On the East Coast the news was a bit better, with New York/New Jersey and Savannah both saw increases of 4%, while Charleston and Norfolk were up about 1%. Given the growth imports in dollars, this implies we are importing higher priced/value goods, does it not? Or more from Mexico/Canada on trucks. There is more, but that’s all I have room for. Nice job as usual by Wilson and CSCMP.”

Bob Ferrari also provided an overview of the CSCMP report. Concerning the maritime shipping sector data in the report, Ferrari was a bit more sanguine than Gilmore. “A very positive side of the ports data,” Ferrari wrote, “is the positive volume growth of U.S. east coast ports which we believe reflects a resurgence in manufacturing related imports and the ongoing resurgence of the automotive sector.” [“The State of U.S. Logistics: Reviving but Troubling,” Supply Chain Matters, 19 June 2012] Ferrari concluded:

“Overall takeaways from the 2011 report are obviously dependent on the reader frame-of-reference. If you reside anywhere in the transportation and 3PL logistics sector, the trend is obviously positive. Distribution center operators and real estate interests are included. If your frame of reference involves maintaining the current momentum and resurgence in U.S. manufacturing, than we submit there are troubling areas of concern regarding current trends.”

Like other analysts Ferrari did comment on inventory levels, especially the trend that shows that “retailers [are] pushing inventory up the chain.” He added that increased manufacturer inventory levels probably also reflect the fact that manufacturers have been affected by increasing supply chain disruptions and may have increased their safety stock to mitigate the effects of future disruptions. Whether you consider the findings of the CSCMP report encouraging or troubling depends on whether you believe the U.S. economy can continue to claw its way out of recession. I agree with Ferrari’s conclusion — the message is mixed.