In a post entitled The Importance of Connections, I discussed the fact that humans have been rightly labeled social animals. It’s one reason that people continue to look for ways to connect with each other. Some people believe that the advent of social networks (things like MySpace, Facebook, and Twitter) started a revolution akin to the industrial revolution. My friend Critt Jarvis forwarded a YouTube video that briefly explains why people are thinking a revolution is underway.

Just in case you didn’t have time to click and view the video, let’s review some of the pertinent facts presented in it. The video claims that by the end of next year, Gen Y will outnumber Baby Boomers. The importance of that fact is that Gen Y is considered the first generation that been raised in the Internet age. Baby Boomers may have had a hand in creating the Internet, but Gen Yers have never known a world without it. Although Baby Boomers are discovering social networks (the fastest growing segment of Facebook contains females between 55-65 years of age), the video claims that 96% of Gen Y already belong. The video also claims that social networks have overtaken pornography as the top activity taking place on the Internet.

One of the metrics that analysts use to explain the popularity of particular technologies is rate of penetration (that is, how quickly a specific technology achieves wide acceptance). Such statistics can be a bit deceiving since the number of people in the world keeps increasing and many of them are becoming wealthier. Nevertheless, the facts are interesting. The metric used in the video is the time it took for different technologies to reach 50 million users. The radio took 38 years; television took 13 years; the Internet took 4 years; the iPod took 3 years; and, remarkably, Facebook added twice that number in only 9 months. It notes that if Facebook were a country, it would be the fourth largest country in the world! Yet China’s social network, QZone, is even larger — having over 300 million users.

Social networks are one of the reasons that smartphones have continued to sell well even during the current recession. For more on that subject, read my post The Rise of Smartphones and the Galápagos Syndrome. The video notes that it only took 9 months for iPhone users to download over a billion applications. In an interesting twist, iPhones are now becoming a source of news stories and helping merge new media with old [“All a Cub Reporter Needs Is a Scoop and an iPhone,” Claire Cain Miller, New York Times, 30 August 2009].

“A Web site for local news hopes to fill the growing void in professionally reported local news by recruiting citizens armed with iPhones as reporters. The site, Fwix, will release an iPhone application this week that enables its users to file news updates, photos and videos, live from the field. The items will appear on Fwix’s year-old Web site, which also collects links to local news articles from newspapers and blogs in 85 cities.”

The article points out that Twitter is already being used to report breaking news, but observes that the “news gets lost amid tweets about the cat and plans for dinner.”

Returning to the video, it claims that on average students learn better on-line than in face-to-face environments (that is, they outperform counterparts who have been taught using traditional teacher/student methods). Bumper sticker claims like this need to viewed cautiously. There are probably a lot more variables involved than just the fact that technology is used. For example, on-line users could be more motivated to learn than the general population. We do know that on-line courses are more economical and convenient, which probably accounts for the fact that 1 in 6 students enrolled in higher education are taking on-line curricula.

One of the facts presented in the video of which I’m suspicious is that “80% of companies are using LinkedIn as their primary tool to find employees.” That sounds high. I suspect that personal contacts still play a significant role and LinkedIn may only reflect the importance of such contacts. I asked some of my human relations employees about the statistic and they also questioned “whether 80% of the companies use it as their primary tool.” They told me that “it is a very effective tool as are some of the other networking sites. The beauty of LinkedIn is that it gives recruiters access to candidates that are not actively looking. Recruiters have a greater access to quality candidates when given the opportunity to recruit from a pool of candidates that are not necessarily looking; the reason for this is that in general candidates that are not looking for other opportunities usually tend to be happy where they are either because:

a. they enjoy their work
b. their employers value them and show their appreciation for them
c. or a mixture of the above.

“So having an opportunity to hire someone that fits the above is much better than hiring someone that is constantly posting himself on job boards like Monster because he is either insecure about his position or is unhappy where he is. The networking sites are becoming more of a norm than they were just a year ago and most competent recruiters use them to compliment their recruiting efforts and are proactive in expanding their networks so that when future needs arise they are already ahead of the game and are ‘linked in’ to someone in the field or area of expertise or that works within one of the companies that has the necessary talent.” In other words, I suspect that it’s the personal contact that is important not just the technology.

Although there has been a lot written about contenders trying to unseat Google as a search engine, the video surprised by claiming that YouTube remains the second largest search engine on the Web. Maybe I shouldn’t have been surprised. Videos are so popular on-line that even some impoverished populations with limited broadband access use what little access they do have to view them (see my post entitled The Paradox of Internet Growth in Emerging Markets). The YouTube video embedded in this post demonstrates how powerful they can be.

The video claims that Wikipedia is more accurate that the Encyclopedia Britannica, but the founders of Wikipedia are still concerned about errors and vandalism because such errors “can resonate around the world” [“Wikipedia Looks Hard at Its Culture,” by Noam Cohen, New York Times, 30 August 2009]. Cohen writes:

“Wikipedia has never been more influential but this success has come with burdens — errors or vandalism can resonate around the world, while the largest projects, English Wikipedia and German Wikipedia, were losing steam, adding fewer articles and scaring off potential new contributors. And to a certain temperament, great success naturally leads to the question, how long can it last?”

The video also discusses how many blogs there are on-line. It stresses how important those blogs are when it comes to posting opinions about products and brands. It asserts that companies need to pay attention to what is being said about them on-line because consumers have a much greater trust in peer reviews than they do in advertising.

Perhaps the saddest point made by the video that is that availability of on-line content has had a significant and negative impact on traditional print media. Newspapers all across the U.S. are struggling to survive. If newspapers go the way of slide rules, society will be the worse for it. We still require in-depth reporting that presents all sides of important issues. The one-sided, sound-bite reporting that is now accepted as “news” has exacerbated the deep political divide that now plagues America. The video claims that people once sought out the news but now the news finds us. I’m not so sure. It seems to me that people too often nowadays seek out news sources that support their positions rather than seeking out news sources that could help them see issues from both sides.

The point of the video is that social networking is here to stay and that organizations need to understand this new phenomenon. I’ll leave it up to you to judge whether social networks have created a revolution akin to the industrial revolution. 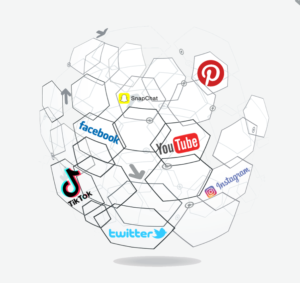