Home » Food and Drink » The Sensory Pleasures of Food 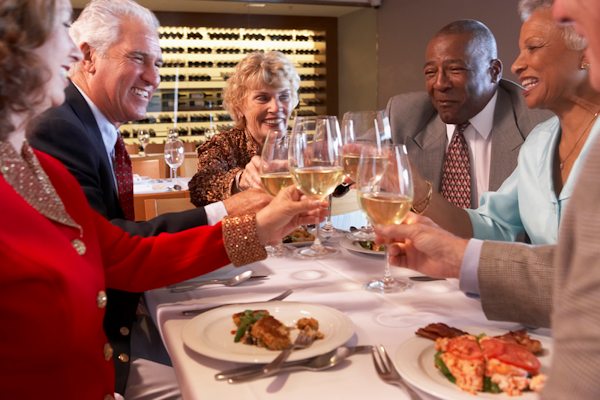 The Sensory Pleasures of Food

More often than not, discussions about food focus on how things taste. A lot of people use the terms “taste” and “flavor” interchangeably — and that is unlikely to change; however, tastes have a biologic basis. The current scientific inquiry is into whether humans have the ability to identify five or six specific categories of taste. Scientists first believed there were only four tastes: sweet, bitter, sour, and salty. Then they determined there was a fifth taste: umami, which is a savory taste. Now some scientists believe there is a sixth taste: fat. To determine whether something is really a “taste,” researchers have to isolate the sense of taste from other senses, especially the sense of smell. Jenn Savedge explains, “When researchers talk about taste, they’re talking about something that can be perceived with the tongue alone. Close your eyes and plug your nose and you will recognize salt if it is sprinkled on your tongue.”[1]

When tastes are mixed together, you start creating flavors; howbeit, flavors also rely on other senses, especially the sense of smell. As Savedge explains, “Next comes flavor, which is what we perceive when both taste and smell work together. Without your nose, you may taste something as sweet, but you won’t recognize it as chocolate without the aroma.” Another author observed, “While the terms ‘taste’ and ‘flavor’ often are used interchangeably, there is a difference between the two. … The taste of a food is what the taste buds perceive; the flavor of a food is the combination of these tastes, plus the aroma and the other sensations.”[1] In fact, scientists are beginning to learn that aroma and other sensations play a more significant role in our dietary habits than most people think.

Food and our senses

The pleasure food provides relies on all our senses. Think about the scent of baking bread; the crunch of potato chips; the beauty of a well plated meal; or the sizzling sound of bacon in the morning. Below are a few of things scientists are learning about how other senses affect flavor and our enjoyment of food.

Sight: Researchers from Ireland and the United States are studying how the appearance of food — especially its color — affects how we perceive its flavor. According to Amalia Scannell, an assistant professor from University College Dublin, “Taste is only one very small part of the equation. … Our taste buds and our nasal receptors receive signals from food as it is chewed up in our mouths, but when we ‘taste’ food our brains also take into account everything we’ve learned in our lives about food, the social context of it, our memories and our expectations. It’s hugely complex. If I had to pick one factor that is most important in making food appealing, I’d say it was color rather than taste. Human beings are very visual and we choose food with our eyes first.”[3] Nina Sparling reports a new study from Penn State agrees with Scannell’s conclusions. She writes, “[The study] confirms longstanding research into the relationship between color and taste. What consumers see when they eat matters as much — if not more — than what they taste. … What consumers expect when they see a food primes the palate to taste certain flavors.”[4] She adds, “Many food brands rely on visual expectations to pull customers into unfamiliar products. Take alternative protein: a burger that mimics the appearance and color of a beef patty elicits a different reaction than a green-hued veggie-dense alternative.”

Jaswin S. Singh reports a study by Emerald Insights confirms consumers make food and drink purchases based on colors and how those colors reflect tastes. She writes, “Consumers base flavor of food and drinks to color. [The study found] 90% of buyers make [their] decision after seeing the color and their perceived taste of the product.”[5] She adds, “Many people have associated lime with green [and] lemon with yellow. Consumers also always thought that orange is for orange, red for apple or strawberry [and] blue for bubble gum or [something] else. According to Food Business News, color psychology has a huge effect to it. People have an instant reaction when they see a specific color. For example, the color white, such as soya, has a calming effect. Meanwhile, the color yellow is linked to happiness and increasing energy. Other drinks like water, which is clear in color, give a refreshing effect. Manufacturers and marketing strategists really think about the color they would put into their products because of these. Sometimes, they are even more important than the flavor and the taste of the product itself. [The] colors red, purple and orange have the highest appeal to people. They have the same color as natural plants and food that is why people are more drawn into them.” Sparling concludes, “Although it may be possible to radically alter food colors, it may not be advisable. According to [the Penn State] study, 40% of consumers would be left behind, stuck on familiar patterns. That’s a big gamble for food brands to take.”

Smell: As noted earlier, the relationship between our senses of smell and taste is well-known. What is less commonly known is that people can smell the exact same item differently. Science journalist Marcus Woo (@sucramoow) explains, “Most of us know a potato chip when we sniff it. But at the chemical level, a new study shows, our noses smell quite different things. The idea that each person’s sense of smell is different — while still agreeing that cheese smells like cheese and a potato chip smells like a potato chip — isn’t new. But other than this new research, supporting data has been scant.”[6] The study was conducted by Madeleine Rochelle, a graduate student in odor chemistry at Cornell University. Concerning the study, she states, “This is the first time there’s proof that people are experiencing different things when eating the same product or smelling the same thing.”

Touch: Another Penn State study concluded, “Food’s texture affects whether it is eaten, liked or rejected.”[8] According to Penn State research team, “Some people are better at detecting even minor differences in consistency because their tongues can perceive particle sizes.” Team member John Hayes (@TasteProf), an associate professor of food science, notes, “We’ve known for a long time that individual differences in taste and smell can cause differences in liking and food intake — now it looks like the same might be true for texture. This may have implications for parents of picky eaters since texture is often a major reason food is rejected.”

It should be clear that the enjoyment of food relies on how all our senses perceive them. As more is learned about these relationships, cognitive technologies will be useful in helping the food industry combine sensory characteristics in an appealing way. To some extent, Enterra’s SensoryPrint™ technology can already do this for flavors. Eventually, sights, smells, and textures should be able to be added to the mix. The result should be a more pleasurable dining experience.