The Rise of Entrepreneurialism

In a previous post [Entrepreneurs as Heroes], I indicated that I would discuss other articles from The Economist‘s special report about entrepreneurship. This is the second of five such posts. Because the current recession has caused many companies to shed jobs, the magazine believes that encouraging people who could create jobs — perhaps lots of them — is “An idea whose time has come” [24 March 2009 print issue].

“Victor Hugo once remarked: ‘You can resist an invading army; you cannot resist an idea whose time has come.’ Today entrepreneurship is such an idea. The triumph of entrepreneurship is driven by profound technological change. A trio of inventions—the personal computer, the mobile phone and the internet—is democratizing entrepreneurship at a cracking pace. Today even cash-strapped innovators can reach markets that were once the prerogative of giant organizations.”

The article notes that individuals and small companies have an array of tools available to them that allows them to remain small but act big.

“The development of ‘cloud computing’ is giving small outfits yet more opportunity to enjoy the advantages of big organizations with none of the sunk costs. People running small businesses, whether they are in their own offices or in a hotel half-way round the world, can use personal computers or laptops to gain access to sophisticated business services.”

To read more about cloud computing see my posts entitled The Coming Age of Cloud Computing, The AIR is Getting Blurry with Clouds — Computing that is, IBM Heads into the Clouds, and Google brings Cloud Computing to the Masses. Cloud computing had expected to receive a boost from the merger of IBM and Sun Microsystems, but IBM withdrew its takeover offer this past weekend.

It can be argued that no one has benefitted more from entrepreneurialism than the poor. The Economist points to the contributions made by individuals like Muhammad Yunus, founder of Grameen Bank, and Iqbal Quadir, founder of GrameenPhone. To read more about Yunus see my post Financing the Poor. According to the article, Quadir became acquainted with Yunus and that relationship enabled Quadir to realize his dream of bringing cellphones to the poor.

“Bangladesh now has 270,000 phone ladies who borrow money to buy specially designed mobile-phone kits equipped with long-lasting batteries, and sell time on their phones to local villagers. Grameen has become Bangladesh’s largest telecoms provider, with annual revenues of around $1 billion; and the entrepreneurial phone ladies have plugged their villages into the wider economy.”

Every economy, rich, poor, and in between, benefits when entrepreneurs flourish. The article recounts how entrepreneurialism now plays a major role in economic theory.

“Today entrepreneurship is very much part of economics. Economists have realised that, in a knowledge-based economy, entrepreneurs play a central role in creating new companies, commercialising new ideas and, just as importantly, engaging in sustained experiments in what works and what does not. William Baumol has put entrepreneurs at the centre of his theory of growth. Paul Romer, of Stanford University, argues that ‘economic growth occurs whenever people take resources and rearrange them in ways that are more valuable. … [It] springs from better recipes, not just more cooking.’ Edmund Phelps, a Nobel prize-winner, argues that attitudes to entrepreneurship have a big impact on economic growth.”

I like a good analogy and Romer’s analogy about how innovation comes from “better recipes, not just more cooking” describes what has also been referred to as “modular innovation” [see attached model]. A better recipe for cooking tuna casserole doesn’t change the nature of the tuna, only how different ingredients improve its flavor; or, to use an example I’ve used elsewhere, the Germany’s blitzkrieg strategy didn’t change the nature of trucks, tanks, and airplanes, it simply changed how they worked together. The point is that entrepreneurs are at work in all quadrants of the model generating and implementing ideas that will have enormous impacts on the globe’s economic future. 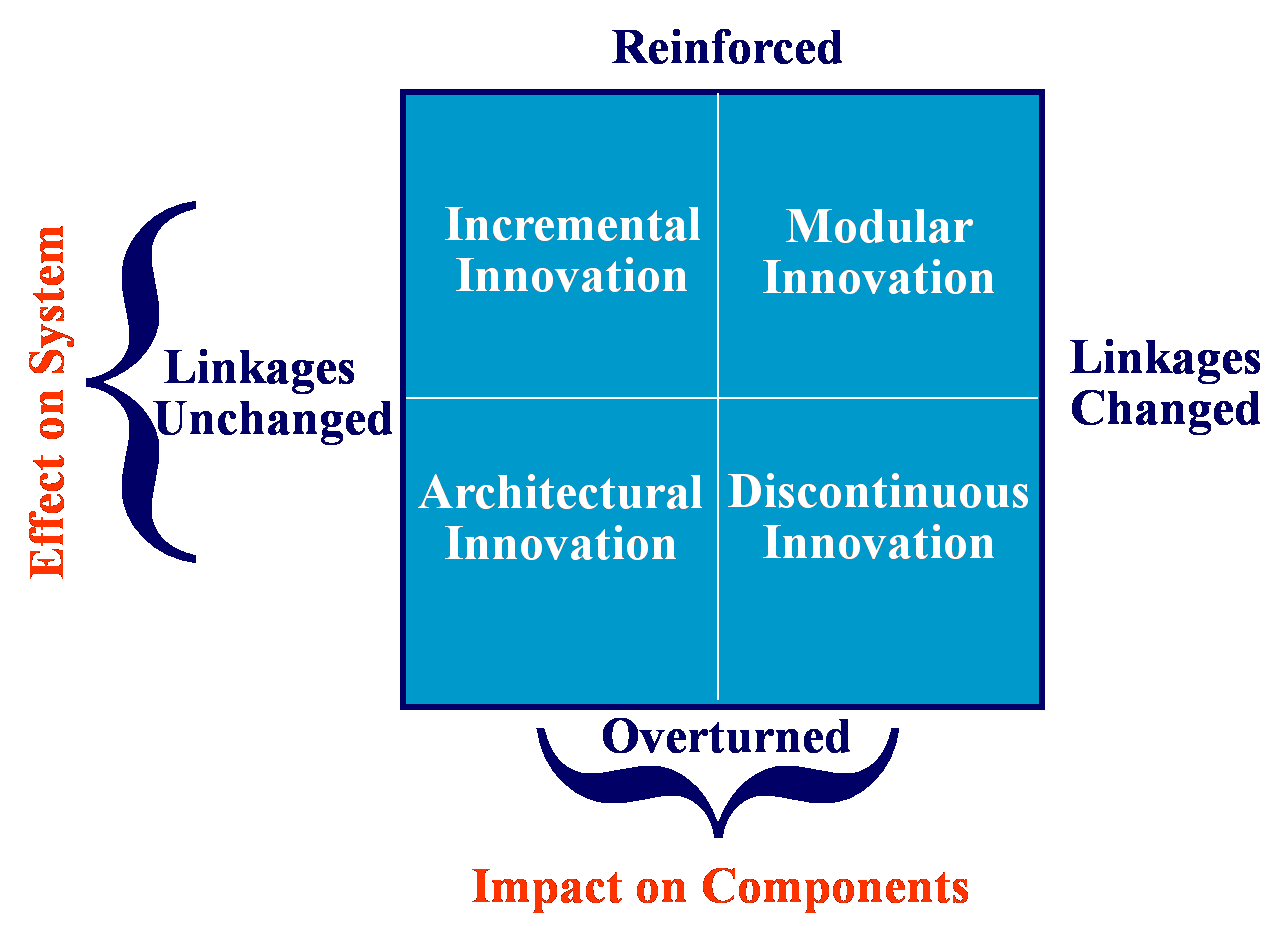 The article goes on to list reasons it believes entrepreneurship has gone mainstream. The first reason, according to the article, is that the social contract between big companies and their employees have been broken. No longer can an employee hire on and expect a secure job for life. This social contract has even been broken in Japan, where, for generations, people expected to work a lifetime for a single company. Under such circumstances, employees feel much freer to pursue their good ideas on their own instead of sharing them with their company. The next reason the article offers is that so many institutions have begun providing support to entrepreneurs, especially institutions of higher learning. The article even notes that the media has played a role, with shows like Britain’s “Dragon’s Den” and America’s “The Apprentice.” Shows like “American Inventor” have sparked copycats in places like China where “state-owned Central Television has a show about entrepreneurs pitching ideas to try to win $1.3m in seed money.”

The story concludes by noting that countries now compete to increase their place on the World Bank’s “Doing Business Index,” which it began publishing in 2003. “Since 2004 various countries have brought in more than 1,000 reforms. Three of the top reformers in 2007-08 were African—Senegal, Burkina Faso and Botswana. Saudi Arabia too has made a lot of progress. Doing Business is also encouraging countries to learn from each other.” In the end, “Robert Litan, of the Kauffman Foundation, suggests that the World Bank may have done more good by compiling Doing Business than by lending much of the money that it has.” As noted above, I’ll continue this discussion and look at other articles from The Economist‘s special report in future posts.