Home » Development » The Resilience of Somaliland

The Resilience of Somaliland

About once a year, something comes along that draws my attention to Somalia. This year it was piracy [see my post entitled Shiver Me Timbers — A New Age of Piracy]. In 2008, I wrote a post entitled Somalia — Poster Child of Failed States. That post also focused on piracy in Somalia. With conditions continuing to deteriorate in 2009, I wrote, “The lawlessness that defines Somalia has made it a haven for pirates that has drawn the world’s attention, but not in a good way. Radical Islamists are beginning to overrun Somalia making matters even worse (if that is possible).” [More on Somalia] Last year I wrote that Somalia “has endured nearly two decades of violence and instability. Nowadays most of the focus is on the al-Shabaab insurgent group, an Islamic organization that disguises political objectives in religious polemic. … So amid all this instability and violence, what is there to be hopeful about? Surprisingly, in a nation that has, for all intents and purposes, been ungoverned for the past two decades, Somali citizens have still managed to cobble together a functioning economy.” [Hope for Somalia?] 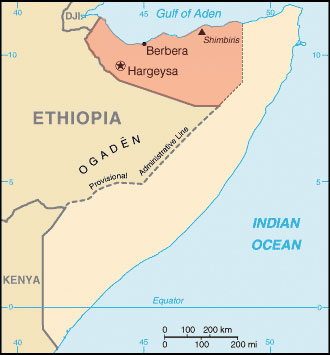 Somalia is fascinating because it is dysfunctional and at the same time resilient. It is also a country divided. Since 18 May 1991, the northern coastal region of the country (known as Somaliland) has acted as a sovereign, independent country. Although recognized internationally as an autonomous region of Somalia, Somaliland has not gained international recognition as an independent state. Unlike the rest of Somalia, Somaliland does have a functioning government and enjoys a modicum of stability and prosperity. On the 20th anniversary of Somaliland’s declaration of independence, the Financial Times published a couple of interesting articles and an audio slideshow about the region. Katrina Manson, who wrote both the articles and narrated the slideshow, reports, that Somaliland “is largely peaceful and has built itself up from ruin with very little outside donor help.” [“Somaliland aims to show coming of age,” 17 May 2011] She continues:

“Over the past 20 years, as its neighbour has descended into war, terrorism and piracy, Somaliland has sought to establish the trappings of a functioning state with its own currency, something approaching a central bank, democratic elections and a fiscal team of econometricians in pursuit of a wider tax base.”

Despite “the trappings of a functional state,” Manson admits that commerce is “largely unregulated.” Nevertheless, business is being successfully conducted. She continues:

“Local businessmen say that … commerce … is flourishing against the odds and characterized by ferocious appetite for a tidy profit. ‘The lifeblood of every Somali is trade,’ says Paul Crook, chief technical adviser to the UN International Labour Organization’s Somalia program, who has lived in Hargeisa, the Somaliland capital. Somalilanders have also become technologically savvy, transferring money across the world, making calls on solar-charged smartphones and shopping with debit cards. Their thriving business acumen may be the best way to effect de facto recognition.”

In other words, globalization has permitted the region to progress against staggering odds. Manson reports that the local mobile communications operator has 400,000 subscribers in a region containing only 3.5 million people. Manson describes some other aspects of globalization that have helped Somaliland. She writes:

“Somaliland inspires fearsome loyalty among its native sons and daughters and an estimated 1m Somalilanders abroad send home more than $1bn each year. Educated expatriates, including public finance experts, have given up jobs in Europe and North America to return home and now want to more than double state revenues within a year to $88m and reach $160m by 2013. Already they have doubled civil servant salaries and rooted out more than 5,000 ghost workers after 2010 elections brought a new administration vowing transparency in government.”

The government of Somaliland is trying to be fiscally responsible (imagine that!). Mohamed Awaed Mohamoud, a member of Somaliland’s public finance management team, told Manson, “What we get, we spend. We have a cash budget from hand to mouth and no development budget. But we try: we don’t take loans and we have no debt and no deficit up to now.” Such fiscal responsibility is not only rare but refreshing. The problem, of course, is that, without development money, economic growth will be slow at best and non-existent at worst. Among other things, Somaliland needs more reliable power supplies. Manson concludes:

“The government aims to boost tax revenue from 5 per cent of gross domestic product, one of the world’s lowest, to 13 per cent next year – still far below the sub-Saharan Africa average of 18-20 per cent. Officials calculate that one company alone evaded $9.13m in taxes. Investors remain wary but some, including Chinese telephone infrastructure companies and UK frontier private equity, are backing it. So confident is one British Somalilander, who runs a UK investment firm, he wants to set up a £30m diaspora fund. ‘Somaliland is the classic anomaly: the perception and the reality are far apart and in the middle is a huge amount of money,’ says Mohamed Yusef, CEO of London’s Invicta Capital. He has already secured an oil block unencumbered by potential rival claims from foreign oil companies, who pulled out long ago. He also sees fishing, livestock exports and power generation among possible growth sectors, saying: ‘I see Somaliland as an undervalued share – buy low and ride the tiger up.’ The UN Food and Agriculture Organization estimates Somaliland’s 850km shoreline could yield 40,000 tons a year of fish compared with between 1,000 and 5,000 a year now.”

In a companion article, Manson writes, “While no government recognizes Somaliland, the business stamp of approval is proving less elusive.” [“Coca-Cola boosts Somaliland economy,” Financial Times, 17 May 2011]. She continues:

“Coca-Cola has issued a second license within Somalia, which will cover Somaliland and neighboring, semi-autonomous Puntland, a tacit recognition of Somaliland’s functioning economy. The company’s other franchise, which is based in Mogadishu, is no longer able to function because of violence in the Somali capital. Coca-Cola’s vote of confidence – long withheld – may do more to propel investor interest and confidence than any political move.”

The businessman who won the franchise, Ahmed Guelleh, owned a Coca-Cola franchise some 26 years ago before Somalia became a failed state. Manson reports that Mr. Guelleh and his four brothers are a highly successful trading family. “Their $5m-a-year import-export operation brings in everything from porridge oats to tires while sending out animal skins and frankincense, as well as serving as agents for a shipping company and DHL.” The significance of the Coca-Cola franchise, however, is that the bottling plant will be “among the first manufacturing investments in Somaliland.” Manson reports the factory will use “brand new machinery from Austria and Italy.” Although the factory “has cost $10m,” Manson reports that it “is expected to generate an annual $3.2m profit, bottling 11,000 an hour and employing 130.”

The more economically successful Somaliland becomes, the greater the pressure there will be to recognize it as a sovereign nation. Many economically unviable regions of the world are seeking independence and governments fear that recognizing Somaliland would establish a bad precedent. Regardless, you have to give the people there credit. The government appears to be holding corruption in check. It is trying to build its economy on fiscally sound policies. And the theme of its 20th anniversary celebration of independence is: “Somaliland is the champion of democracy in the Horn of Africa.” Supporters of Somaliland independence are hoping that three things result from this year’s celebration:

“[First] that the world will appreciate the achievements and commitment of Somaliland to peace, stability and democracy in the region in the last 20 years. Secondly, … that the international community including the African Union, European Union, United Nations, U.S, supports the sustainability of the democratic system established in Somaliland. Thirdly, … that the international community steps in to urgently recognize Somaliland as a sovereign state as Somaliland fulfils all the criteria of statehood legally and politically.” [“20th anniversary of Somaliland’s independence celebrations kick in Europe,” Somaliland Press, 18 May 2011].

Those hopes are unlikely to be realized for a number of reasons. First, Somaliland’s economic base is modest and mostly involves the trading of livestock. It needs a much more diversified economic base to prove its long-term viability. Second, it has the misfortune of being in a very bad neighborhood. Ships are reluctant to pull into Somaliland ports for fear of being hijacked by Somali pirates. Finally, there are efforts to transform Somaliland’s democratic government into an Islamic one. Such efforts are met with great skepticism around the world. Somalilanders would be better served to pursue a Turkish model than a Taliban model. Nevertheless, you must take your hats off and salute the resilience of people of Somaliland. Whether they gain the international recognition they desire or not, I wish them another twenty years of peace and prosperity.

“A decade ago,” writes Stephanie Strom (@ssstrom), “C. K. Prahalad, a University of Michigan business professor, in his book ‘The Fortune at the Bottom of

Most analysts agree that the greatest opportunities for companies looking to grow significantly will be found in emerging markets. The reason is simple: markets in developed