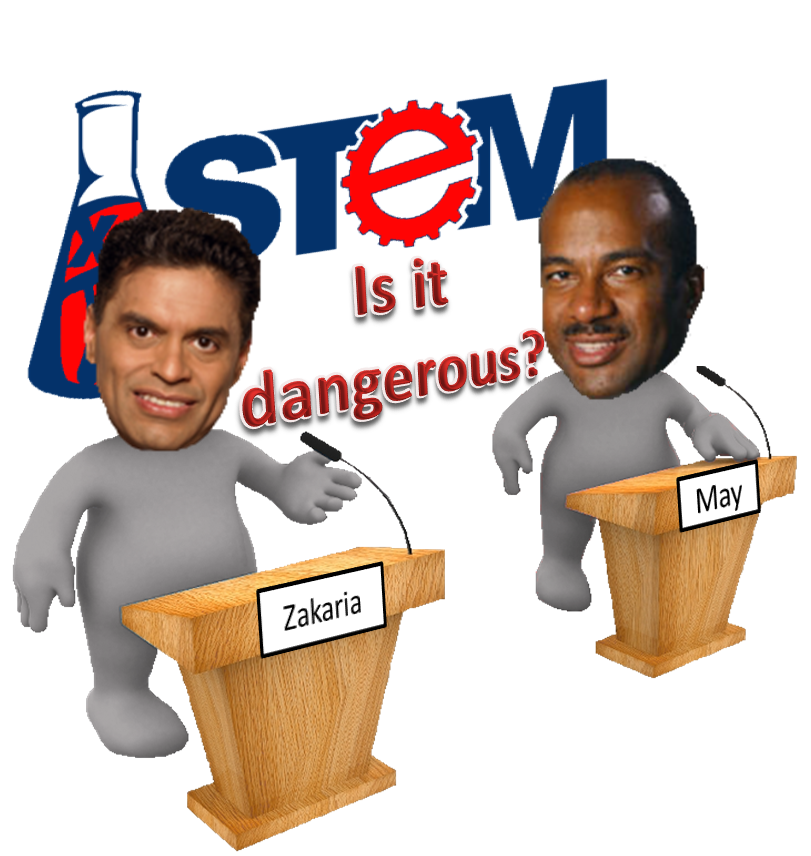 The Over-the-Top Debate about STEM Education

Fareed Zakaria (@FareedZakaria), a columnist for The Washington Post and host of “Fareed Zakaria GPS” on CNN, recently created quite a stir in the field of education with the publication of his book In Defense of a Liberal Education and a Washington Post op-ed piece entitled “Why America’s obsession with STEM education is dangerous.”[1] Frankly, I believe that Zakaria’s assertion that emphasizing STEM education is dangerous is deliberately over-the-top and most likely an attempt to garner publicity for his book. Let’s look at some of the arguments put forth by Zakaria. First of all, Zakaria builds a straw man argument that he intends to knock down. He writes:

“Every month, it seems, we hear about our children’s bad test scores in math and science — and about new initiatives from companies, universities or foundations to expand STEM courses (science, technology, engineering and math) and deemphasize the humanities. From President Obama on down, public officials have cautioned against pursuing degrees like art history, which are seen as expensive luxuries in today’s world. Republicans want to go several steps further and defund these kinds of majors. ‘Is it a vital interest of the state to have more anthropologists?’ asked Florida’s Gov. Rick Scott. ‘I don’t think so.’ America’s last bipartisan cause is this: A liberal education is irrelevant, and technical training is the new path forward. It is the only way, we are told, to ensure that Americans survive in an age defined by technology and shaped by global competition. The stakes could not be higher.”

Although I have made it clear in past articles that I disagree with the notion that a liberal education is irrelevant, I am nevertheless concerned that the math and science scores of U.S. children are not better. I believe that Zakaria sounds a bit too dismissive about that point. I do agree with Zakaria, however, that the stakes could not be higher in the debate about STEM education. Zakaria argues:

“This dismissal of broad-based learning, however, comes from a fundamental misreading of the facts — and puts America on a dangerously narrow path for the future. The United States has led the world in economic dynamism, innovation and entrepreneurship thanks to exactly the kind of teaching we are now told to defenestrate. A broad general education helps foster critical thinking and creativity. Exposure to a variety of fields produces synergy and cross fertilization. Yes, science and technology are crucial components of this education, but so are English and philosophy.”

Zakaria and I can certainly agree on a couple of points. First, we agree that critical thinking and creativity are important. We can also agree that cross fertilization of disciplines is one of the best ways to ensure that good solutions to difficult challenges can be achieved. Where we might have slight disagreement is about whether STEM subjects or humanities are the best way to teach critical thinking skills. Chad Orzel (@orzelc), an Associate Professor in the Department of Physics and Astronomy at Union College, believes as I do that the scientific method is all about critical thinking.[2] He writes:

As a proponent of STEM education, I believe that a problem-solving approach is one of the best ways to get young students interested in STEM subjects and to get them thinking critically. That’s why I, along with a few colleagues, founded The Project for STEM Competitiveness — to help get a project-based, problem-solving approach into schools. Does that mean that I don’t want students to learn English, history, or other liberal arts’ subjects. Of course not. The challenge, as I see it, is that, if STEM subjects are not stressed very early in a student’s education, children find it difficult to jump into STEM subjects later on. On this point, I am reminded of something that the late Herman Wouk once wrote about the importance of teaching children in his book This is My God. In Wouk’s case, he was writing about religious education, but the point he makes is important and has broader application. He wrote:

“I have heard people justify not training children in Judaism because, as they say, ‘We don’t want to warp them. When they grow up they can make their own choice.’ But this view dictates the most total warping they can condemn a child to. They warp him to a lifetime of rationalizing his ignorance. What adult sits down among the school children to learn the Hebrew alphabet, the Torah, and the ways of Jewry? It is the easiest thing in the world to drop one’s early religious training, as many of my readers know. It is sheer mountain-climbing to regain ground lost in childhood.”

Replace references to Judaism with references to STEM subjects and you have an argument I find compelling. Because math and science courses build upon each other, failing to stress them in early education means that the mountain students must later climb (if they want to pursue STEM subjects), are pushed higher each year. As Wouk concludes, eventually “it is sheer mountain-climbing to regain ground lost in childhood.” It is also true, as many readers know, that “it is the easiest thing in the world” to drop one’s early STEM training. Gary S. May, Dean of the Georgia Tech College of Engineering, can be counted among those who disagree with the thrust of Zakaria’s arguments. He writes, “The last few years have brought a call from some quarters to update the STEM acronym — for science, technology, engineering and mathematics — to STEAM, with the A standing for arts. On the surface, such a move seems harmless. What’s another letter, right? But in my view, STEM should stay just as it is, because education policy has yet to fully embrace the concept it represents — and that concept is more important than ever.”[3] In the end, May and Zakaria really don’t differ on much — except emphasis. May writes:

“No one — least of all me — is suggesting that STEM majors should not study the arts. The arts are a source of enlightenment and inspiration, and exposure to the arts broadens one’s perspective. Such a broad perspective is crucial to the creativity and critical thinking that is required for effective engineering design and innovation. The humanities fuel inquisitiveness and expansive thinking, providing the scientific mind with larger context and the potential to communicate better. The clear value of the arts would seem to make adding A to STEM a no-brainer. But when taken too far, this leads to the generic idea of a well-rounded education, which dilutes the essential need and focus for STEM.”

May goes on to argue that STEM subjects “have served as the spark to rekindle America’s commitment to an innovation economy” and that the reason that STEM education is being stressed is because students over the past few decades have been “less inclined” to pursue those subjects. On the other hand, Zakaria argues, “No matter how strong your math and science skills are, you still need to know how to learn, think and even write. … Innovation in business has always involved insights beyond technology.” While Zakaria fears that liberal arts education will decline, May is arguing that interest in the harder sciences has been slowly on the decline for years. May concludes, “I like to think of STEM the same way I think of stem cells — STEM is foundational. Just as stem cells are a platform for the growth of other tissues, STEM is a platform for many careers. It is too valuable to our nation’s future to be put at risk.”

My position is probably closer to May’s than Zakaria’s (i.e., STEM is a platform for many careers). Since most educators agree (as do I) that studying liberal arts is also important for students and for the nation, the brouhaha Zakaria is trying to stir up by insisting that it is dangerous to stress STEM education is really a tempest in a teapot. It appears that Zakaria’s target audience is not educators, but politicians (i.e., the people who hold the purse strings). Zakaria concludes, “Critical thinking is, in the end, the only way to protect American jobs.” I don’t disagree with that conclusion; however, I still believe that students will learn more and better critical thinking skills in STEM subjects than they will in the arts. But I do agree with Zakaria that without a good liberal education, those same students will be unable to explain with clarity the concepts they develop.