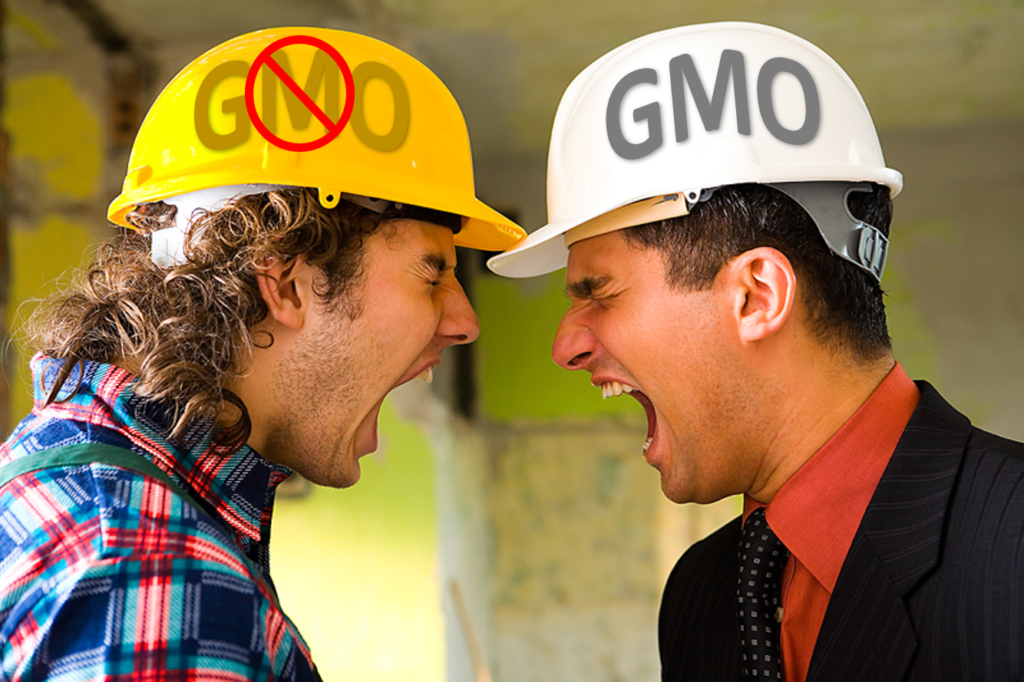 The GMO War of Words

The late controversial scientist and Nobel laureate Linus Pauling once stated, “Science is the search for truth — it is not a game in which one tries to beat his opponent, to do harm to others.” Yet, in today’s world, science is often ignored to strengthen political or personal prejudices. This phenomenon is not new. The late American philosopher William James observed, “A great many people think they are thinking when they are merely rearranging their prejudices.” He also noted, “There is nothing so absurd that it cannot be believed as truth if repeated often enough.” One area where science and prejudice seem to be colliding is in the area of genetically modified organisms (GMOs). The war of words heated up again when “the Philippines became the world’s first country to approve the commercial production of genetically modified ‘golden rice’ that experts hope will combat childhood blindness and save lives in the developing world.”[1]

This war of words has been ongoing for decades. Several years ago, journalist David H. Freedman (@dhfreedman) summed up the situation nicely. He wrote, “Proponents of genetically modified crops say the technology is the only way to feed a warming, increasingly populous world. Critics say we tamper with nature at our peril.”[2] He then asked, “Who is right?” There is no black and white answer to that question. Both proponents and opponents of GMO foods make some valid points. Demonstrating how contentious this area of science can be, Freedman interviewed two University of California, Los Angeles, professors — a GMO proponent and a GMO opponent. The proponent, Robert Goldberg, a plant molecular biologist, pointed to years of research and told Freedman, “Today we’re facing the same objections we faced 40 years ago.” On the other hand, David Williams, a cellular biologist, told Freedman, “A lot of naïve science has been involved in pushing this technology. Thirty years ago we didn’t know that when you throw any gene into a different genome, the genome reacts to it. But now anyone in this field knows the genome is not a static environment. Inserted genes can be transformed by several different means, and it can happen generations later.”

Each side of the GMO debate claims they are targets of vicious attacks. Williams told Freedman, “Biologists who point out health or other risks associated with GM crops — who merely report or defend experimental findings that imply there may be risks — find themselves the focus of vicious attacks on their credibility, which leads scientists who see problems with GM foods to keep quiet.” On the other hand, in 2015, the editorial staff at Nature Biotechnology reported activist organizations, like the US Right to Know (USRTK), have pestered scientists working the GMO field with freedom of information act requests and then “cherry-picked sentences from several thousand e-mails” to make character assassinations. They conclude, “This is how demagogues and anti-science zealots succeed: they extract a high cost for free speech; they coerce the informed into silence; they create hostile environments that threaten vibrant rare species with extinction.”[3] Finger-pointing and name-calling, however, rarely result in finding the truth.

What are GMO foods? Are They Safe?

Health and science writer Stacy Lu (@StacyLu88) explains, “Genetically modified organisms have genetic material that has been altered in a way that would not happen in nature if left to grow on its own. That’s because scientists take DNA for a specific desired trait from one organism, and insert it into another.”[3] She goes on to note, “GMO foods are engineered to be: 1) Hardier. Scientists insert a gene allowing the plant to survive weed killers that farmers use to kill invasive plants and fungi. This gives the crops a better chance to grow and makes farmer’s lives easier because they spend less time plowing and spraying pesticides everywhere. 2) Insect-resistant. Plants receive a gene from Bacillus thuringiensis (Bt), a bacteria that kills certain insects before they have a chance to damage a crop plant’s roots. This means farmers can use fewer pesticides and often have higher yields. About 82% of corn in the US uses Bt seeds. 3) Faster growing. Genetically modified salmon (not yet available for purchase) has a gene that makes it grow to maturity in half the time of wild salmon. This should make this healthy food more easily available. 4) Fresher. One variety of GMO apples doesn’t brown after slicing, which may help prevent food waste. In the US about 31% of all food goes wasted. 5) More nutritious. Golden Rice (not available for purchase) is a form of rice that helps prevent vitamin A deficiency, which can kill or blind children under the age of five, thanks to its higher vitamin A levels.”

With the world experiencing dramatic climate change and the future of food security in doubt, many scientists believe GMO foods can make food crops more sustainable and healthier. Jennifer Kahn, the narrative-program lead at the Graduate School of Journalism at the University of California, Berkeley, reports on a number of experimental efforts to address food security issues.[5] She also stresses the caution that needs to be used when modifying food crops. For the most part, however, the evidence indicates GMO foods are safe. Jon Entine (@JonEntine), a Senior Fellow at the Center for Health & Risk Communication and the Statistical Assessment Service (STATS) at George Mason University, writes, “Although there have been more than 2,000 studies documenting that biotechnology does not pose an unusual threat to human health and genetically modified foods are as safe or safer than conventional or organic foods, questions remain in the minds of many consumers.”[6]

Those questions are stoked by conspiracy theories and little evidence. Environmental writer Meredith Rosenberg (@meredithwanders) admits that almost all claims against GMOs are “unproven.” Nevertheless, she writes, “Though unproven, GMOs have been tied to everything from reduced fertility to cancer. GMOs are considered safe by the FDA, but long-term effects are still being studied, and these studies have only been performed on animals.”[7] These unproven claims are what has created the gap between scientists and the public. The Nature Biotechnology staff noted, “The views of the public and scientists on GM food are worlds apart: a Pew Research Center report in January 2015 showed that only 37% of the public believe that GM foods are safe (whereas 89% of scientists do). Anti-science activists want to maintain that gap.”

Why are some people so opposed to them?

Kahn notes, “Since their introduction in the mid-1990s, G.M.O.s have remained wildly unpopular with consumers, who see them as dubious tools of Big Ag, with potentially sinister impacts on both people and the environment. … Resistance to G.M.O. foods has only become more entrenched. The market for products certified to be non-G.M.O. has increased more than 70-fold since 2010, from roughly $350 million that year to $26 billion by 2018. There are now more than 55,000 products carrying the ‘Non-G.M.O. Project Verified’ label on their packaging. Nearly half of all U.S. shoppers say that they try not to buy G.M.O. foods, while a study by Jennifer Kuzma, a biochemist who is a director of the Genetic Engineering and Society Center at North Carolina State University, found that consumers will pay up to 20 percent more to avoid them.”

As Kahn notes, one of the most prevalent objections to GMO is the dominance of Big Ag. The US Right to Know organization insists, “Concerns about increasing corporate control of seeds, privatization of seed stock, and concentration of corporate power [are] at the center of the GMO debate.”[8] The concern is genuine and you hear it from farmers as well as anti-GMO groups. Nevertheless, USRTK is up to its old character assassination tricks. Kahn quotes Mark Lynas, an environmental writer and activist, who began his activism protesting Big Ag’s involvement in the area of GMO. Since then, he’s had a change of heart about other GMO efforts that have obvious health benefits. To counter his pro-GMO views, the USRTK writes, “We have compiled the critiques of Lynas. … He is a fellow with the Cornell Alliance for Science, a public relations campaign funded by the Gates Foundation to convince other countries, particularly in Africa, to accept GMO seeds and foods. In a recent Scientific American article, African food movement leaders asked Bill Gates to ‘stop telling Africans what kind of agriculture Africans need.’” If you can’t attack the message, attack the messenger.

Concerns about GMO foods need to be taken seriously; but, so do the studies showing that tested GMO foods are safe. Jim Paice, former food and farming minister in the UK, told conference participants back in 2014, “Genetic modification is at the heart of human progress and should be adopted to help combat issues surrounding scarcity of land to grow food on and the growing population.”[9] He added, “Science has been at the heart of human progress, it’s funny that we manage to welcome it when it cures or prevents an illness, but somehow when it is applied to food it conjures up grotesque images.” In today’s divisive political environment, we know science isn’t even welcome by everyone when it prevents disease. The Center for Accountability in Science concludes, “Nearly every major scientific and medical academy around the globe has proclaimed the safety of GMO foods. … Studies purporting to show the danger of GMOs have been quickly debunked by the wider scientific community. … Despite the wealth of reputable research on GMOs, activists and members of the media continue to claim that there is limited research into the effects of GMOs on health. … The views of anti-GMO activists are given nearly equal coverage by mainstream media, spreading doubts about GMO safety. Despite their lack of peer-reviewed, scientific evidence to support their claims, their positions are largely given equal footing with respected scientists.”[10] Do we need to be cautious? Absolutely. We need more science and we need to trust the science when the results are in. We can’t simply do what William James feared too many people do — think we are thinking when we are merely rearranging our prejudices.