Home » Independence Day » The American Revolution and the Supply Chain 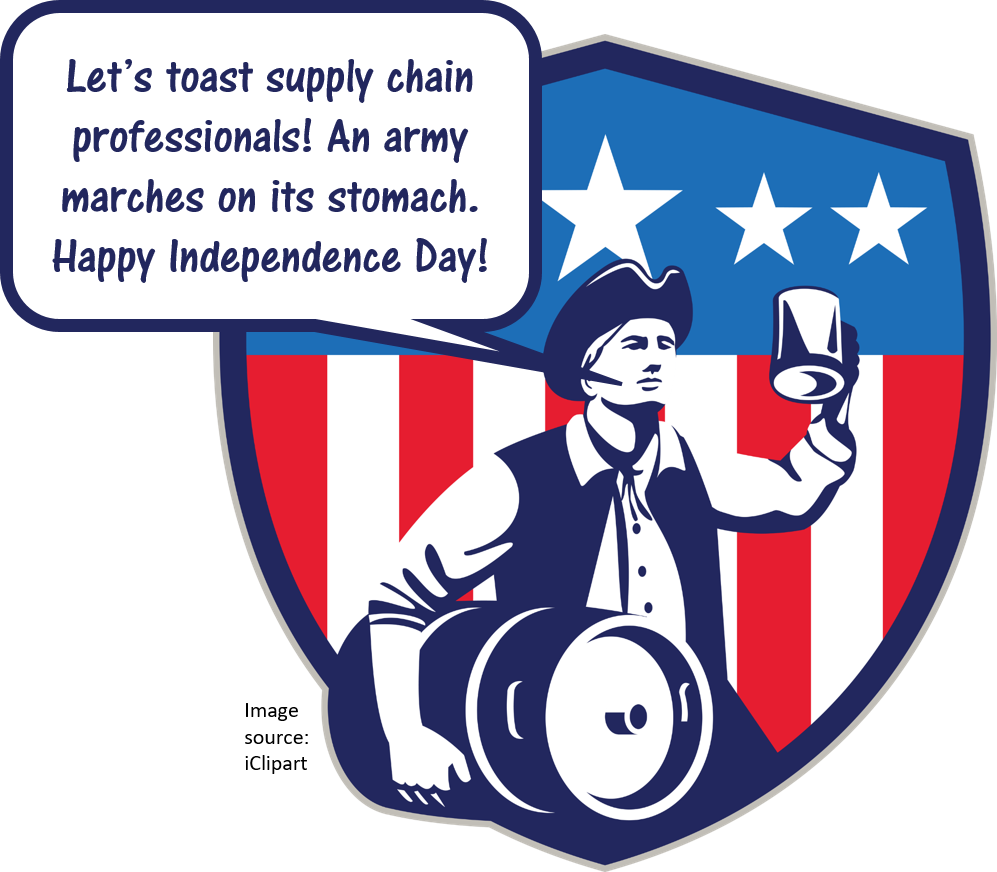 The American Revolution and the Supply Chain

Today in America, we commemorate the signing of the Declaration of Independence in 1776. The American Revolution left us with stories of heroism, betrayal, sacrifice, and struggle. Few people, however, think about the war for independence and the vital role played by the supply chain. The justification most often cited for the revolution is the unfairness of taxation without representation; or, as the Declaration states: “Imposing Taxes on us without our Consent.” If, however, the colonists’ list of grievances was written in prioritized order, restricting trade was a bigger grievance than taxing without representation. The Declaration laments, “The present King of Great Britain [King George III] … combined with others to subject [the colonies] to a jurisdiction foreign to our constitution, and unacknowledged by our laws; giving his Assent to their Acts of pretended Legislation.” One of those acts, and listed ahead of taxation, was “cutting off our Trade with all parts of the world.” Kelly Barner explains the Navigation Acts were at the heart of this grievance.[1] He writes:

“The Navigation Acts mandated that the Colonies’ only trade with Great Britain, only export their goods on British (or Colonist) ships, and pay duties to the King on any goods not imported from Great Britain. The Acts long predated revolutionary rumblings in the American Colonies, but through a policy called ‘salutary neglect’ they went largely unenforced before 1763, with Parliament believing that leaving the Colonies alone would allow them to flourish and give them less of a reason to challenge the Crown. Unfortunately for Great Britain, they started enforcing the Navigation Acts just as the American economy was reaching a point of maturity. If left to further its own evolution, they could have served as a source of competition to British Manufacturers. Although the Acts did not have a significant economic impact on businesses and households in the Colonies, they were sharply resented. Followed by the Sugar and Stamp Acts, which increased the taxes owed on goods imported from Great Britain, the net effect was felt most keenly by the Colonial business leaders who were also the most politically active … In fact, of the 56 Founding Fathers, 13 were merchants.”

It’s ironic today’s American political climate appears antithetical to free trade — one of the rights we fought to secure during the Revolutionary War.

Once the revolution commenced, trade and the supply chain continued to play an important role. From time immemorial, military leaders have recognized the importance of wartime logistics. In his 1858 volume entitled History of Friedrich the Second, Called Frederick the Great, historian Thomas Carlyle asserts the King was fond of saying, “An Army, like a serpent, goes upon its belly.” We now commonly hear the aphorism, “An army marches on its stomach” — meaning an army not well supplied soon grinds to a halt. General (and later President) George Washington understood his personal limitations in the area of logistics could negatively affect the outcome of the war. Historian John Ferling reports, “On the eve of the New York campaign in 1776, [Washington] confessed to Congress his ‘want of experience to move on a large scale’ and his ‘limited and contracted knowledge … in Military Matters’.”[2] Nevertheless, analysts from Derby Supply Chain Solutions note, “Few are aware of the integral role logistics played in America winning the war.”[3]

They point out that even though “the British logistics system was far more advanced and efficient” than the colonists’ logistics system, the shorter rebel supply chain was a differentiator. The British supply line stretched nearly 3000 miles across an often tempestuous ocean. Adding to the resupply challenge were regular confrontations with U.S. Navy warships and privateers. Delays and disruptions proved costly to the British. Derby analysts conclude, “Shortcomings in the [British] supply chain … ultimately contributed significantly to the British Army’s defeat. So this 4th of July, as you light the wicks of your firecrackers, give a little thanks to logistics. After all, if it weren’t for logistics, instead of blowing stuff up on this day, you have been attending a tea party.” Although the British had their challenges, so did the revolutionaries. Stories of hardship and hunger among American troops are well known. The U.S. did, however, have helpful allies. Ferling reports, “So much heavy clothing arrived from France at the beginning of the winter in 1779 that Washington was compelled to locate storage facilities for his surplus.”

Barner concludes, “Today’s supply chain managers are the intellectual and operational decedents of American Revolutionaries who understood the importance of a vibrant, global supply chain. They clearly understood that their fledgling nation would not succeed without being commercially vibrant, and so they positioned free trade as equally important to the right to a fair trial and the consent of the taxed. The work of procurement and supply chain professionals continues to make the world go around, just as it did [242] years ago: connecting people with finished goods and turning raw materials into desirable products.” As you salute the founding fathers, also give a nod to the quartermasters and supply chain professionals who played a role in winning America’s independence.