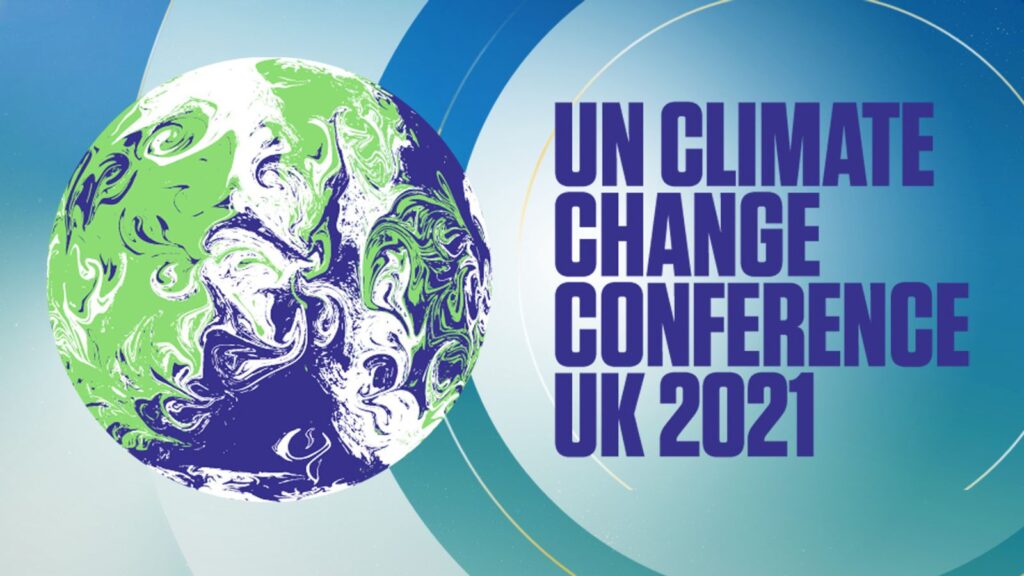 The 26th Conference of Parties (COP26) and Why It Matters

Everywhere you look people are being affected by changes in climate patterns. In August, Journalists Eric Roston (@eroston) and Akshat Rathi (@AkshatRathi) reported, “An epochal new report from the world’s top climate scientists warns that the planet will warm by 1.5° Celsius in the next two decades without drastic moves to eliminate greenhouse gas pollution. The finding from the United Nations-backed group throws a key goal of the Paris Agreement into danger as signs of climate change become apparent across every part of the world.”[1] United Nations Secretary-General António Guterres described the report as a “code red for humanity.” With time running out to take actions to divert the worst effects of climate change, environmentalists are looking to COP26 to see if words can be matched by actions. Journalist Ivana Kottasová (@IvanaKottasova) writes, “The COP26 international climate talks in Glasgow this November couldn’t come at a more crucial time.”[2] She adds, “This past year of deadly wildfires and floods in many parts of the world has left little doubt that climate change is here now, and is touching all corners of the Earth. … But there are signs of hope.”

Unfortunately, those “signs of hope” are, to date, found mostly in words not in actions. As journalist James Hitchings-Hales (@jameshh__) laments, “When you look at the history of the climate crisis, you can’t help but shake your head. This is not a new issue — the world has had too many chances to avoid the apocalyptic hellscapes of fireballs and ash clouds currently being seen across Turkey, Greece, China, and the US. From the first scientists to warn then-US President Lyndon Johnson about rising temperatures in 1965 to the inaugural, flawed international treaty in 1997 where governments first pledged to reduce greenhouse gases, leaders have been spoiled with opportunities for early action. Too often, these moments have been unduly wasted.”[3]

Kottasová explains, “COP is short for the Conference of the Parties to the UN Convention on Climate Change, which is an event that takes place annually, though it was postponed last year because of the pandemic. World leaders do attend, but a lot of the discussions take place among ministers and other high-level officials working on climate issues. The 26 signifies that this is the group’s 26th meeting.” This year’s COP is being held in Glasgow, Scotland, during the first twelve days of November. Having had 25 previous chances to make positive changes, why are some environmentalists more sanguine about the results of COP26? The last COP that resulted in anything close to positive action was COP21 held in Paris in 2015. “At the Paris COP,” explains environmental writer Molly Taft (@mollytaft), “192 countries came to an agreement to get the world off fossil fuels and to try and avoid, at maximum, 2 degrees Celsius (3.6 degrees Fahrenheit) of additional warming by the end of this century. The agreement sets an aspirational target of avoiding 1.5 degrees Celsius (2.7 degrees Fahrenheit) of warming as well thanks to the advocacy of small island nations. As part of the Paris Agreement, countries agreed to submit their own plans that would detail how much they plan to cut greenhouse gas emissions.”[4] Results have been mixed (i.e., disappointing) and former U.S. President Donald Trump pulled the U.S. out of the Paris Agreement. President Joe Biden reversed that decision — but valuable years have been lost.

One of the reasons countries talk the talk but don’t walk the walk about climate change is because different regions of the globe have different challenges. The staff at the Institute for Human Rights and Business (IHRB) explains that COP26 will be broken down into five regional groups: “African States, Asian States, Eastern European States, Latin American and Caribbean States, and the Western European and Other States — though these don’t really represent the substantive interests of parties.”[5] Where are the “substantive interests” discussed? According to the IHRB, the nitty-gritty is discussed in “many smaller groupings.” They note, “National delegations have self-organized into smaller blocs, most notably — Arab States, the Least Developed Countries, the Organization of Petroleum Exporting Countries (OPEC) group, the G77 group of developing countries, AILAC (Independent Alliance of Latin America and the Caribbean), the EU27 (European Union member states), and the BASIC (Brazil, South Africa, China, India).” The organizers of this year’s COP hope to “accelerate action towards the goals of the Paris Agreement and the UN Framework Convention on Climate Change”;[6] however, with so many competing agendas, it’s easy to remain skeptical.

In spite of the many challenges and roadblocks facing delegations at COP26, Kemal Derviş (@Kemal_Dervis), as Senior Fellow at the Brookings Institution, remains cautiously optimistic. He argues that advances in “green energy” have made it much more affordable and competitive with older carbon-based technologies. As a result, he writes, “national gains and commercial profit can now drive progress toward a green transformation. … In the past, technological constraints meant the net benefit in terms of GDP was negative. It is quickly becoming positive for many countries, making a green transformation increasingly feasible.”[7] His optimism, however, does not rest solely on cost-benefit considerations. He explains, “An important feature of the new climate narrative — not related to the economic cost-benefit analysis concerning mitigation — should facilitate the cooperative solutions that are still needed. This is the stronger support for ambitious climate policies, rooted in ethical considerations, from civil society around the world.”

Public will and political action don’t necessarily go hand-in-hand. Environmental correspondent Fiona Harvey (@fionaharvey) notes “[Chinese President Xi Jinping] announced last year that China would reach net zero emissions by 2060, a major step forward, and peak emissions by 2030. The latter pledge is regarded as insufficient, and could lead to the world breaching 1.5C. Analysts say China could cause emissions to peak by 2025, with some additional effort, and that this would be enough to keep the world on the right path. China is not the only country in the frame: major fossil fuel producers including Saudi Arabia, Russia and Australia have also refused to strengthen their commitments. Brazil’s Jair Bolsonaro is still presiding over the disastrous destruction of the Amazon. There are also question marks over the commitment of the new Japanese government. India was close to committing to net zero last spring but was overtaken by the Covid crisis; its rapidly growing economy and dependence on coal make it a key country at the talks, and other developing nations such as Indonesia, Malaysia, South Africa and Mexico will also be closely watched.”[8]

Because many national governments have been reluctant to act, government officials on a local level are being targeted for action. This is important because the world is becoming more urbanized. Executives at SmartCitiesWorld published an open letter ahead of COP26 pleading with city officials to adhere to 10 principles that highlight different aspects of urban life and environments that directly affect citizens and city authorities.[9] Those principles are:

1. Inclusion: “Including all citizens in decision-making drives the best results. The hallmarks of good city governance are participation, transparency, accountability and open data.”
2. Diversity: “Encouraging diversity is a key principle in fostering city-scale resilience and sustainability.”
3. Resilience: “Cities with a resilience strategy are better equipped to protect their citizens and environment from the worst effects of climate change.”
4. Wellbeing: “City strategies measured by wellbeing indices deliver better long-term outcomes than cities driven by economic measure alone.”
5. Green Spaces: “The cities that create and preserve green spaces for native trees and flora create bigger long-term resilience, wellbeing, and prosperity for their citizens and the bio-sphere.”
6. National Level Support: “Cities committing to net-zero targets and a ‘just transition’ should be actively encouraged and supported by national government programs to help nations achieve their ambitions.”
7. Infrastructure: “The best cities give citizens access to infrastructure that provides physical safety, clean sanitation, waste disposal, clean air, a renewable energy supply, digital connectivity.”
8. Systems Thinking: “Nations that equip leaders with systems thinking, including the ability to build on system synergies and circular economy principles, are most likely to meet their challenging net zero targets.”
9. Digital Technology: “Cities using secure digital technology to measure and manage activity across city-systems are more able to bring about effective local change than those without the data.”
10. Healthy Transport: “Prioritizing active transport, then public transport, then private transport is the way to go.”

The SmartCitiesWorld staff concludes, “Each principle is interconnected and interdependent, demonstrating the lengths that city authorities, backed by national governments, must go to in order to support the holistic and imperative climate action needed to prevent global disaster.”

We need to remember that actions taken today will improve the quality of life for generations to come. That’s why the globe’s youngest generations are the driving force behind changing public opinion. As Derviş notes, “For many, the preservation of the planet as we know it, including its species and biodiversity, is a near-absolute ethical imperative. A lot of people in green movements in developed countries not only support frontloaded mitigation at home but also seem ready to commit some of their income to finance the green transition in poorer countries. We don’t know exactly how many would be willing to give up how much, but climate ethics has become a significant political force, particularly among young people. This should help make possible the ambitious climate policies required, including the mobilization of resources for developing countries in support of early mitigation measures.” COP26 may provide us with a clear indication of how serious politicians are about confronting climate change.