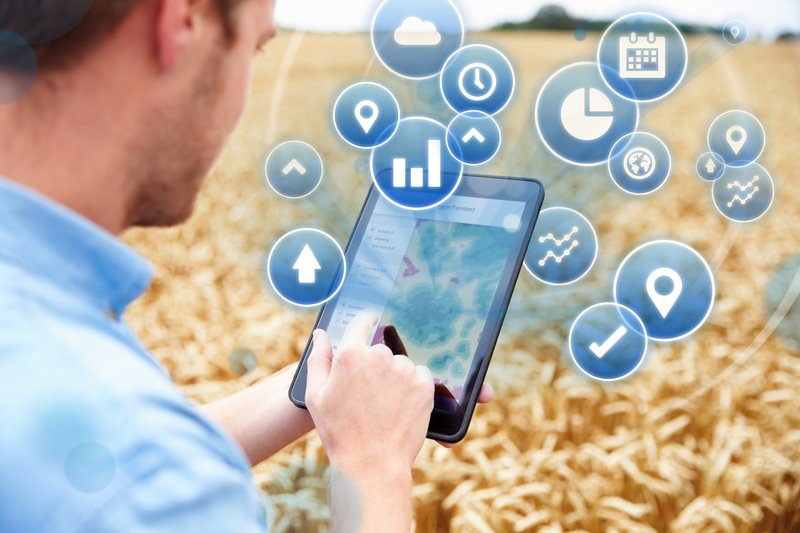 Most people have heard the term “Industry 4.0” used to describe the emerging fourth industrial revolution. Some experts are now referring to the technological revolution unfolding in agriculture as “Farming 4.0.” Lenore Newman (@DrLenoreNewman), the Canada Research Chair for Food Security and the Environment at the University of The Fraser Valley, and Evan Fraser (@Feeding9Billion), Director of the Arrell Food Institute and Professor in the Department of Geography, Environment and Geomatics at the University of Guelph, write, “The promise of this revolution is nothing short of miraculous, and proponents believe [new technology] tools will allow humanity to produce more food on less land, reduce waste and pollution, protect biodiversity and create jobs.”[1]

They worry, however, that the revolution will only be achieved when both rich and poor countries benefit from its results. “Experts caution,” they write, “that if history is anything to go by, technological revolutions typically result in greater inequality as the rich capture most of the benefits.” Analysts from the Boston Consulting Group (BCG) add, “Over the past decade, public and private sources have dedicated impressive amounts of energy and resources to digital agriculture in developing countries.”[2] They lament, “If only the impact on the lives and livelihoods of the more than 500 million smallholder farmers around the world were as large.” In Part 1 of this article, I discussed some of the background involved in the Farming 4.0 movement. In the concluding installments of the article, I want to discuss some of the technologies involved in Farming 4.0, beginning, in this installment, with the information technologies that form the foundation of Farming 4.0. In the conclusion of the article, I will take a deeper dive into a few of Farming 4.0’s more promising efforts.

The editorial team at Analytics Insight notes, “The technological revolution that is currently happening in the agricultural sector became possible, among other things, due to big data. Collecting and analyzing big data can not only improve the productivity of individual farms but also help halt a global food crisis. The significance of this lies in the growing need to produce more food while using less land for it. To reach this goal, policymakers and industry leaders seek assistance from technological innovations, including big data, IoT, analytics, and cloud computing.”[3] The analytics are most likely to be embedded in some type of cognitive technology (i.e., artificial intelligence).

Development experts Aloysius Uche Ordu (@Aloysiusordu), an Africa Growth Initiative Senior Fellow at the Brookings Institution, Larry Cooley, Nonresident Senior Fellow for Global Economy and Development at the Center for Universal Education, and Lesly Goh (@leslygoh), a Senior Technology Advisor at the World Bank, assert, “Importantly, the benefits go beyond increased yields: Given that digital technology holds particular appeal for younger workers, integrating it into agriculture through entry points like precision farming, equipment leasing, service provision, and e-commerce can address the major challenge of attracting job-seeking and entrepreneurial youth. Given that 70 percent of sub-Saharan Africa’s population is under 30 years of age, nowhere is the job creation challenge more acute.”[4] Below are some of the information technologies experts believe are driving the Farming 4.0 revolution.

The Analytics Insight editorial team notes, “Agribusinesses are becoming larger and more diverse, which results in the growing volumes of complex data that has to be managed constantly. This includes external data from social media, supplier network channels, and sensor/machine data from the field. This leads to the agricultural sphere transformation, opening new opportunities. Ultimately, smart farming and precision agriculture practices help farmers to save costs and open new business opportunities.” However, smart farming and precision agriculture practices only help if they are available and affordable. As discussed below, connectivity remains a challenge. Ordu and his associates assert, “Digitized agriculture data is creating network effects to drive scale. Coupled with the increasing embrace of the sharing economy, digitization and artificial intelligence make possible new business models and e-commerce platforms that connect farmers directly with markets, service providers, and aggregators, thereby shortening the value chain and increasing the profitability of smallholder farming.”

One of the big issues stalling better use of data is who owns the data. Farmers believe they should own any data generated on their farms whereas equipment manufacturers and other providers of agricultural resources believe they should have access to all data generated by their machines or data related to their products. Resolving that conundrum won’t be easy. One thing that is certain is that all that data is meaningless if it isn’t analyzed. The smarts in “smart farming” is supplied by advanced analytics often performed by cognitive computing platforms. To maximize the benefits of smart farming, a holistic view of the farm is required. Cognitive computing platforms can gather, integrate, and analyze all types of data and provide actionable insights. Just as importantly, they can communicate with users in plain language. As explained below, the Internet of things (IoT) will provide a central nervous system for the agricultural industry and cognitive computing will provide its brains.

Internet of Things and Cloud Computing

Adie Tomer (@AdieTomer), a fellow at the Brookings Institution, and Rob Puentes (@rpuentes), President & CEO of EnoTrans, bluntly state, “No industry or household in the world, will reach their future potential without access to broadband, it is the electricity of the 21st century.”[5] The agricultural industry is no exception. However, broadband connectivity remains unevenly available around the globe. Journalist Laura Villadiego (@lauravilladiego) reports, “According to a 2009 report by the United Nations Food and Agriculture Organization (FAO), a 70 per cent rise in overall food production will be needed to feed the estimated 9.1 billion people forecast to be living on the planet in 2050. New technologies may help many farmers escape poverty and provide people with cheaper food.”[6] That is, if those technologies can be accessed. Villadiego reports, “Less than 54 per cent of the world’s population has access to the internet, according to the International Telecommunications Union, the UN agency for ICT. And there are huge disparities between countries in the Global North and South. In developed countries, access reaches 86.6 per cent of the population, while in the least developed countries (LDCs) it is just 19 per cent.”

If connectivity and better equipment can be made more accessible, amazing results can be achieved. Journalist Peter Fretty (@pfretty) explains, “Today’s agricultural equipment essentially translates to smart factories on wheels including autonomous operation, sensor backed data collection as well as the innate ability to recognize and address potential issues on the fly. However, even with so many smart pieces of equipment, the real value comes from the amazing level of interconnectivity driving enhanced decision-making capabilities despite the many fluctuating factors farmers face such as weather, diseases or pests.”[7] The IoT, cognitive technologies, and connected equipment combine to enable precision agriculture. Making all the pieces available and affordable, however, isn’t going to be easy.

When a digital agricultural ecosystem is established, all of the data needs to be stored somewhere and normally it’s in the cloud. Maamar Ferkoun, the Asia-Pacific IBM Client Success Manager, notes, “There are practical applications for the use of cloud computing that create a whole ecosystem, from sensors and monitoring tools that collect soil data to agricultural field images and observations from human actors on the ground accurately feeding data repositories along with their GPS coordinates. As an example, sensors are now able to detect the location of a bale of hay in a field, as well as the amount of moisture it contains. Farmers can also use the cloud to access information from predictive analysis institutes, whereby they can have an accurate prediction on products that are in demand by different markets and adjust production accordingly. They are also able to have insight on weather conditions and other parameters affecting production.”[8]

Three things should be clear. First, new technologies create conditions for a new revolution in agricultural. Second, those technologies are neither cheap nor widely available in developing countries. And, finally, if the world’s 500 million smallholder farmers aren’t involved, the revolution will fail to meet its potential. In the final installment of this article, I will take a deeper dive into emerging Farming 4.0 opportunities and trends.