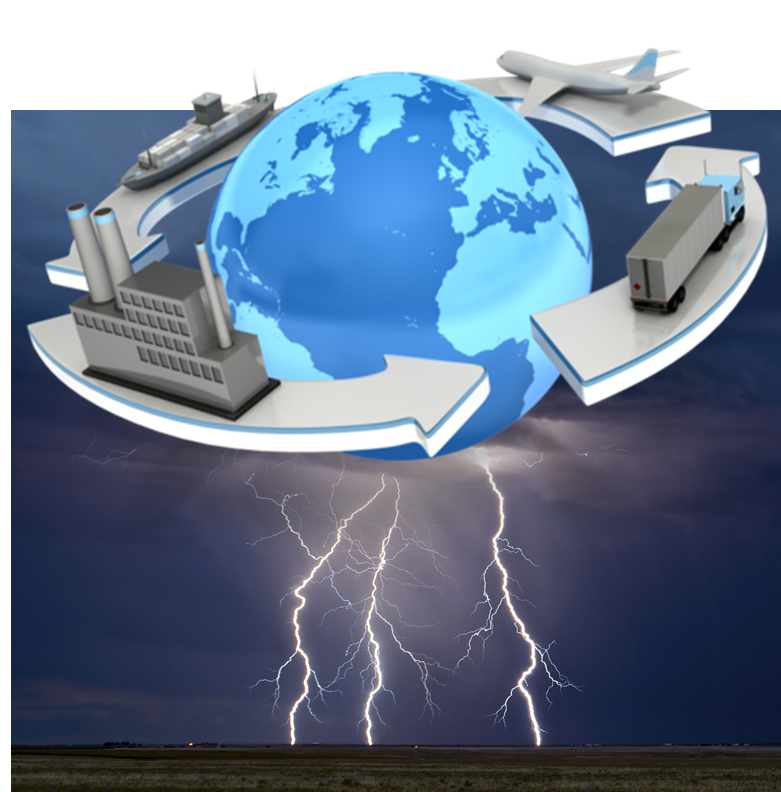 When David A. Bell wrote the hit tune “Stormy Weather,” he had love rather than supply chains on his mind. Nevertheless, supply chain risk managers could well be singing, “Life is bare, gloom and mis’ry everywhere. Stormy weather.” In the decades ahead, climate change is going to touch every one of our lives and, no matter how well prepared they are, businesses of all sizes are going to have to adjust their operations to mitigate its effects. The larger the geographic area involved in a business’ supply chain the greater the risk. In fact, Roman Kilisek writes, “Global supply chains could be headed for big trouble.”[1] This is not the first time I’ve written on this subject (see my article “Climate Change and Supply Chain Risk Management“); but, the topic is of growing significance and analysts keep warning companies that they need to prepare for the inevitable consequences of changing weather patterns. Kilisek’s article focuses on a report released earlier this year by CDP and Accenture entitled, “Supply Chain Sustainability Revealed: A Country Comparison – CDP Supply Chain Report 2014–15.” In the introduction to that report, Christiana Figueres, Executive Secretary of the UN Framework Convention on Climate Change, writes:

“Modern businesses depend on supply chains stretching around the globe. They appreciate that floods thousands of miles away, or drought striking a distant watershed, can make the difference between their own profit and loss. Forward-looking companies … also appreciate that successful, resilient suppliers are good for business. Suppliers that are better able to tackle sustainability challenges, such as climate change and water risk, are simply better business partners.”

Kilisek adds, “The CDP report puts in a nutshell why multinationals and their suppliers need to strive toward achieving sustainable supply chains: ‘Physical climate, regulatory and consumer preference changes expose supply chains to growing levels of climate risk. Uneven responses among suppliers present threats and opportunities for companies at the top of supply chains.'” How your company could be impacted by climate change depends, of course, upon what line of business it is in (i.e., agricultural companies will be impacted differently than manufacturing companies). Having said that, there is one factor that will have an impact on all businesses regardless of the sector in which they operate — the availability of water. Researchers from the Earth Institute at Columbia University and the Lamont-Doherty Earth Observatory predict, “During the second half of the 21st century, the U.S. Southwest and Great Plains will face persistent drought worse than anything seen in times ancient or modern, with the drying conditions ‘driven primarily’ by human-induced global warming.”[2] Even without the threat of unprecedented drought conditions hanging over their heads, businesses in every sector are going to have to compete with the water needs of a growing global population — especially in urban areas.

Dominic Basulto (@dominicbasulto) reports that, in order to deal with water issues, countries and companies are probably going have to adopt mitigation strategies that involve radical new water technologies. Even though many of those technologies are now far too expensive and speculative, Basulto writes they “may become more cost-effective and attractive by the time Dust Bowl II hits.”[3] Frankly, not all of the technologies discussed by Basulto are radical or strictly deal with water (like his first technology — the Internet of Things — and drones); but, combined they could make a significant impact on how companies deal with water issues in the decades ahead. Concerning the Internet of Things, he writes:

“The low-hanging fruit when it comes to water innovation is simply making the entire system of bringing water from source to market more efficient and effective. One way to manage and conserve water better is to hook up … water infrastructure to the Internet and enable real-time monitoring via sensors. Pipes, wells, treatment plants, just about anything can become smarter once it’s hooked up to the Internet. Loss management and loss detection then becomes much easier.”

The second technology discussed by Basulto are drones used for agriculture. He writes:

“You’ve heard the statistics — 80 percent of all water in the United States is consumed by the agricultural sector. No wonder, then, there’s been a focus on new ways of ensuring that all water within the agricultural sector gets used more efficiently. For example, Tal-Ya manufactures a polypropelyne tray that covers a plant’s root system, directing water and fertilizer directly to the root, while protecting the earth around the root from weeds and extreme temperature. Another company — CSS (California Safe Soil) — has developed a new process that helps to recover nutrients and water from discarded food and transform them into fertilizer for farms. One emerging trend is the use of unmanned drones to provide aerial imagery for farms, ranches and vineyards. With this imagery, farmers and growers get more data on their crops and can allocate their water resources more efficiently.”

The first exemption to use drones for crop spraying was recently issued by the FAA. Other exemptions are likely to be forthcoming. The third technology discussed by Basulto — desalination — is not new, but, the scale at which it may be needed would be unprecedented. He explains:

“Transforming salty seawater into drinkable water is an idea that makes intuitive sense, but it’s always been just so cost-prohibitive and energy-intensive to make it work. You might burn so many hydrocarbons doing this that you mess up the climate even more. As a result, only a handful of nations — including Saudi Arabia, China and Israel — have seriously explored massive seawater desalination projects.”

Obviously, for large-scale desalination to make sense, an environmentally-friendly and cost-effective way of powering new plants needs to be developed. Exacerbating the climate problem to produce water doesn’t make much sense. Nevertheless, since a majority of the world’s population lives within a few hundred miles of the world’s coastlines, pursuing this strategy with new research and development makes a lot of sense. The fourth technology discussed by Basulto is recycling water we already use. He explains:

“The idea of drinking ‘recycled’ water may strike many as being repulsive. … Singapore was an early pioneer of the whole ‘toilet to tap’ movement, and the technology appears to be becoming more and more mainstream — Singapore even markets its own recycled water the same way you might market a bottle of Evian. In Australia, BioGill’s ‘bioreactors’ that use bacteria to recycle wastewater are now deployed in tourist parks and resorts. California is a leader in getting behind this trend. The Delta Diablo Recycled Water Technology Pilot, currently being tested now in a partnership with Stanford researchers, is one example of how it might work in practice. In the United States, the technology use case for ‘bioreactors’ is still speculative, although the Pentagon has explored the options for using bacteria to transform sludge into drinkable water for its soldiers in Afghanistan and relief workers in Haiti.”

If the predicted megadroughts do come to pass, people will quickly get over any repulsion to recycling wastewater they might currently harbor. The fifth topic discussed by Basulto involves culture and behavior as much as it does technology. He elaborates:

“At a time when ‘paying the water bill’ is something that doesn’t seem ripe for innovation, there are actually a handful of U.S. companies that are working on designing new data-driven software solutions for urban water users. California has already experimented with ‘behavioral water efficiency’ techniques. In one scenario, water utility customers receive an individualized report on their water usage that compares how much they are using compared to their neighbors, and then gives recommendations on how to use less water. That reduces water demand, since nobody wants to be the neighborhood water hog. Push on this behavioral modification’ concept a bit, and you could imagine more extensive programs that fundamentally change the way people think about water.”

One quick way to change water-use behavior is to charge more for the water people use. Environmentalists have been insisting for years that we have undervalued water and have, therefore, never really asked users to pay the real cost of using it. The final technology discussed by Basulto is as much fiction as it is science at the moment. He explains:

“Ever since Beijing used cloud seeding techniques to prevent rainfall over the city during the 2008 Summer Olympics, people have been fascinated by the idea of ‘weather modification.’ China, in fact, was the first nation to create a Weather Modification Bureau. Currently, 24 countries practice some form of weather modification, including the United States, which has looked into ways to minimize the impact of hurricanes in the Gulf of Mexico. Based on that initial work, Bill Gates and Richard Branson have championed new geoengineering techniques that go well beyond changes to the local weather and start to impact the earth’s climate. Researchers from Harvard and Stanford have already proposed geoengineering concepts for the earth’s atmosphere. Some of the ideas for dealing with droughts, admittedly, sound like something out of a science fiction movie — flooding Death Valley with seawater via a canal from the Pacific Ocean or wrapping Greenland with blankets to capture freshwater ice. Yet, there are some examples, such as China’s massive ‘grand canals,’ that hint at how massive changes to the Earth may be the ultimate Hail Mary pass to bring water to parched regions.”

Although climate change brings drought to some areas, it brings flooding to others (and the pattern can change quickly — just ask flood victims in Texas and Oklahoma). That means that no single strategy for dealing with water issues (or other weather-related challenges) is going to be the ultimate solution. Companies need to look at each geographical region in which they operate and develop strategies for dealing with climate issues as conditions dictate. If they don’t, risk managers will continue to sing, “Life is bare, gloom and mis’ry everywhere.”