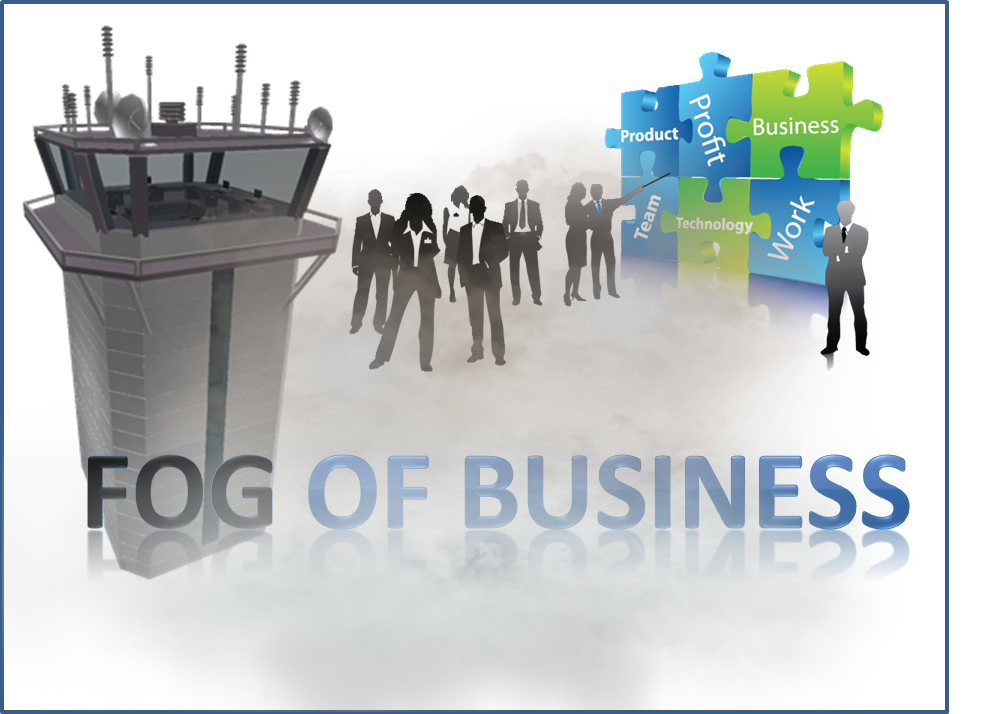 In his famous book On War, military strategist Carl von Clausewitz wrote, “War is the realm of uncertainty; three quarters of the factors on which action in war is based are wrapped in a fog of greater or lesser uncertainty. A sensitive and discriminating judgment is called for; a skilled intelligence to scent out the truth.” From that statement arose the term “Fog of War.” That phrase gave rise to a similar term — the Fog of Business — which emerged in the commercial world. Like military decisions made on the battlefield, many business decisions are based on uncertainty and require sensitive and discriminating judgment to scent out the truth. Ever since von Clausewitz introduced the fog of war notion, military leaders have tried to develop better ways to achieve situational awareness. In the business world situational awareness is often called business intelligence and/or supply chain visibility. Scott Nelson, Founder and CEO of Trax Technologies, writes, “The phrase ‘supply-chain visibility’ means many things.”[1] Focusing on the area of logistics, he explains:

“To some, it means knowing where in-transit goods are. To others, it means understanding how much an organization spends for logistics services — by business unit, department, product line, etc. To still others, it means understanding the operational performance of both inbound and outbound supply chains — by lane, customer, supplier (of goods and logistics services), product line, or product. All would agree that the goal of visibility is to provide insights that improve supply-chain operations and to provide reliable information to dependent groups, such as product managers or sales people, who make decisions intended to optimize margins.”

Lora Cecere (@lcecere), founder and CEO of Supply Chain Insights, believes, as minimum, supply chain visibility should include everything from a supplier’s supplier to a customer’s customer. Even if a company achieves that level of visibility, it may be insufficient in today’s commercial world where transparency is becoming a business imperative. Robert Handfield (@Robhandfield), a distinguished professor of supply chain management at North Carolina State, explains, “Many enterprises have limited or no visibility into their second-tier or third-tier suppliers, due to subcontracting activities that occur without their knowledge. Opaque supplier networks leave supply networks exposed to environmental or labor practices that are non-compliant with enterprise sustainability objectives and codes of conduct.”[2] And as many companies are learning, what you don’t know can hurt you. Handfield reports, “Increased risk to the brand, and associated financial impacts due to consumer reactions, has occurred in such cases. Wal-Mart, Nike, Gap, BP, Baxter, Apple, Aldi and others can attest to the dramatic impact of sustainability risks on their brand image and customers.”

Handfield asserts, “Globalization has created the emergence of sophisticated supplier networks, creating management challenges as exposure to volatility and complexity of global sourcing has emerged.” Several years ago, Ranjit Notani (@ranjit_notani), Chief Technology Officer at One Network Enterprises, wrote, “No doubt supply chains have become too complicated: a recent Gartner survey found that 85 percent of respondents felt that supply chain complexity is a significant and growing challenge for their operations. Where is this complexity coming from? The answer lies in today’s globalized, outsourced supply chains.”[3] Mike Greene, Vice President of Operations at Menlo Logistics, and Nick Caragher, the company’s Senior Director of Transportation, agree that globalization has increased the fog of business. “The challenge of managing complex global supply chains in an increasingly volatile business environment,” they write, “has companies searching for processes to make their supply chain more flexible and efficient.”[4]

To help cut through the fog of business, Greene and Caragher recommend companies establish supply chain control towers. “A solution that has been gaining momentum recently,” they explain, “is the transparent supply chain process referred to as Control Tower. [A] Control Tower acts as the supply chain nerve center, utilizing technology, organization and processes that capture product movement visibility from the supplier all the way to the customer.” Gary Allen, Vice President of Supply Chain Solutions for Ryder System Inc., adds, “Better supply chain visibility has become more than a ‘nice to have’ as executives recognize the importance of gauging a shipment’s current location, delivery times, inventory levels and how demands can be satisfied.”[5] Achieving better supply chain visibility is a challenge; but, worth the effort. “The benefits of logistics visibility and analytics,” Nelson writes, “are real and substantial.” He explains that achieving better visibility is challenging for two main reasons: “Process complexity and the low quality of data flowing through logistics processes.”

Until recently, some analysts have felt that the Control Tower concept has been more hype than reality. Notani wrote, “A supply chain control tower system is an attempt to make the outside supply chain environment visible to the enterprise, with ‘end-to-end’ visibility being the Holy Grail. Other supposed benefits include removing system latency, recording every transaction and event, and rapidly alerting planners of disruptions and deviations from demand and operations plans. But these can all really be thought of as various forms of visibility. The visibility that control towers provide supposedly reduces the amount of complexity that human planners face, allowing them to make better decisions.” You can’t help but notice Notani’s skeptical qualifiers: “attempt to make,” “supposed benefits,” and “supposedly.” That skepticism doesn’t arise because Notani is soured on the idea of a Control Tower. “Given today’s environment of complexity and risk,” he wrote, “it is no wonder that the control tower has been so appealing to the supply chain community.” But when he looked behind the curtain, Notani found an Oz-like architecture that was more smoke and mirrors than a real solution. He explained:

“The truth is that control towers offer a very limited form of visibility, emphasizing visibility into one part of the chain at the expense of another. At best, this means visibility across the internal departments of an enterprise combined with national sales and purchasing visibility into its immediate trading partners. This is because control towers create visibility by crudely stitching together multiple applications together with one-off connections that aren’t reusable, a time- and resource-intensive process. Given that today’s supply chains are made up of thousands of trading partners, each with their own incompatible systems, you can see why control tower projects stall long before providing the end-to-end visibility they promise.”

Since Notani made those observations, cognitive computing systems have emerged that have the potential to overcome some of the challenges companies face when trying to achieve supply chain visibility. Cognitive computing systems can ingest and integrate both structured and unstructured data. Through the use of natural language processing and ontologies, these cognitive systems can deal with many of the system incompatibilities discussed by Notani. Cognitive systems can also address another problem raised by Notani. He wrote:

“The second major limitation of a control tower [is that] it does nothing to change the fact that your enterprise is using separate systems for planning, execution and business intelligence. Thus, even when a control tower provides a timely alert about an issue somewhere else in the chain, a human planner must still evaluate the alert, translate its effect on the strategic, operating and execution plans, and determine the optimal response. This takes a lot of time and effort — meaning that at best the latency between detecting a discrepancy and taking corrective action will be a full week, and more likely several weeks or a month.”

Because cognitive computing systems can be embedded with rules that facilitate autonomous decision-making, planning, execution, and business intelligence can now be brought together and the latency described by Notani can be reduced or eliminated (Cecere calls this vision the “autonomous supply chain”). When anomalous situations arise, human decision makers can be automatically alerted in order to address the problem. My point is, for the first time, building a supply chain Control Tower capable of achieving the original vision is a possibility. It won’t be achieved overnight, but the goal is in sight.