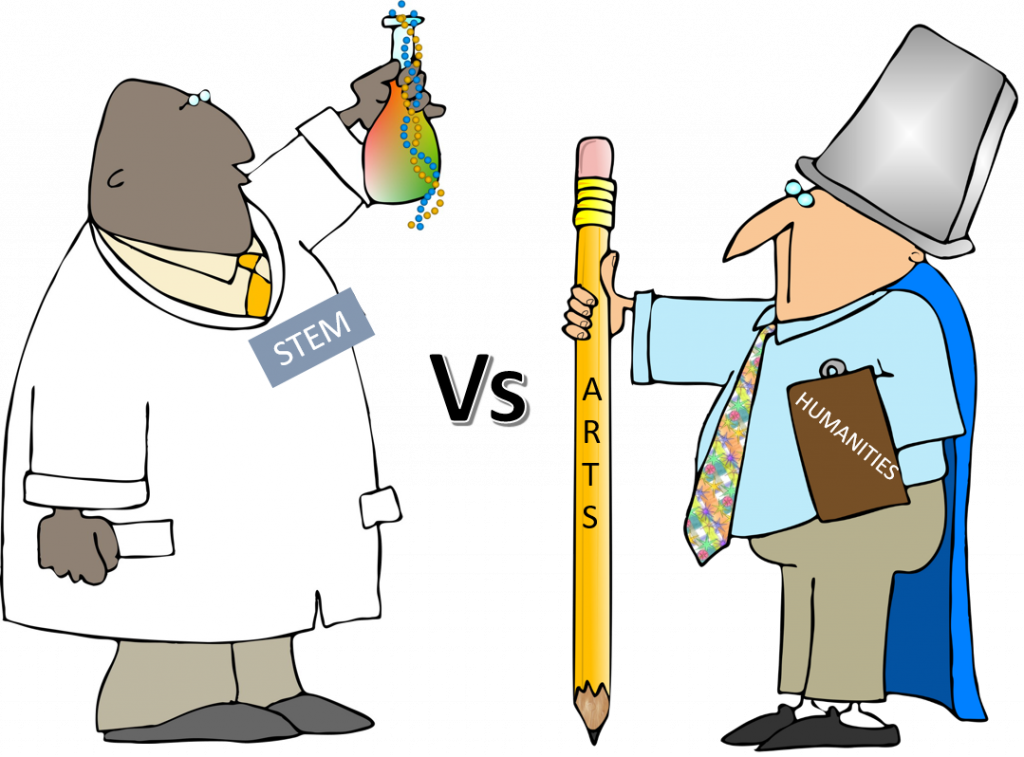 We seem to be living at time when the complexities of the world make us long for simplicity. People from politicians to preachers constantly present us with simplistic “this or that” choices as if life were black and white rather than myriad shades of gray. The same phenomenon is present is the field of education. Numerous articles tout the importance of science, technology, engineering, and mathematics (STEM) and, in doing so, ignore the importance of the arts and humanities. The current stress on STEM education has raised the hackles of arts and humanities educators who have begun to fight back. In a recent column, journalist Don Gale wrote, “I appreciate the importance of STEM education. I have more of it than 95 percent of the population (almost four years of pre-med biology, chemistry, physics and math), but STEM does not go far in solving our real problems.”[1] Really? That assertion will undoubtedly surprise scientists who working on improving peoples’ health, improving the world’s crops, and addressing disasters caused by climate change. Those seem like “real problems” don’t they?

Gale isn’t really dissing STEM subjects; he’s caught up in the backlash of people who believe the arts and humanities are suffering from the focus on STEM education. Gale explains, “We need increased education in humanities, arts and social sciences. STEM will get us to Mars. Humanities will help us get along with one another here on earth. We will survive whether or not we make the trip to Mars. The question is whether we will survive if we don’t learn to like one another, get along with one another, take care of one another and understand one another.” The dichotomy Gale sets up (STEM vs arts & humanities) is a false one. As Gale well knows, we need to be schooled in a number of subjects if we are to be well-rounded, functioning beings who contribute to making society better. The reason so much stress is placed on STEM subjects is that we live in a technological world requiring technical skills to continue functioning. Gale’s point, and one with which I agree, is that technology alone doesn’t guarantee humankind a peaceful and prosperous future. Gale undoubtedly looks at today’s political landscape and realizes technology hasn’t made people more civil. Like Jack Nicholson in “Mars Attacks,” he wants to know why we can’t all just get along.

Gale asserts, “We need folks trained to communicate, experienced in the arts of motivation and educated about the psychology of human learning. Life is not about science, technology, engineering or math. Life is about people and relationships. We must have more educational focus on life and living.” I agree we must focus on life and living; but, STEM is as much about life and living as any subject found in the arts and humanities. We need all of them. If there is a difference between proponents of STEM subjects and proponents of the arts and humanities, the difference is in perspective. STEM experts tend to focus on narrower and narrower slices of their areas of expertise while arts and humanities experts often focus on broad challenges facing humanity. I know that depiction is too simplistic; but, it helps explain why people like Gale don’t view STEM experts as solvers of real “human” problems.

Life is messy and Gale seems to believe STEM subjects don’t deal with messy things. “STEM education is easy,” he writes. “Two plus two is always four. Two atoms of hydrogen and one of oxygen always make water. A feather and a golf ball both fall at the same rates of acceleration (in a vacuum). A spinning coil in a magnetic field always generates electricity. Blocked blood vessels always cause heart attacks or strokes, depending on their location. That’s STEM. (Don’t insult me by citing the rare anomalies.) The challenge is to learn the rules or laws, understand them, and use them to improve the environment for living. On the other hand, laws of human behavior and interaction are never fixed. Every human being is different. Every human reaction is different. Every human emotion is different. The challenge is to learn how to accept the differences, how to interact with the differences, and how to transform the differences into positives for the whole of society.”

I’m sure scientists, technologists, engineers and mathematicians would like STEM to be all about rules and simple applications. Like other things in life, however, science is messy. Dominique Pestre, director of studies at the Ecole des Hautes Etudes en Sciences Sociales, Paris, bluntly states, “Science is a complex and messy business.”[2] Michael Brooks agrees. He writes, “Science in the real world … is messy, inconclusive and subject to revision. As Lord May, former chief scientific adviser to the government once said, science is best represented as ‘organized skepticism’ — and science’s results and conclusions have to be included in that skepticism. Science is not the arbiter of truth. All it can do is offer opinions about the answers to certain questions that we ask of nature. And it reserves the right to revise those opinions in the light of future discoveries. Even mathematics loses touch with any notion of truth once it steps into the real world.”[3]

Life’s messiness is what makes it so interesting. It’s also what makes studying STEM subjects and arts & humanities so interesting. I’m not trying to pick on Gale. He’s making an important point about education that needs to be addressed. And he’s not alone in his concerns. A few years ago, Robby Berman (@everyrobby) wrote, “If we emphasize STEM too much we may wind up with a generation that know how to do things, but not what to do.”[4] He added, “At all educational levels, schools are throwing everything they have at these areas of study. They’re pulling already-tight funds from everywhere else. K-12 music, arts, and phys-ed programs are under threat, as are humanities departments at the college level. People are starting to seriously wonder if this may end up producing students who are anything but well-rounded, fully-formed humans: We’re investing so much into developing the right side of our brains, we’re forgetting that it’s only half of what we have to work with.”

One way to address these concerns is get students involved in applying STEM subjects to real human problems. They need to take subjects out of the classroom and into the world. That’s one reason why I, along with a few colleagues, founded The Project for STEM Competitiveness — to help get a project-based, problem-solving approach into schools near where we live. Project-based learning helps students understand that STEM subjects are far from being cold, dispassionate topics. They have real application in helping improve people lives. Project-based learning also helps students learn to get along in team settings. The more students collaborate and cooperate the more life lessons they learn. We cannot make the mistake of thinking STEM subjects are better than subjects learned in the arts & humanities or vice versa. It’s a false dichotomy.