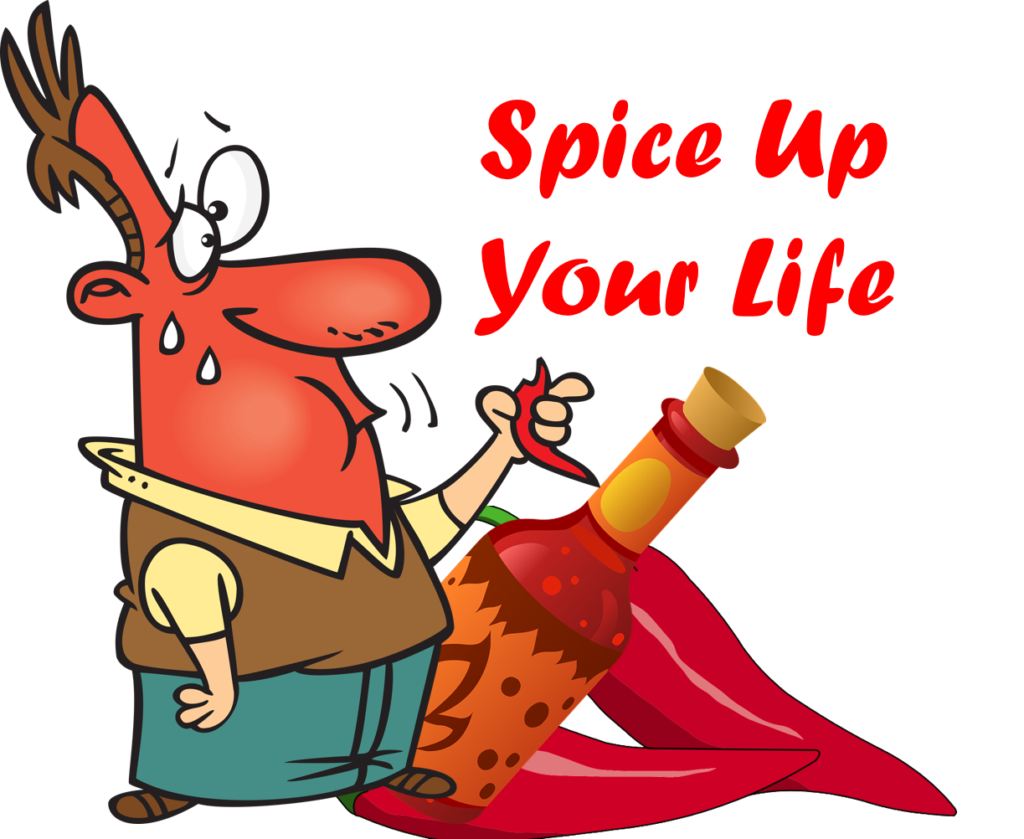 Spice Up Your (Long) Life with Spicy Food

Most people want to live longer and healthier lives. Spicing up your life might be just the ticket to reaching that goal. Nathan Seppa (@nathanseppa) reports, “Spicy food in the diet seems to contribute to longevity, a study of thousands of people in a Chinese registry finds.[1] He continues:

“Men who ate spicy food at least once a week were 10 percent less likely to die during the seven-year study period than were those with a more bland diet. Women had a mortality decrease of 12 to 22 percent during the study period with regular spicy food consumption, and eating it three or more times a week was associated with the biggest decrease.”

To be honest, the study was conducted on too small of a group to make sweeping claims — at least according to Lu Qi, one of the authors and a member of the faculty at the Harvard School of Public Health. “We know something about the beneficial effects of spicy foods,” he stated, “basically from animal studies and very small-sized human studies.”[2] Even without the health benefits, lots of people believe their culinary lives are much richer thanks to spices. “No matter how much it burns,” writes Marion Bernstein (@marionbwrites), “there is just something about spicy food that makes me always come back for more — and judging from the escalating Sriracha obsession, I’m going to safely assume that the masses are finally beginning to echo my fiery sentiments.”[3] According to Christian George Acevedo, the Chinese study isn’t the first to demonstrate the health benefits of spicy food.[4] “Earlier studies,” he writes, “have already been conducted concluding that the components of the spicy food, such as capsaicin, which is present in chili peppers, are potent in fighting against inflammation and in boosting metabolic rate, affecting positively on gut bacteria and even weight.” Bernstein reminds us that “spicy” isn’t really a taste (it represents flavoring). The latest research indicates that true tastes include salty, bitter, sweet, sour, umami, and fat. She explains:

“Even though we often say that something tastes spicy, the spiciness we’re experiencing isn’t actually a taste at all. Sweet, salty, bitter, sour, umami — these are tastes. Spiciness? That’s a different beast. You see, the spicy sensation you feel on your tongue actually comes from capsaicin, the molecule that gives hot peppers their heat. When eaten, capsaicin binds to receptors on your tongue that detect extreme temperature and pain. These receptors then carry a message to your brain saying that a.) your tongue is burning, and b.) it hurts. Your tongue feels like it’s on fire, because your brain actually thinks it’s on fire.”

Although Bernstein makes it sound like you are guilty of self-inflicted wounds when you eat spicy food, Celia Milne (@celiamilne) reports, “Research shows hot chili peppers actually protect the stomach lining and may prevent the gastric damage associated with anti-inflammatory painkillers. They are high in nutrients such as calcium plus vitamins A and C, and there’s some evidence that hot chilies can reduce cardiovascular disease risk, help prevent diabetes and boost metabolism. They may also have some ability to prevent cancer.”[5] She warns, however, “Just don’t go overboard: A Mexican study found people who ate the equivalent of nine to 25 jalapeños per day had a slightly raised risk of stomach cancer. (It shouldn’t be too tough for even hot-pepper lovers to stay under that limit!)” She goes on to discuss other studies that have shown that “capsaicin, which is responsible for the burning sensation chilies provide, can kill lung and pancreatic cancer cells without harming the surrounding cells” and “that adding chilies to meals may protect against the buildup of cholesterol in the blood.” Dr. Joseph Mercola (@mercola), an osteopathic physician, discusses a number of other studies that confirm the health benefits of spicy foods.[6] He writes:

“When hamsters ate food spiced up with capsaicinoids, their levels of LDL cholesterol declined, as did the plaque in their arteries. Capsaicin, one of the most studied capsaicinoids, in particular has also been linked to improved blood vessel function. One study revealed it stimulates TRPV1 (transient receptor potential vanilloid, a blood vessel receptor, that in turn promotes the release of nitric oxide and lowers blood pressure. It is through this activation of TRPV1 that capsaicin appears to exert many of its beneficial effects, as TRPV1 receptors are found in many tissues.”

In other words, all of these studies confirm an old adage used often in the military and in sports — no pain, no gain. Most healthcare professionals don’t seem to be recommending that you simply eat a bunch of chilies during the week; rather, adding spicy ingredients to your daily menu is a better way to get heat and health into your diet. One of the best ways I know of doing that (and doing it in way you will enjoy) is getting your personal tastes analyzed using McCormick’s FlavorPrint® app by Vivanda. FlavorPrint, is an analytics tool that produces a visual representation of a consumer’s tastes.” As anyone familiar with Enterra Solutions® knows, we played a major role in the development of FlavorPrint. Kim Nash (@knash99) explains:

“FlavorPrint starts with a 20-question quiz about food likes and dislikes, using an algorithm that learns over time as the user enters more data about product ratings and favorite shops and restaurants. Habits also figure in, such as preferences like eating light on weekdays. On the backend, the system analyzes the user’s data against McCormick’s research about food tastes, textures, aromas, preparation techniques and other factors. The software offers personalized suggestions about ingredients and dishes. FlavorPrint uses analytics tools from Apigee Corp. and a cognitive computing engine from Enterra Solutions, as well as homegrown tools and algorithms.”

The payoff, however, comes in the form of recipes personalized for your tastes. If you indicate you like spicy foods, then you’ll get the health benefits of spicy foods in recipes you’re sure to love. As the McCormick site declares, FlavorPrint provides “the personalization service that creates amazing food experiences for you — everyday, everywhere.” Dr. Susan Biali, a Vancouver general practitioner, told Milne, “Chilies add wonderful flavour and kick to foods, and have very few calories. Chili is a guilt-free way to make food more flavorful, interesting and exciting.” Go ahead; spice up your (long) life.