Donald Sheldon, president of D.H. Sheldon and Associates, told the staff at SupplyChainBrain that “competing successfully is all about providing the highest possible customer service with the least amount of resources.” [“Enhancing Competitiveness with S&OP,” 20 December 2011] Every company wants to compete successfully in the marketplace. Not every company, however, has a good sales and operations planning (S&OP) system in place. Sheldon claims that is a mistake.

“Sales and operations planning helps achieve that goal by bringing the best minds in a company to consensus on these two issues, he says. The whole idea behind S&OP is to align to demand as closely as possible with supply, says Sheldon. ‘A lot of companies feel that forecast accuracy is the whole point of S&OP, but it is not. The point is understanding the risks around the forecast going forward.’ Sheldon notes that companies that are ‘rocking and rolling’ in the market with high demand and a lot of new product introductions are the ones that have the hardest time with forecast accuracy – and yet they are also the most successful. ‘So the important thing is not absolute accuracy, but acknowledging the risks, or in the language of Six Sigma, to know the process variation.’ In fact, Sheldon says that ‘risk management’ is the best two-word description of S&OP. ‘If you think about critical risks, especially for manufacturers, things that come to mind are supplier failures, new product introductions and having to shut down a plant and move products to another area,’ says Sheldon. The best way to deal with these and, at the same time, keep shipments moving to customers is to focus on a 12-month rolling process that also has to align with a strategic plan that goes out two to three years.'”

Did you notice how often Sheldon talked about corporate alignment in that short discussion of S&OP? The importance of corporate alignment is one reason that some analysts would prefer to see S&OP called Integrated Business Planning (IBP). To read more about the on-going debate over what to call S&OP, see my post entitled Is S&OP a Guiding Light or a New Religion? Last year, Duncan Klett, vice president, analytics research, at Kinaxis, penned some thoughts about an article he read in Supply Chain Digest that posed the “question as to where Sales and Operations Planning (S&OP) might be going and do we need to move on to a more comprehensive concept called Integrated Business Planning (IBP)?” [“From S&OP to IBP — The Discussion Continues,” The 21st Century Supply Chain, 30 June 2011] Referring to a Gartner graphic used in the SCD article, Klett wrote:

“What I find most interesting in the Next Generation S&OP is implied, but not stated explicitly. That is that Integrated scenario analysis, Supply ‘what-if’ and Base supply plan (in nine-step S&OP) are replaced with Supply ‘what-If’, Financial ‘what-if’, base supply plan and base financial plans. What I believe is implied is that:

“The next generation approach will be much more interactive and integrated so that the financial and operational impacts from alternative demand or supply plans can all be considered (easily) in the S&OP process.”

Klett refines the Gartner graphic (shown below) to reflect his thinking about “the evolution of the development of an integrated consensus plan which addresses and balances the interests of demand, supply, and finance.” 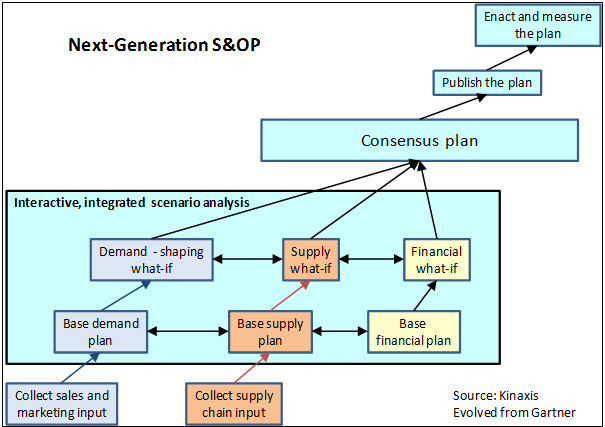 Klett’s “Next-Generation S&OP” process is contained within the large blue-shaded box. It’s important to note that you can’t get good outcomes on the far side of the S&OP process if don’t have good inputs on the near side. This is especially true in the era of big data. Klett concludes:

“In the ‘new world’, managers can see supply, demand and financial projections based on the current or potential supply and demand plans. By seeing the impact of change, they can develop a new ‘consensus plan’ which represents the best balance between competing objectives.”

I would insert the word “alignment” in place of the word “consensus.” Getting people to agree on a plan doesn’t necessarily mean that a company’s resources are aligned to implement it. Unless alignment is achieved, the plan won’t succeed. John Westerveld, a demo architect for Kinaxis, seems to agree with me on this point. He writes, “Sales and operations planning is all about alignment. It’s about getting the entire company pulling in the same direction.” [“Increase the effectiveness of the executive S&OP meeting – Part 1,” The 21st Century Supply Chain, 30 August 2011] He continues:

“To achieve [alignment], the executive team needs to:

“It is critical that the stakeholders are present for the executive S&OP meetings. At a minimum, the following are necessary for a successful executive S&OP meeting: CEO/general manager, Marketing, Sales, Operations, Finance. Depending on the company, you may also have need Engineering and HR. Many S&OP processes fail to get off the ground because the executives stop attending the meetings. This occurs for various reasons, but one of the key reasons is that the executive feels they aren’t getting value out of the process.”

Unless Westerveld believes that supply chain executives fall under one of the listed headings, I would assert that you need a supply expert in S&OP meetings as well. If, as more and more supply chain analysts insist, supply chains, not companies, compete, then a critical part of the puzzle is missing if a supply chain executive is not in the room. I agree with Westerveld that having all stakeholders present in such meetings is critical. This is especially true if analysts are correct in their assessment that a good S&OP process can provide a company a competitive edge. Westerveld goes on to offer some suggestions about how to make S&OP meetings more effective and valuable. In a second post on this topic , Westerveld writes, “The effectiveness of the executive S&OP meeting is limited by the capabilities of the tool used to present the plan. Many companies use Excel to drive the S&OP meeting, but is that the best tool?” [“Increase the effectiveness of the executive S&OP meeting – Part 2,” 31 August 2011] Westerveld isn’t the first analyst to lament the fact that many S&OP processes are still Excel based. That’s not a rap against Excel, which is a fine product; it’s simply an indication that analysts believe that S&OP needs more refined tools to enrich the program so that it can reach its full potential. Westerveld offers “a quick look at what is needed to effectively present the S&OP plan to the executive team.”

“1) If there is one thing to remember it’s that the executive team is very busy and [doesn’t] have the patience or the time to try to understand mounds of data. [Team members] need the issues and resolutions laid out clearly and visually, with supporting data at hand if necessary. As we’ve all seen, a picture is worth a thousand words (or a thousand columns of numbers) so make sure that the presentation software supports multiple charting modes.

“2) When we change the demand plan, make supply changes, set constraint levels, we base these changes on a set of assumptions. These assumptions must be captured and presented to the executive S&OP team so that they understand the assumptions that these plans are based on. Hopefully, the executives will confirm the assumptions made, but it is possible that the executive team may disagree with an assumption (or simply have better information). It’s much better to make this discovery before you execute the plan.

“3) Often, an executive will need to look at the next level of detail in order to better understand an issue or opportunity. If the information isn’t at hand, the team may not be able to make a decision, or if [it does, it] may be making the decision based on incomplete data. Neither situation is good. Make sure that the tool you use to present the S&OP meeting includes the ability to drill down through multiple levels of detail, so that you have the answers when your executive team asks.

“4) In many cases, the pre-S&OP team will present a recommended S&OP plan, but may have alternative resolutions for discussions. This means that the executive team needs to be able to clearly see the differences between the various resolution alternatives against the key corporate metrics so that they can make an informed decision.”

I would recommend that a pre-S&OP team always prepare a draft S&OP plan. Not only does this give the executive team a head start on the process, it focuses discussions in a meaningful way. Without a plan, there is always a chance that turf wars can break out. You don’t want departments criticizing each other. By having a plan on the table, constructive criticism can be aimed at the plan instead of at each other. The better the information, the tools, and the plan, the more effective the process will be. The more effective the process the greater the competitive edge it can provide.