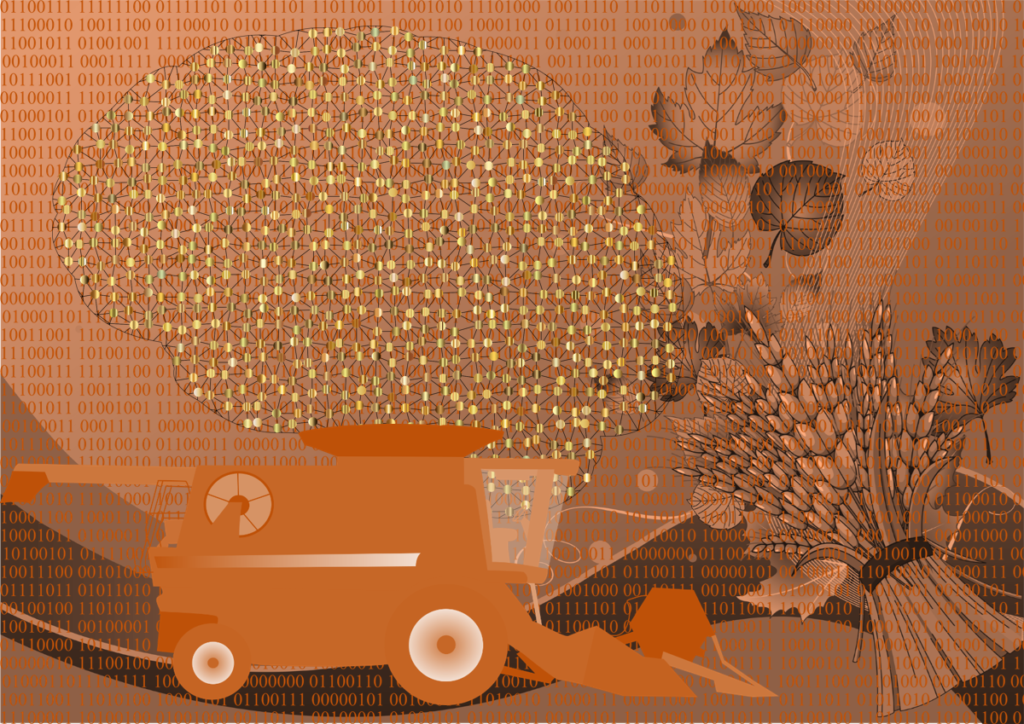 It’s no secret that world’s population continues to grow and isn’t predicted to top out for several decades. All of those new mouths need to be fed making food security one of humanity’s most pressing issues. The answer may be smart farming. Rod Snyder (@RodSnyderWV), President of Field to Market, explains the challenge ahead. “Producing enough food, fiber and fuel for more than 9 billion people by 2050, while conserving natural resources is a challenge that has become increasingly complex,” he writes. “In the next 35 years, experts predict that we’ll need to double agricultural production to keep pace with population growth, changing diets and increasing demand. And farmers will have to meet this challenge in the face of a changing climate with increasingly extreme weather patterns.”[1] Another factor affecting the agricultural sector is urbanization, which means fewer farmers are trying to feed more people. Still another trend, converting forests into farmland, is unsustainable. Breakthrough Institute executives, Linus Blomqvist (@linusblomqvist) and David Douglas, explain, “If farmland continues to grow over the next several decades, the consequences for habitats and wildlife would be dire. As such, slowing, halting, and eventually reversing the growth in agricultural area must be a top priority — perhaps the top priority — for global conservation.” [2] The agriculture community is resting its hopes on technology to meet all of these challenges. Smart farming requires a number of complementary technologies to come together in order to be successful.

The sine qua non for smart farming is big data. Reporters from The Register explain, “Tech startups working on innovations in the agricultural sector (‘agritech’) — have already started to show us a bit of what big data looks like when it comes down to Earth. Perth startup Agworld and Melbourne startup The Yield both offer farmers an analysis of their fields, generating a plan to managing those fields on a meter-by-meter basis. Farmers can know exactly how to manage each area to achieve maximum output from minimized inputs — and presumably will soon be able to program their farm robots to tend those fields according to those results.”[3] What they are describing is often called precision farming (or prescriptive planting), which is part of the smart farming movement. Precision farming relies three foundational technologies: sensors; the Internet of Things (IoT); and advanced analytics (often provided by cognitive computing). Robotics and automation are other technologies likely play a large future role in agriculture.

The Economist notes, “Farmers can be among the most hidebound of managers, so it is no surprise that they are nervous about a new idea called prescriptive planting, which is set to disrupt their business. In essence, it is a system that tells them with great precision which seeds to plant and how to cultivate them in each patch of land. It could be the biggest change to agriculture in rich countries since genetically modified crops. And it is proving nearly as controversial, since it raises profound questions about who owns the information on which the service is based. It also plunges stick-in-the-mud farmers into an unfamiliar world of ‘big data’ and privacy battles.”[4] Eliot Brown (@eliotwb) reports big data’s agricultural potential has been slow developing. He writes, “For farmers — and the tech companies that want them as customers — data has been a disappointment. A few years ago, the agricultural world was full of promises about how the widespread use of data was going to change farming. Companies sprang up that offered to collect huge amounts of information about everything from weather patterns to the soil on farms to the health of crops. The sales pitch: With all this detailed information, farmers would get untold insights into what was happening on their land. And they could use that information to boost production. But the revolution has been slow to catch on. Many farmers who used the digital services found it difficult to digest the mountains of information and figure out how to put it to use. Many others simply weren’t sold on the idea, or couldn’t afford the investment as crop prices fell.”[5] Since much of the world’s food is grown by poor farmers in developing countries, access to and affordability of technology will remain a challenge. Even so, the general principle behind precision farming remains sound. The more information a farmer knows about his land the more productive he should be able to make it.

Jennifer Kite-Powell (@jennalee) writes, “We need new ways to grow food that are smarter and helps regulate our use of land, water and energy in order to feed the planet and avoid a global food crisis.”[6] In order to do that farmers and the companies supporting them, need data. Data, of course, is not magically generated. It comes from sensors measuring variables affecting all aspects of agriculture — from soil nutrients to weather patterns. Brown notes, “Farmers have been deluged with data coming from countless sources, from soil sensors to outer space.” There is no single best way for sensors to collect data. As Brown noted, some sensors are found in space. Other sensors can be stuck in the ground, or placed on drones, or mounted on poles. Kite-Powell reports scientists from Carnegie-Mellon University are mounting sensors on robots. George Kantor, a Senior CMU Systems Scientist, told her, “Robots can gather data in agricultural fields with an unprecedented level of accuracy and timeliness that can be used to help solve the world’s looming food crisis. A mobile field robot can gather information that can be used to help growers make better management decisions that allows them to grow more, higher quality food with fewer land and water resources. They can even help crop breeders, produce higher-yielding crops faster.”

The data coming from sensors is being transmitted over the IoT. That data can be used to control watering on a farm, tell a sowing machine which seed to plant, or optimize power usage on a farm. Any data generated by a machine and transmitted elsewhere for analysis will use the IoT. Andrew Meola (@AMeolaTheStreet) explains, “The IoT is set to push the future of farming to the next level. Smart agriculture is already becoming more commonplace among farmers, and high tech farming is quickly becoming the standard thanks to agricultural drones and sensors.”[7] He adds, “Sensors placed in fields allow farmers to obtain detailed maps of both the topography and resources in the area, as well as variables such as acidity and temperature of the soil. They can also access climate forecasts to predict weather patterns in the coming days and weeks. Farmers can use their smartphones to remotely monitor their equipment, crops, and livestock, as well as obtain stats on their livestock feeding and produce. They can even use this technology to run statistical predictions for their crops and livestock.” All of this activity flows through the IoT.

In the human body, inputs from our five senses transmitted through out nervous systems into brains are important because they allow our organs and appendages to function properly depending on those inputs. The human body is a good analogy to the smart farm. In future, the organs and appendages of a smart farm are likely to be automated machinery and robots. I’ve already discussed robotic sensors. There are other robots being developed as well. Robots are being developed to care for plants and even harvest crops. Some of the most difficult tasks to automate is harvesting orchard crops. Companies are even working on that challenge.[8]

The world doesn’t have many growing seasons left to figure out to feed a growing and hungry population. All of the technologies discussed above need to play a part in meeting the challenge. Scientists are becoming more sanguine each year that the challenge can be met with the help of technologies. The question that remains is whether these technologies will be affordable enough to help small farmers in developing nations. They are food providers for much of the world’s population and they need as much help as large agribusinesses to feed the world.