Back in July I wrote a post entitled Stormy Seas Seem to Be Calming for Shipping Lines. I concluded that post with these observations: “The global maritime shipping industry is like a canary in a mine when it comes to determining the relative health of the global economy. Fortunately, the once sick canary looks to be on the mend.” Although I did read that shipping capacity is still increasing faster than demand, things continue to look promising for shipping lines [“Sharp upturn in use of shipping containers,” by Robert Wright, Financial Times, 19 August 2010]. Wright reports:

“The use of shipping containers, a barometer of the global economy, has risen sharply this year, surpassing even the record levels of 2008. Two of the most important companies in container trade – Denmark’s AP Møller-Maersk and Dubai’s DP World – yesterday [18 August] reported further evidence of the recovery in the trade in the boxes that carry the world’s manufactured goods. The upturn, boosted by traffic of goods to and from emerging economies, has been so strong that analysts say that it has caught many by surprise. Maersk, owner of Maersk Line, much the world’s largest container carrier, said volumes on long-distance routes served by its ships had been up 13 per cent in the first half this year compared with last. Transpacific services between Asia and North America saw an 11 per cent increase, while services to and from Latin America saw an 18 per cent improvement. DP World container movements at its ports were up 7 per cent in the first half over the same period last year. Its Australia and Americas division, which includes Latin America, saw volumes up 31 per cent on last year.”

Wright reports that other companies are also releasing impressive numbers. Singapore’s Neptune Orient Lines, for example, “announced its volumes in the year to July 23 were 35 per cent up on the same period of 2009.” The volume has been so strong and so unexpected “that Maersk and several other lines have already had to apologize to customers for running out of containers after ordering too few to cope.” All of this is good news for a sector that was hit hard during the recession.

“What is the breakdown of total container movements by major shipping lane or theater? We must confess to not knowing, until we saw this graphic in a recent excellent analysis of the ocean shipping market by container leasing company Sea-Axis. … As can be seen from the graphic, intra-Asian movement by far dominates in terms of container traffic in defined lanes (besides the “Other category”), at nearly 32% of the global total. This is a reflection of the combination of the rapid growth in Asian economies and the movement of components to support finished goods production before final shipping to the US and Europe. Traffic from Asia to the North America comes in second place, but well behind at 13.5%, just ahead of Asia to Europe lanes at 12.3% of the total. Perhaps surprisingly, Trans-Altantic container volumes in both directions between the US and Europe are in last place, representing just 4.2% of the world total TEU movement.” 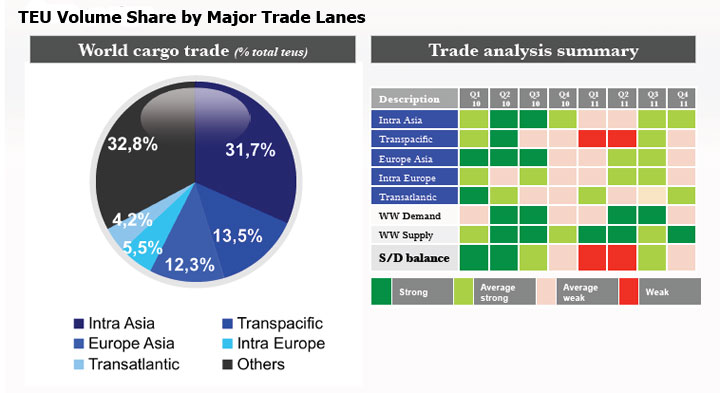 Since Asia is leading the way out of the current recession, it is not surprising that most of the shipping traffic is supporting that recovery. The inter-Asian business is so strong that Evergreen Line just announced the expansion of its services in that area [“Evergreen Line will Launch JVT Service to Improve Intra-Asia Routes,” Evergreen Line press release, 20 August 2010]. The release reports:

In a companion article, Robert Wright expands his report on the state of the container shipping industry [“The container industry’s ship comes in,” Financial Times, 19 August 2010]. He reports that “a strong recovery is under way but it is unclear how long it will last.” He writes:

“The deep, steep-sided sea inlet of Loch Striven, on The Firth of Clyde on Scotland’s west coast, was the scene this summer of a remarkable illustration of the speed of the container shipping industry’s turn-round. The loch had been home since July last year to a group of six, lashed-together idle container ships owned by Maersk Line, much the world’s largest container shipping line. Five of the ships had such high top speeds, and consumed such huge amounts of fuel, that container shipping’s deepest slump looked set to keep them out of use almost indefinitely. Yet by June booming trade volumes had made the need for the ships so acute that tugs came to separate the idle vessels. They slipped one by one out of the loch in June and July and back into service. Similar scenes have been seen in the scores of other rivers and inlets that, in the depth of the sector’s crisis, were home to more than 12 per cent of the world’s container ship capacity. Only 1.7 per cent of the world’s fleet is now laid up, according to Paris-based AXS-Alphaliner, a shipping consultancy.”

Although Sea-Axis predicts that ocean shipping capacity will strongly exceed global demand, the fact that most of the existing capacity is being used remains good news. Wright continues:

“Denmark’s AP Møller-Maersk, Maersk Line’s parent, announced it now expected 2010 to be its best year since 2004, when the container shipping boom was at its height. Dubai’s DP World, one of the biggest container terminal operators, announced that container volumes grew by 7 per cent in the first half, while net profits, adjusted for the effects of exceptional gains, rose by 10 per cent. The question is how long this unexpected recovery will last and what kind of container shipping industry will emerge.”

Several years ago, the shipping industry was caught up in an unrealistic exuberance that saw shipping lines place large numbers of orders for new ships. Their timing was bad, however, since the Great Recession soon proved disastrous for the shipping industry as capacities grew and demand evaporated. Shipping lines are trying to be more realistic this time around. Wright continues:

“Kim Fejfer, chief executive of APM Terminals, Maersk’s port operating company, says container lines are once again planning sensibly for the future after periods last year when short-term desperation took over. ‘You’re seeing a swing back to normality,’ he says. The most obvious cause of the industry’s recovery is the simple improvement in volumes of containers moving amid an improving world economy. Singapore’s Neptune Orient Lines, operator of the world’s sixth-largest container ship fleet, … announced that container volumes so far this year were up by 35 per cent on that of last year.”

Nevertheless, amid all the good news Wright is being very cautious about the current recovery. He reports that “few lines believe the recovery will continue at the present rate.” He explains:

“Many attributed the initial surge in February to companies’ restocking after running down inventories last year. Mark Page, research director for London-based Drewry Shipping Consultants, doubts that figures later this year will show continued growth. ‘The volumes are not necessarily continuing to go up quarter on quarter,’ he says. Lines are nevertheless seeing the benefit of an extraordinary series of steps they took to slow the plummeting rates they could charge for moving containers. While most have stopped the laying up of excess ships, nearly all are still running ships slowly, a step that both saves fuel and soaks up extra ship capacity. More ships are needed to provide each regular service. The shortage of capacity means that, as lines carry more containers, space on ships is growing scarcer and lines can charge customers more. Neptune Orient Lines said the average rate it charged to move a standard container was 39 per cent higher in July this year than in the same period in 2009. ‘Now you’re seeing the benefits of all the capacity withdrawals and lay-ups,’ Mr Page says. However, even if volumes and rates stay strong, many lines still bear scars from the wounds of last year’s first-ever year-on-year fall in container volumes. France’s CMA CGM, the world’s third-largest container line, is still looking for an investor to provide the capital it needs to fund huge orders of large, expensive ships it placed during the industry’s boom. Other lines, including Israel’s Zim Line, have had huge bail-outs during the last year. Lines that have avoided such significant problems are likely to be far more competitive in future than the wounded companies, Mr Fejfer predicts. That is likely to favour companies with significant resources from parents and those, like Taiwan’s Evergreen, that declined to order excessive ships during the boom. ‘I think those that have the strongest balance sheets and are long-term dedicated to the industry … are those that will win in the future,’ Mr Fejfer says”

In another sign that the economy is recovering, Maersk Line plans on increasing the amount of shipping it offers between Asia and emerging markets in Africa and Latin America [“Maersk charts new path to growth,” by Robert Wright, Financial Times, 26 September 2010]. Wright reports:

“The world’s largest container shipping line is serving more parts of Africa and Latin America with ships sailing directly from Asia, as accelerating growth in emerging economies redraws the traditional world shipping map. Eivind Kolding, chief executive of Denmark’s Maersk Line, said many of the ships it had on order over the next two years were designed to meet growing African and Latin American demand for the manufactured and other goods it carried. Like most container lines, Maersk previously focused predominantly on moving goods from Asia to Europe and North America, serving Africa and Latin America mainly by ‘feeder’ ships shuttling to and from major ports on the main routes.”

If shipping is a “canary in the mine” monitoring the health of the global economy, its immediate future looks a lot better than it did a year ago. I suspect that the pain of the last couple of years will keep exuberance in check over the next couple of years and that shippers will be cautious as they plan for the future. In fact, Maersk’s Chief Executive indicates that “in the short term slowing demand growth would mean Maersk Line would remove some ships from service. ‘There will simply be too much capacity in the market, so our response is that we take out some capacity from the start of October,’ [Eivind Kolding] said.” Even so, things are looking much better in the shipping industry.