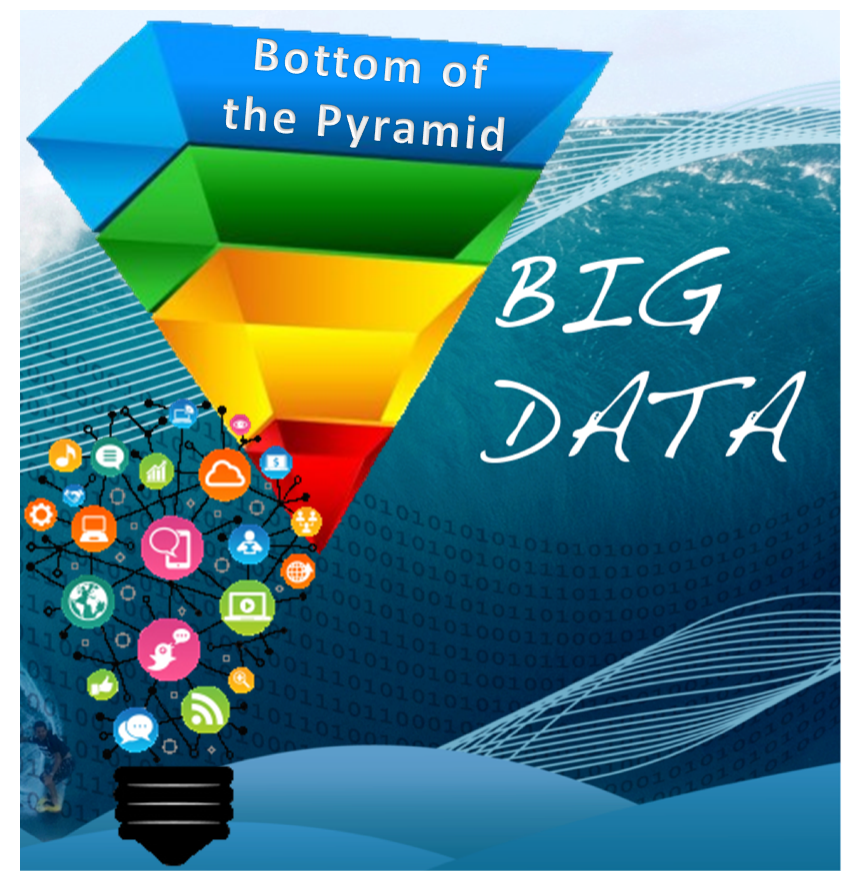 Serving the Bottom of the Pyramid using Big Data and Innovation

“In his seminal work, The Fortune at the Bottom of the Pyramid,” writes Amitava Chattopadhyay (@AmitavaChats), the GlaxoSmithKline Chaired Professor of Corporate Innovation at INSEAD, “C.K. Prahalad likened the distribution of wealth and income to a pyramid, with a small number of affluent individuals at the top and a large base made up of the poor in emerging markets. Although poor, the bottom of the pyramid (BOP), he argued, is potentially a huge market.”[1] Professor Chattopadhyay is a proponent of innovative compete-from-below strategies for businesses. In his article, he discusses how the drug company Novartis was able to “reach the underserved in a more scalable and sustainable fashion, while pursuing its strategic priorities of innovation and growth.” He notes that Novartis was “inspired by the success of several multinational companies such as Hindustan Unilever and Coca-Cola.” Often large, multinational companies are vilified for their lack of commitment to the underserved. These companies have demonstrated that being large doesn’t mean being uncaring.

In Novartis’ case, the company established an organization called Arogya Parivar, which means “Healthy Family” in Hindi. Arogya Parivar is an “outsourced, separately managed entity, operating independently of Novartis, a move that proved vital to its success in building alliances with non-traditional partners.” The organization hired and trained people as health educators who could serve the poor. Chattopadhyay continues:

“Arogya Parivar’s main aim was to create awareness of these diseases [i.e., tuberculosis, nutrition, allergies and infectious diseases] and the existence of treatment so that people could get screened and diagnosed if they had concerns. The health educators targeted community meetings to educate local residents. … On the distribution side, Arogya Parivar worked to develop a network of doctors to take on patients as well as a network of chemists/pharmacists to stock relevant products using sales supervisors. It also had to contend with vast infrastructure shortfalls to get to this end consumer in the first place. … But there were challenges at every step of the journey, such as affordability. Given the rural populace typically earned weekly wages and prescribed medicine was expensive, small packets of medicine was a consideration, but that made compliance more difficult. If a patient felt better after a few days, they would stop coming back for the rest of the recommended dosage. Changing a preference for traditional remedies was also a major challenge. … The factors of Arogya Parivar’s success have been:

As organisations and executives ponder approaches to these complex emerging markets, the key tenets of success are a very deep understanding of the local market and a willingness to break the corporate mould.”

One of the things that stands out in Chattopadhyay’s case study is the fact that Novartis understood the circumstances of the group it was trying to reach. Understanding is often difficult; but, big data is helping usher in an era in which understanding can be better and more quickly achieved. In a study authored by researchers from the World Bank (Andrea Coppola and Oscar CalvoGonzalez) and SecondMuse associates (Elizabeth Sabet, Natalia Arjomand, Ryan Siegel, Carrie Freeman, and Neisan Massarrat), one important point that is made is that understanding doesn’t begin with the data it begins with a question. “To make effective use of big data,” the authors write, “many practitioners emphasize the importance of beginning with a question instead of the data itself. A question clarifies the purpose of utilizing big data — whether it is for awareness, understanding, and/or forecasting.”[2] As I have frequently insisted, good solutions always begin with good questions. Big data doesn’t change that truism. The authors go on to caution:

“Big data is no panacea. Having a nuanced understanding of the challenges to apply big data in development will actually help to make the most of it. First, being able to count on plenty of data does not mean that you have the right data; and biased data could lead to misleading conclusions. Second, the risks of spurious correlations increase with the amount of data used. Third, sectoral expertise remains critical regardless of the amount of data available.”

Having noted all those cautions, big data can nevertheless play an important role in helping development organizations and large companies serve people living at the bottom of the economic pyramid. The authors conclude:

When addressing complex problems, the goal is to understand and deal with the causes of the problems not just the symptoms. The objective of development is to help people claw their way out of poverty and improve their quality of life. To achieve that goal development must lead to economic growth that positively affects the economic pyramid from top to bottom. Bryan Mezue (@bcmezue) insists, “Innovation drives economic growth.”[3] He continues:

“This logic has risen to dominate the discourse in development circles, with government leaders, policy influencers, and development-minded business leaders fully embracing innovation as a panacea for unemployment and economic underperformance. … But does greater innovation equal sustained macroeconomic growth and prosperity, all the time or even most of the time? This question requires urgent clarification and may well be the difference between the developing nations that replicate the blistering success of China and the East Asian tigers, and those that crumble under the weight of their demographic booms. There is reason to believe that while innovation can be pivotal to macroeconomic prosperity, not all kinds of innovation are created equal.”

Mezue asserts that there are three types of innovations in which organizations invest. They are: sustaining, efficiency, and market-creating investments. “Of these,” Mezue writes, “sustaining innovations (which replace old products with new and better ones) and efficiency innovations (which allow companies to make and sell established products for less) help companies serve their existing customers better, but do not address the needs of the majority of the population.” In previous articles that have discussed products intended for sale to those at the base of the pyramid, I’ve made a similar point. People living in poverty often require different products than those offered to more prosperous individuals. Even when the poor can use the same products, they need them packaged and sold in different quantities. Big data can help companies figure out what is needed and how to produce it. Mezue, however, focuses on the third type of innovation — market-creating innovations. He writes:

“Market-creating innovations … are primarily focused at making products and services accessible to non-consumers or those who are under-served. … Market-creating innovations offer rapid growth and job creation, and by definition impact a larger swath of the population. Not only do they build new domestic value networks from scratch, but, when executed successfully, some market-creating innovations can be disruptive in foreign markets. The defensible cost models they develop and their knack for going after non-consumption often blindsides global competitors. This allows tiny economies to punch above their weight and build globally relevant companies. Because companies and entrepreneurs are the vehicles for innovation, leaders in developing nations are right in reviewing how policy and other factors drive innovation. However, our research calls for a more intelligent approach towards the promotion of innovation. Rather than seeking innovation for its own sake, there needs to be a clear priority for the right kind of innovation. Market-creating innovations are almost always harder to execute — in pursuing non-consumers, they are more often bound to the myriad infrastructural and social challenges that most developing nations face. They do not come together automatically; executing them consistently and successfully requires unparalleled collaboration between policymakers, investors, entrepreneurs and other stakeholders — but the rewards are more than worth it.”

Trying to reach and serve those living at the bottom of the pyramid requires our best efforts and our best tools. Big data is one of the tools that can be usefully employed to help stakeholders understand and address the challenges that face those who continue to struggle to free themselves from poverty’s grasp.