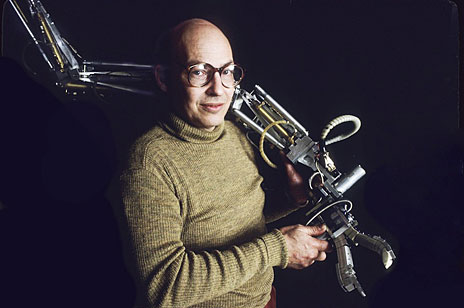 As world leaders and thinkers meet in Davos, Switzerland, to discuss how the Fourth Industrial Revolution is going to affect society, the world learned of the passing of Marvin Lee Minsky (9 August 1927 – 24 January 2016), one of the men who created the technologies upon which that revolution will be founded. Professor Minsky was and American cognitive scientist in the field of artificial intelligence (AI) and co-founder of the Massachusetts Institute of Technology’s AI laboratory. Professor Minsky’s MIT web page briefly sums up his enormous contributions:

“Marvin Minsky has made many contributions to AI, cognitive psychology, mathematics, computational linguistics, robotics, and optics. In recent years he has worked chiefly on imparting to machines the human capacity for commonsense reasoning. His conception of human intellectual structure and function is presented in two books: The Emotion Machine and The Society of Mind (which is also the title of the course he teaches at MIT). He received the BA and PhD in mathematics at Harvard (1950) and Princeton (1954). In 1951 he built the SNARC, the first neural network simulator. His other inventions include mechanical arms, hands and other robotic devices, the Confocal Scanning Microscope, the ‘Muse’ synthesizer for musical variations (with E. Fredkin), and one of the first LOGO ‘turtles’. A member of the NAS, NAE and Argentine NAS, he received the ACM Turing Award, the MIT Killian Award, the Japan Prize, the IJCAI Research Excellence Award, the Rank Prize and the Robert Wood Prize for Optoelectronics, and the Benjamin Franklin Medal.”

The late Isaac Asimov described Professor Minsky as one of only two people he would admit were more intelligent than he was, the other being Carl Sagan.[1] You can get a good sense of the man from a TED talk he gave in 2003.

Last year Will Knight (@willknight) interviewed Professor Minsky.[2] As a preface to that interview, Knight wrote:

“Marvin Minsky is one of the founding fathers of artificial intelligence, and over the past 60 years he has made key contributions in mathematics, robotics, computer graphics, machine perception, and machine learning. I was lucky enough to be invited to meet recently with Minsky at his home in Brookline, Massachusetts, and I took a videographer to capture the conversation. It was a charming, slightly surreal experience. After all, it’s unusual to meet someone who was on a first-name basis with John von Neumann, Claude Shannon, and Albert Einstein. And despite being unwell for the past couple of years, Minsky, 88, hasn’t lost his playful sense of humor.”

If you watched the video, you know that Minsky’s humor could be both playful and cutting. It irritated him that researchers were always looking for magic bullet solutions to difficult challenges. His expressed his frustration in a 2011 interview with Nova.[3]

“How hard is it to build an intelligent machine? I don’t think it’s so hard, but that’s my opinion, and I’ve written two books on how I think one should do it. The basic idea I promote is that you mustn’t look for a magic bullet. You mustn’t look for one wonderful way to solve all problems. Instead you want to look for 20 or 30 ways to solve different kinds of problems. And to build some kind of higher administrative device that figures out what kind of problem you have and what method to use. Now, if you take any particular researcher today, it’s very unlikely that that researcher is going to work on this architectural level of what the thinking machine should be like. Instead a typical researcher says, ‘I have a new way to use statistics to solve all problems.’ Or: ‘I have a new way to make a system that imitates evolution. It does trials and finds the things that work and remembers the things that don’t and gets better that way.’ And another one says, ‘It’s going to use formal logic and reasoning of a certain kind, and it will figure out everything.’ So each researcher today is likely to have one particular idea, and that researcher is trying to show that he or she can make a machine that will solve all problems in that way. I think this is a disease that has spread through my profession. Each practitioner thinks there’s one magic way to get a machine to be smart, and so they’re all wasting their time in a sense. On the other hand, each of them is improving some particular method, so maybe someday in the near future, or maybe it’s two generations away, someone else will come around and say, ‘Let’s put all these together,’ and then it will be smart.”

To say that Marvin Minsky was “smart” is an understatement. He was brilliant. Joel Achenbach (@joelachenbach) reported that Minsky’s death was announced by Nicholas Negroponte, founder of the MIT Media Lab, who distributed an email to his colleagues.[3] That email stated:

“With great great sadness, I have to report that Marvin Minsky died last night. The world has lost one of its greatest minds in science. As a founding faculty member of the Media Lab he brought equal measures of humour and deep thinking, always seeing the world differently. He taught us that the difficult is often easy, but the easy can be really hard.”

Achenbach also published a tribute from one of Minsky’s former students, Patrick Winston, now a professor at MIT. Winston wrote:

“Many years ago, when I was a student casting about for what I wanted to do, I wandered into one of Marvin’s classes. Magic happened. I was awed and inspired. I left that class saying to myself, ‘I want to do what he does.’…People came to MIT’s Artificial Intelligence Laboratory from everywhere to benefit from his wisdom and to enjoy his deep insights, lightning-fast analyses, and clever jokes. They all understood they were witnessing an exciting scientific revolution. They all wanted to be part of it.”

Although I wasn’t personally acquainted with Professor Minsky, as President and CEO of a cognitive computing firm, I understand how indebted I am to this giant in the field of artificial intelligence. I join with the world in mourning his loss and extend my sincerest condolences to his family and friends. Rest in peace Professor Minsky.